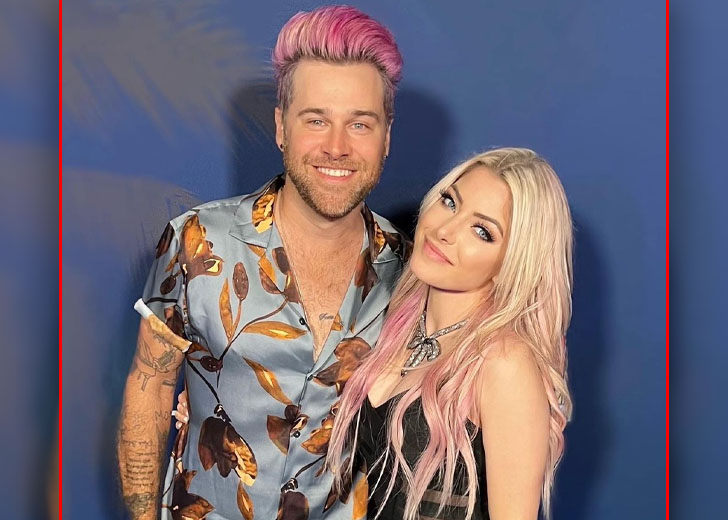 It’s indeed “A Moment of Bliss” for Alexa Bliss, aka Lexi Kaufman!

The WWE superstar is now married to her fiance Ryan Cabrera. The duo shared the wedding vows on April 9, 2022, in an event held at the Kempa Villa in Palm Desert, California.

People Magazine was the first to exclusively announce the news on the same day of the wedding. Several pictures from Bliss and Cabrera’s wedding were also shared by the outlet and by Bliss on her social media handles.

On Instagram, the former Raw Women’s Champion shared three pictures alongside her musician husband. The first one was of the couple walking down the aisle, and the remaining two seemed to be after they tied the knots.

“Congrats girl!!!!!” wrote another WWE superstar Leah Van Dale [aka Carmella], who got married to her partner Matthew Polinsky [aka Corey Graves] just a day before, on April 8.

Furthermore, one fan of Bliss wrote, “Congratulations. I wish you two a lifetime of happiness and hope everything goes well for the both of you on this journey you’re gonna have together.”

Coming back to the wedding, Bliss looked absolutely stunning in her custom dress designed by Netta BenShabu in blush. With her wedding dress, she opted for a Swarovski headpiece – not a veil – that went in the back of her hair.

Likewise, 360 guests were invited to Bliss and Cabrera’s “very non-traditional” and “rockstar” themed wedding — the initial number of guests was 608. “Our wedding has been self-deemed ‘the s— show,” Cabrera said to People.

As the wedding went on, the duo’s respective family members and the bridal plus groom party walked down the aisle to different music. When the time came for the bride to make her entrance, Worth It by Cabrera was played – which Cabrera wrote for his proposal.

He said, “I’m just trying to figure out how I’m going to get through this because it’s such an emotional song. I don’t think she understands, because we were talking about doing our vows, and I was like, ‘Maybe we should do it in private.'”

Alexa Bliss and her husband, Ryan Cabrera, at their wedding (Photo: Instagram / People)

Two weeks before their wedding, the bride and groom had already prepared their vows. Cabrera told People that his vows came to him during his 4 a.m. dream, where he was reading the vows to Bliss.

“I was uncontrollably crying, but I was reading the vows, and I was like, ‘Oh, that’s good stuff!’ So I woke up in the middle of the night and started jotting it down. That led to writing more and more and more.”

As for Bliss, she mentioned in the interview that she wants to go first and read her vows as she is not a writer and doesn’t want to follow her husband’s vows.

Just a night before the wedding, Bliss and Cabrera had a quality time together. As per the musician, he said this to his wrestler wife, “Wedding night, babe, I am partying. You’re not getting no action that night. So you better get it the night before.”

“I’m just being honest. I’m partying hard after the ceremony. I would be shocked if I don’t end up in that lake.”

Following their wedding, there was a huge reception, party, and several more events that the couple had already planned. And, the afterparty seems to be still going on as the newlyweds have a lot of plans.

Bliss and Cabrera first knew each other when they sparked romance rumors – they didn’t even know each other back then. These speculations led them to talk, become close, and eventually start dating in November 2019.

On their meetaversary, November 15, 2020, Cabrera proposed to Bliss, and they got engaged. Since then, they have always been together and in love. They had also been making plans for their wedding after that day.

Recently, on February 28, 2022, Bliss shared a series of snaps from her bachelorette party in Las Vegas – hinting that the wedding was near. Reports hinted that the wedding would happen after WWE’s biggest event, Wrestlemania 38, was held on April 2–3, 2022.

And as the reports suggested, Bliss and Cabrera’s wedding took place a week after the first night of Wrestlemania 38.