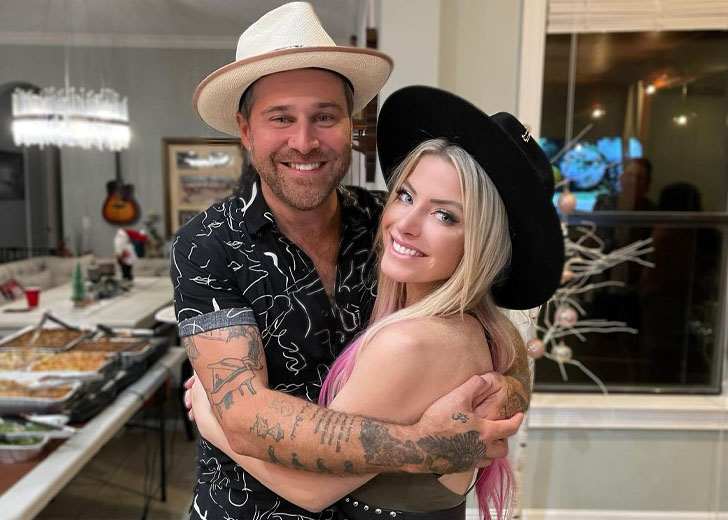 An inside look at Lexi Kaufman, aka Alexa Bliss and her fiance Ryan Cabrera’s relationship.

Lexi Kaufman, whose birth name is Alexis Kaufman, is a talented American professional wrestler who has been signed with WWE since she arrived at the company in 2016. She currently competes under the Raw brand.

She is commonly known by her in-ring name – Alexa Bliss. Since joining WWE under the SmackDown brand, she has become a five-time Women’s Champion, two-time Women’s Tag Team Champion, and one-time Money in the Bank ladder match-winner.

The list of her accolades goes on and on, with Bliss achieving those feats in a limited time. And while her career at WWE sounds fun and flourishing, her personal life might be a little ahead of that.

The WWE superstar has been in a romantic relationship with her future husband, Ryan Cabrera, an American musician. Here is an in-depth look at their togetherness!

Bliss and Cabrera’s relationship initiation is quite the funny and memorable one. The couple started dating each other in November 2019.

However, they didn’t even know each other before they got together. It all started when WWE fans started gossiping that Bliss and Cabrera were a thing. Speaking about that moment with ET Online, Bliss said:

“We met because there was a rumor that we were dating and we didn’t know each other yet, so whoever was running his social media at the time was liking a bunch of my tweets.”

She then mentioned the passion that the WWE fans have and that they are very invested in what goes in the in-ring character and the personal life of a WWE superstar. “So there were a few people that made these Instagram accounts saying that we were dating and tagged all of our friends.”

After seeing those rumors going around, fellow WWE superstar Mike “The Miz” Mizanin decided to find out the truth and called Cabrera – with whom he has a good friendship. Recalling the conversation, Bliss said:

With all those talks going around, Bliss and Cabrera finally decided to know each other and have some conversations. So, on November 13, 2019, they talked to each other first time, and two days later, they met face to face.

Their first meet was at a show at Epcot. As they got along, they became good friends, which eventually turned into “the most incredible” relationship.

Alexa Bliss and Ryan Cabrera got engaged on their meetaversary

After Bliss and Cabrera started dating, things began to roll out quite amazingly. They were in love, and it was evident through all of their social media handles, where they often featured each other.

And just one year after their first meeting, they took a step forward in their relationship. On their meetaversary, November 15, 2020, they were on a romantic date, and it was then that Cabrera got down on his knees and proposed to Bliss.

She said yes, and it initiated another chapter in their relationship. The musician had taken to his Instagram stories to share a picture of him proposing to his now-fiance. The WWE superstar took a screenshot of that story and shared it on her Instagram and Twitter handle.

“One year ago we said hello, tonight I said YES,” she captioned her post. Since then, the couple has always been together. And it seems like the day is almost near when the two will walk down the aisle.

During the above-mentioned interview, Bliss mentioned that her to-be husband was putting in work to make their wedding day unforgettable. “Everyone that knows us and knows Ryan, knows that it is Ryan’s wedding. I am not a wedding person, I never have been,” she added.

Additionally, she recalled what her fiance told her during their engagement and said, “He told me when we got engaged that you just have to show up, and I didn’t really believe him, but now I truly believe him.”

“Because even my mom and my best friend are like, ‘we don’t know what’s going on with the wedding,’ and I was like, ‘I don’t know either,’ but I know a majority of it is planned already. Ryan’s got it taken care of.”

She then stated that Cabrera has been waiting for his wedding day like forever, and he is willing to plan everything. “Luckily, we have the same interests and same likes. All the way down to my dress. He helped me get it designed, and he’s been incredible,” she concluded.

Most recently, on February 28, 2022, Bliss shared a series of pictures via Instagram from a memorable event of her life — her bachelorette party held at Las Vegas-based Mandalay Bay Resort and Casino.

Since then, she has shared several pictures with her partner. Currently, there has been no news of the duo’s marriage date. But, considering their smooth relationship, the marriage will also come soon.

In the past, Bliss was engaged to be married to the former WWE superstar Matthew Adams, renowned by his ring name of Buddy Murphy – now goes by Buddy Matthews. The details of their togetherness remain undisclosed for now.

But, it has been reported that the two were even engaged. However, they parted ways sometime in early 2018 due to undisclosed reasons. Despite their split, they remained good friends.

Besides that, there are no reports of Bliss being in a relationship with anyone. Furthermore, she has never been married and thus doesn’t have an ex-husband.