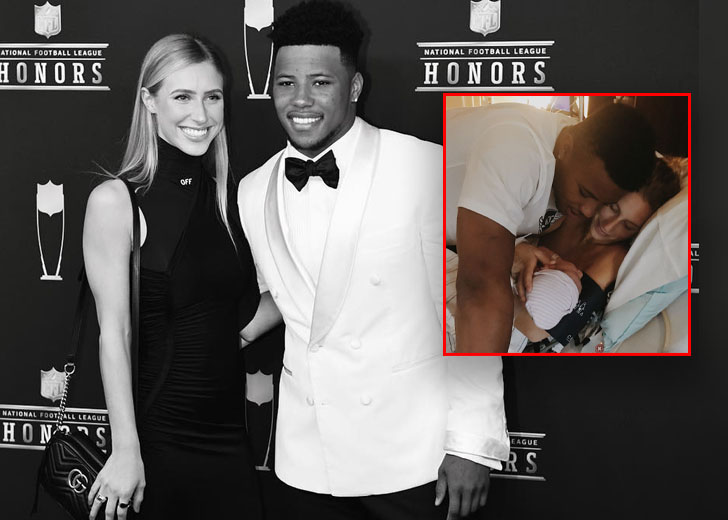 Saquon Barkley has been a subject of discussion among the New Yorkers as they see him every week on the field and play for the NFL team New York Giants – he joined the team in 2018.

Among the things discussed, the fans have particularly taken an interest in the 25-year-old running back’s personal life.

And as Barkley could occasionally be seen flaunting pictures with his baby daughter via Instagram, many have wondered if the American footballer has a wife.

Saquon Barkley welcomed his child days before his NFL draft

The April of 2018 was a special month for Barkley as two of his biggest dreams were fulfilled. First, he was about to be a father. And second, he was heading into the 2018 NFL draft with high chances of being one of the top 10 draft picks.

However, at one moment, it seemed he would have to miss either one of them. While the footballer didn’t want to miss the birth of his daughter, he also wanted to be in New York for the NFL Draft.

Nonetheless, family always came first for Barkley. In a piece that he wrote for The Players’ Tribune, he mentioned, “I’m at a hospital in Pennsylvania. My girlfriend is pregnant. I’m worried she’s going to give birth on the same day I’m supposed to be in New York for the draft.”

“Actually, I’m not worried. I mean, if it’s between the draft and my daughter’s birth, my little girl is gonna win. Getting drafted is a dream come true. But as much as I love football, family is always first.”

Thankfully, he didn’t have to choose between either of them. On April 24, 2018, Barkley became a father to an adorable baby girl named Jada Clare Barkley. Two days later, on April 26, he was in attendance at the NFL Draft, where he got picked 2nd overall.

Since the birth of Jada, Barkley could occasionally be seen taking his daughter to multiple events and flaunting pictures via his social media handles.

Coming back to Barkley’s personal life, he is yet to share the wedding vows and settle down with a wife. But, that doesn’t mean he doesn’t have a significant other in his life.

The 6 feet tall running back has been in a longtime relationship with his girlfriend, Anna Congdon. There were talks that the duo was married, but that’s not true. Additionally, Congdon is the mother of Barkley’s daughter.

Saquon Barkley with his girlfriend Anna Congdon and their baby (Photo: Instagram)

The couple first met each other at the Pennsylvania State University. At that time, Barkley played college football for the university’s men’s football team, whereas his now-girlfriend was pursuing a nursing degree.

The two subsequently began dating in 2017 and welcomed a child together in April 2018. Since then, the parents of one have always been together despite all the cheating rumors going around.

The Giants player had sparked infidelity rumors when he was seen partying with American model Josie Canseco. Similarly, some weeks later, he was seen cozying up with Stassie Karanikolaou, a friend of Kylie Jenner.

There were several photographic evidence of Barkley having intimate moments with Canseco and Karanikolaou. These led some to believe that the relationship between Barkley and his partner would end up negatively.

However, none of that has happened to this date. Instead, the couple’s togetherness seems stronger than ever, and they are committed to staying as a family of three.

Who is Saquon Barkley’s girlfriend?

Barkley’s girlfriend, Congdon, is an internet personality and a self-made model. But, she came into prominence through her relationship with her now-boyfriend.

Besides being a model, it’s reported that she has been working with a mobile photography application for IOS and android devices called VSCO. Through her work, she has gained a healthy following – she has over 92,500 followers on her verified Instagram handle.

Born in 1998 in Forest City, Pennsylvania, she celebrates her birthday on June 6 every year. She is the daughter of her parents named, Daniel Congdon and Kathleen Congdon.

Apart from her parents, she has two siblings: a brother named Dann Congdon and a sister named Cassidy Congdon.

Speaking of her education, she initially attended Forest High School and then enrolled at Penn State University for a nursing degree.