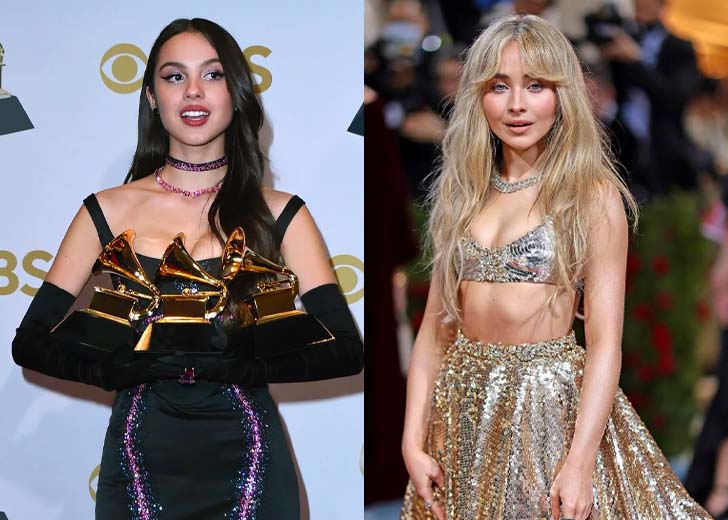 Olivia Rodrigo was once a fan of Sabrina Carpenter.

The 19-year-old Bizaardvark alum Olivia Rodrigo made waves all over social media in January 2021 when she released her debut track, ‘Driver’s License.’

The successful song connected with Rodrigo’s fans, including Taylor Swift, but it also led others to believe it was about her, Joshua Bassett and Sabrina Carpenter.

But sometime later, Carpenter faced severe cyberbullying due to her reported relationship with Olivia Rodrigo’s ex-boyfriend, Bassett. But neither of them has confirmed having a relationship.

Learn about their friendship, alleged love triangle, and more.

Olivia Rodrigo was a fan of Sabrina Carpenter

Before all the drama started between Rodrigo and Carpenter, they were friends. Both of them are Disney child-star, and they even appeared in an interview together back in 2016.

Rodrigo has even admitted she was a fan of Carpenter and was seen fangirling over Carpenter in her TikTok videos back in the days before their love triangle involving another Disney star, Bassett, went viral on the internet.

In the viral TikTok video, Rodrigo is seen fangirling over Carpenter, sharing she loved the other diva and lipsyncing on her songs.

While the song’s lyrics resonated with many who had been heartbroken, listeners were particularly drawn to the phrase, “You’re probably with that blonde girl.”

When Rodrigo’s fans realized what had happened, they flocked in droves to Carpenter’s social media. The harassment was already going on for months and worsened on her 22nd birthday. One of the actress’s birthday posts was filled with Rodrigo’s song lyrics.

Overwhelmed by the vitriol, the actress claimed on her Instagram story that she was on the verge of a nervous breakdown. “I’m not sure when in my career I’m meant to go on Instagram Live and cry, but I feel like I’m getting pretty close,” she explained.

Sabrina Carpenter clapped back at ‘Driver’s Licence’ with a song

If you are shaded in a song, it’s only natural to answer with a song, precisely what the Grace Stirs Up Success star did.

Despite her claims to the contrary, the song’s lyrics looked to be addressed toward Rodrigo. Carpenter sings at the song’s beginning, “Maybe you didn’t mean it / Maybe blonde was the only rhyme.”

According to People, Rodrigo and Carpenter were seen chatting at the 2022’s Met Gala in New York City by a Vogue photographer in a blink-and-you’ll-miss-it sequence, more than a year after their reported love triangle turmoil with Bassett.

The main focus in the carousel shot is actor Sebastian Stan, with Kim Kardashian to his left. To his right, though, Carpenter’s back is to the camera, and Rodrigo converses with her.

How To Dress Fashionably As A Student