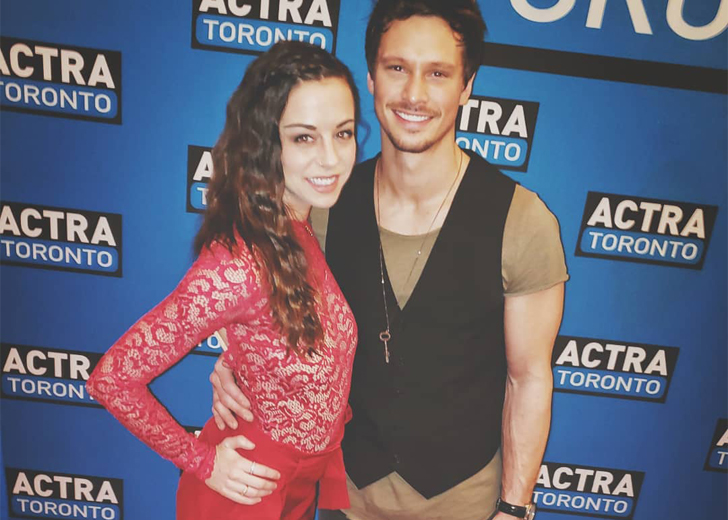 Like many others in the glamour world, the Canadian actor Greg Hovanessian prefers to keep his love life away from the public eye.

Despite that, his relationship is known to many, and the actor himself has talked about his girlfriend, Tanya Bevan, in a few instances. The actor once shared the story of his early days of the relationship, which sounded very adorable.

Speaking on Hallmark Channel’s YouTube show ‘Home & Family’ in October 2019, the When Hope Calls star shared that he felt something about his girlfriend when he first saw her.

But when the couple went out for their first date in 2018, it, according to Hovanessian, was a “really really awkward first date.”

He described that both had come from recent breakups and were not ready for another relationship, which worsened their first date together.

However, his feeling of “something about her” was constant and kept him drawn toward her. And although he did not understand what that feeling was, he kept on going for her.

Hovanessian further described his second date with Bevan, an actress, and how things started to fall perfectly for them.

“The second, I guess, date we went on it was like all the guards just dropped, and from there it was just like…when you find that it’s like hang on to it really,” he explained.

At the time of the interview, Hovanessian and his girlfriend Bevan were dating for about a year, making their relationship two and a half years old presently.

From that day to the present, the two have been together and compliments each other very well.

The two walked down the red carpet at the 17th Annual ACTRA Awards in February 2019. Hovanessian also often shares pictures with Bevan on his social media, which shows their chemistry.

On Valentine’s Day 2019, the actor posted Bevan’s solo pictures and expressed his life for her. He said that he felt shockingly good to end up being with her whom he cited as “a metamorphic and transformative gift.”

“Every day at one point I have a little moment where I ponder this question with this perplexed look on my face,” he added.  “She is just…seriously something else. Happy Valentine’s Day to this anomaly who has redefined so much of what I know.”

Tanya Bevan is a Canadian actress who has appeared as Vanessa in Hallmark‘s TV series Good Witch, Annie Beckett in the CBC TV series Murdoch Mysteries, and Sam in the indie feature film Ashes.

Her last release was 2019’s TV movie Christmas Scavenger Hunt, where she portrayed the role of Allison.

She was born in Windsor, Ontario Canada, and attended the Walkerville Centre for the Creative Arts. The actress majored in acting, dancing, and singing.

She relatively manages more low key private life than her actor boyfriend. She has over 200 follows on Instagram, too.

The idea behind claiming Bevan as Hovanessian’s potential wife is that they seem like made for each other forever thing. Even their chemistry suggests that the wedding bells are not so far away.