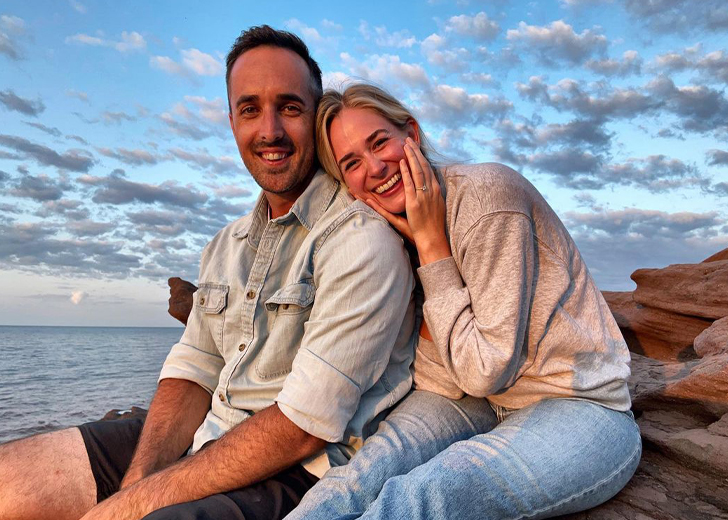 Congratulations to Canadian actress Brittany Bristow who recently got engaged to her long-time boyfriend, Dustin Keating.

The big news was announced a couple of weeks ago, on August 17, 2021, via the actress’s official Instagram handle.

She posted a couple of pictures alongside her fiancé, where the pair sat on the rocks in front of the ocean. Not only was the scenery witnessed through the picture, but the shining engagement ring on Bristow’s ring finger was also visibly seen.

Through the caption, the Toronto, Ontario native gave an additional idea on her engagement with Keating. In it, she mentioned that Keating asked her to marry him on their second dating anniversary, August 15, 2021.

But, as Bristow was not sure if Keating was really asking, though she wanted it to be true, she herself asked him if it was really happening. To that, Keating said yes, and they got engaged. The caption ended with the hashtag “hesaidyes.”

After the amazing news was announced, many celebrities and fans took to the comment section to congratulate the newly engaged couple.

When Hope Calls actress and Bristow’s fellow co-star, Morgan Kohan, was one of them as she commented, “My heart just grew two sizes seeing this. Congrats you wonderful people!!!!”

“MY GIRL IS ENGAGED!!!!! Congrats!!!!!! You’re going to be such a gorgeous bride!!!!!,” wrote the correspondent of Entertainment Tonight, Deidre Behar.

The fans of the Canadian actress were very much happy too. One fan took to the comment section and said, “Yay!!!! I’m so happy for you two. Congratulations!”

However, Bristow’s Instagram handle wasn’t the only one that was filled with well-wishes and congratulatory messages as her fiance, Keating’s Instagram was also filled with the same kind of messages.

On the same day Bristow announced her engagement news, Keating also did the same via his Instagram handle. He shared the same pictures Bristow posted but with a different caption.

The caption said, “Future’s so bright that we gotta wear shades. Anyone knows how to plan a wedding?” After reading the caption, it was almost clear that the newly engaged couple is now setting their eyes on the lovely wedding.

Well, the wedding bells might be near for Bristow and Keating, and we wish them nothing but the absolute best for their married life in the future.

The Marijuana Conspiracy movie actress began dating her soon-to-be husband on August 17, 2019. She initially kept her relationship details up to herself only. About a month later, on September 22, 2019, she teased him via an Instagram post.

On October 4, 2019, she finally introduced her partner to the world by posting a picture alongside him on Instagram. Since then, they have been together, relishing their togetherness.