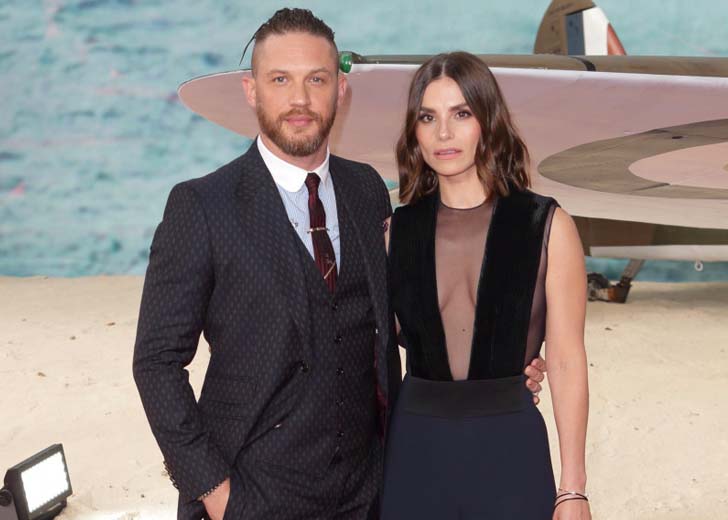 Acclaimed English actor Tom Hardy has always been private when it comes to revealing details about his married life with his girlfriend turned wife Charlotte Riley.

The now-married couple first met each other while working together on the 2009 TV mini-series titled Wuthering Heights. In the show, Hardy portrayed the role of Heathcliff whereas Riley played the role of Cathy.

Although the couple met while working together, and Hardy being a charismatic man, sparks didn’t fly instantly. Speaking with Daily Mail, Riley described their initial meeting as, “It wasn’t love at first cup. In fact, I was a bit unnerved when he switched into Charles Bronson.”

Nonetheless, things slowly started to brew between them as they went on multiple coffee dates, and eventually, they started dating. But, the initiation of their relationship was met with cheating allegations against Hardy.

There were rumors that The Dark Knight Rises star was cheating on his former partner Rachael Speed. It was said that Hardy was already dating Riley while he was still together with Speed and expecting a son with her.

And it all started after Hardy and Speed broke up in 2009, after five years of togetherness, and started dating Riley in the same year. However, neither Hardy nor Riley have spoken about these speculations from the beginning of their togetherness to now.

Tom Hardy and Charlotte Riley got married in 2014

Despite the cheating allegations, Hardy and Riley started together and continued with their relationship. They ultimately got engaged around 2010.

And around five years after they started dating, they got married. On July 4, 2014, the engaged couple walked down the aisle to share the wedding vows in a private Château de Roussan wedding held in France.

There was no news of their wedding as it was very private and only certain guests such as close friends and immediate family members were only invited. Among the limited guests, one was Hardy’s former girlfriend Rachael Speed – so the cheating allegations don’t seem to be true.

The news of their wedding was only revealed to the media and public when a family member revealed it to a reporter. If that hadn’t happened, it was almost certain that the world wouldn’t have known about the love birds tying the knots.

Since their marriage, Hardy and Riley have always been together and supported each other in every condition. But, as both of them are very private about their personal lives, they have always kept things under the wraps and revealed only small details.

The level of privacy they have opted for was already proven through their private wedding, and it was once again made known when the married couple welcomed children. As of now, Hardy and Riley are parents to their two biological children.

They first welcomed a daughter in 2015, but to this date, no details about her have been made public — including her name. In December 2018, the couple welcomed another child, a son named Forrest — named after Hardy’s character, Forrest Bondurant, in the movie Lawless.

Besides that, the couple is also parents to Hardy’s son with Speed named Louis Thomas Hardy. Riley has maintained a good relationship with her stepson.

As of this writing, Hardy and Riley have been married for more than seven years, and they will celebrate eight years of marital relationship on this year’s July 4.

By now, some of you might have already guessed that Hardy’s wife, Riley, is an actress. She hails from Grindon, United Kingdom, and is known for her amazing performances in multiple acting gigs.

Some of her renowned movies and TV shows include Easy Virtue, Wuthering Heights, World Without End, Edge of Tomorrow, King Charles III, Trust, Swimming with Men, Dark Heart, and A Christmas Carol.

Additionally, she has made her appearance in the hit BBC gangster drama Peaky Blinders, in which Hardy portrays the recurring role of Alfie Solomons. Recently, Hardy reprised his role in the sixth and final season of the show, but as Riley’s character’s arc ended, she didn’t return.

Born on December 29, 1981, as Charlotte Frances Riley, the 5 feet 5 inches tall actress was brought up in Grindon, County Durham. Her father’s name is Michael Riley, and her mother’s name is Margaret Riley. Besides her parents, she has two siblings named Simon Riley and Joanne Riley.

A brief look at Tom Hardy’s past relationships

Before getting engaged and married to his present wife, the Venom star was in a couple of relationships.

He was first married to a producer named Sarah Ward. They tied the knots in 1999 and parted ways around five years later, in 2004.

One year after his divorce, the actor met director Rachael Speed on the sets of the 2006 TV show The Virgin Queen. They eventually started dating and welcomed a son, Louis Thomas Hardy, in April 2008.

However, things didn’t go well between the parents of one as they parted ways in 2009 after five years of togetherness.