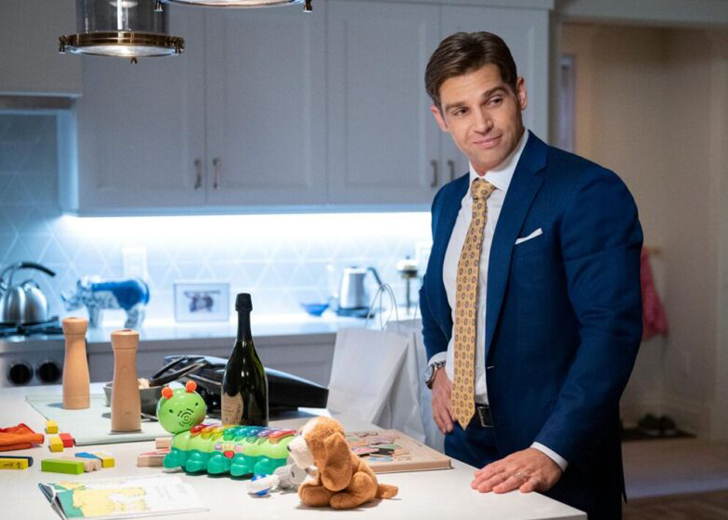 The 8-episodes series is currently trending in different countries and has received a good response from the viewers.

Vogel Started His Career as a Model

The Abington, Pennsylvania native currently has a flourishing career as an actor and producer. However, the entertainment industry wasn’t his first career line.

During his high school days, Vogel used to work as a wrestler to make a living. Soon, the interest in wrestling faded out, and he began playing music. But that line of work also didn’t last long.

Eventually, he re-started his professional career as a model. As a model, he appeared in commercial ads for different brands, including Levi Strauss & Co., aka Levi’s.

Started Acting in the Early 2000s

After choosing different career paths in his early days, Vogel ultimately decided to pursue a career in the entertainment industry. He enrolled at the Lynette Sheldon Actors’ Studio in New York and completed his acting graduation.

Following some years of struggle, he made his television debut in 2001, portraying the role of Dean Piramatti in the TV series titled Grounded for Life.

He continued to portray the same role for the upcoming years, till the show ended in 2004.

While being associated with the show, he also appeared in some movies. In 2003, he made his big-screen debut through Grind—appeared as Eric Rivers.

In that same year, he also made his appearance in Wuthering Heights, The Texas Chainsaw Massacre, and The Donnas: Too Bad About Your Girl.

As time passed, his popularity grew and he was cast in a number of acting gigs. Some of his acting credits from 2005 to 2015 include The Sisterhood of the Travelling Pants, Poseidon, Cloverfield, She’s Out of My League, Bates Motel, Under the Dome, and Childhood’s End.

Thereafter, his acting credits decreased a little bit. Some of the movies and TV series in which he appeared after 2015 are The Case for Christ, The Brave, Secret Obsession, and Fantasy Island.

His most recent acting gig was in Netflix’s Sex/Life, which premiered on June 25, 2021. The 41-year-old Vogel has also worked as a producer and has produced two short movies and one movie.

As of now, he has two more upcoming acting gigs: Collection (as Ross) and Triangle (David Roman).

He Wanted to Be a Fighter Pilot

The 5 feet 9 inches tall actor had quite a few options for his career. But his most genuine career path was to be a fighter pilot.

In an interview, Vogel talked about his dream of becoming a fighter pilot. He mentioned that he wanted to be a fighter pilot his whole life. He had even set up all of his classes for it.

However, he got lazy in his senior year in high school and never got his paperwork in.

My whole life, I wanted to be a fighter pilot; it’s what I wanted to do. I set up all of my classes for it, but I got lazy my senior year in high school and didn’t get my paperwork in.

Even though the dream never got fulfilled, he did, however, passed the pilot test and received his pilot license. In an Instagram post of May 12, 2019, he shared a picture of him in front of a plane.

In the caption, he wrote, “Seven years ago today, I finally got my pilot’s license. It was a lot of stops and starts prior to that, and after that, but through it all, it has been an invitation to learn. My obsession with the wild blue yonder has never left me and, God willing, never will.”

Although Vogel worked as a wrestler, singer, and model in his initial days, he made most of his fortune from his acting career.

Thanks to that, he has been living a healthy lifestyle with his wife, Courtney Renee Raborg, and three children: Cassy Renee Vogel, Charlee B. Vogel, and Gabriel James Vogel.

With his good earnings, he is also able to fulfill his dream of buying some luxurious cars.

Presently, Vogel has an estimated net worth of $1 million, as per Celebrity Net Worth.

Who Is Freddie Thorp's Wife? Info on His Age, Dating, and Net Worth