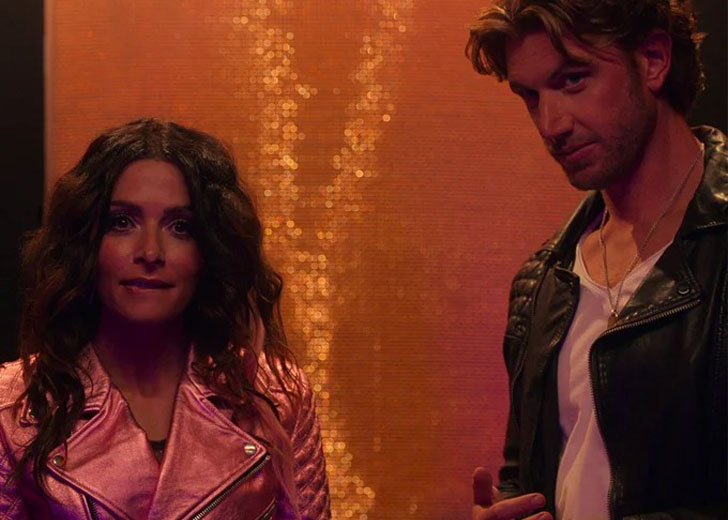 Netflix’s series Sex/Life is the new 50 Shades of Gray or 365 days.

The series is the talk of the town currently, and it won’t be wrong to state that Sex/Life is one of Netflix’s smuttiest works yet.

The steamy triangular romance between fantasizing Billie, played by Sarah Shahi, her straight-laced husband Cooper, played by Mike Vogel, and her villainous ex-boyfriend Brad, played by Adam Demos, is top-notch.

But it turns out the romance between Demos and Shahi [Billie and Brad] isn’t just on-screen. The two are actually romancing in real.

Budding Romance Between the ‘Sex/Life’ Stars

While the romance between Demos and Shahi was the highlight of the series, many didn’t know that the two actors are actually dating in real life.

And you know the reason why their chemistry seemed so real.

A quick look through the Iranian American actress’s Instagram profile shows that she and Demos made their social media debut on December 31, 2020 — close to the time that Sex/Life wrapped filming in Canada.

Shahi even dedicated a Valentine’s Day post to him on February 14, 2021.

“My forever squeeze…happy Valentine’s baby @adam_demos ( can’t not tag @missoni when you’re wearing a dress like that) #happyvalentinesday [red heart emoji],”  she captioned the picture.

The love isn’t one-sided. The Australian actor has also taken to Instagram to express his life for his girlfriend and possibly, soon-to-be wife.

On January 11, 2021, he wished Shahi a happy birthday, stating he loved her. “Happy bday my baby. I [explicit word] love you. You’re everything,” he captioned.

They Made Sure Their Personal Life Didn’t Affect Their Work

Speaking to Leo in June 2021, the Sex/Life stars talked about their love life and how they didn’t let it affect their work.

Demos said that to be employed as an actor is a gift. But meanwhile, he didn’t want to let anyone down because he is dating his co-star.

“Make sure the job is the most important thing,” he added.

“If you fall for someone on set and you really, truly believe you’re meant to be together, then it’s strong enough to survive after the job—but the job is how you met, so make sure you do that justice.”

Shahi also agreed to what her real-life partner quoted and said that they would be watching their work when it airs.

Shahi, who is 41-year-old, was previously married to Steve Howey. They tied the knot on February 7, 2009, in Las Vegas.

The ex-couple welcomed their first child, a son named William Wolf, in July 2009. They opted for an at-home water birth, assisted by a midwife.

The actress announced that she was pregnant with twins in January 2015. Two months later, a daughter named Violet Moon Howey and a son named Knox Blue Howey were born during another home birth.

But the marital relationship did not go well for Shahi and her ex-husband Howey, leading them to file for divorce in May 2020.

Their divorce was officially finalized in January 2021.

As for Demos, the dating records is straight, as he reportedly has no history of getting married to a wife or being involved with a girlfriend before Shahi.