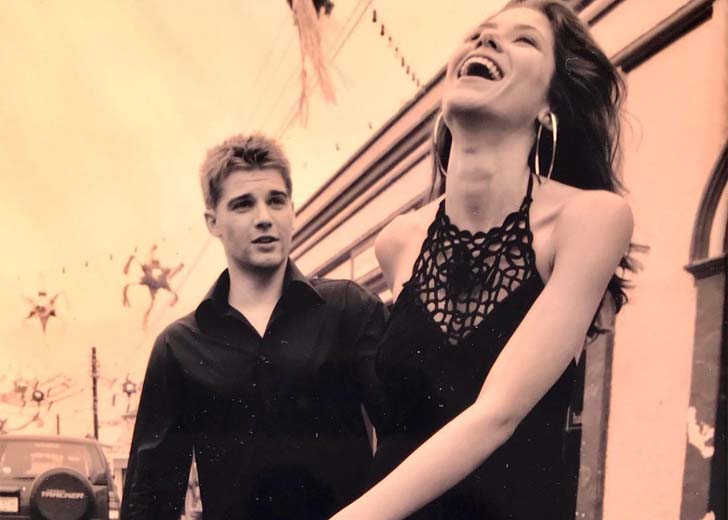 18 years after marriage, Mike Vogel still feels honored to walk down the aisle with his wife.

The Sex/Life actor and his wife Courtney Vogel celebrated their 18th wedding anniversary on January 4, 2021, with Mike posting a couple of adorable pictures and heartwarming caption.

He related the number 18 with various things from across the globe, writing, “18 is a lot of things…It is the number of holes in a full round of golf.”

“In Hebrew, 18 means ‘chai’ or ‘Alive’. Literally, it means life. If you look at your right hand, the creases in your hand form the Arabic number ’18’ (look it up. It’s crazy)…18 is also the age at which most enter adulthood.”

The American actor and former model, Mike further shared that his wife was 18-year-old when he took wedding vows with her.

“She loves Alf reruns and vegetables. I love Hogan’s Heroes reruns and steak. She LOVES the beach. I LOVE the mountains,” he added. “But we LOVE each other.”

Half of her age into the marriage, he felt amazing and blessed to have spent the days of his life with her. To finish off the post, he called her his “chai,” and “life,” saying he cherished and loved her.

Gentleman Husband: Both in Real Life and Series ‘Sex/Life’

Mike, who recently won the audience as Cooper Connelly, a gentleman husband, in Netflix’s Sex/Life, made fans fall in love with him all over again with his real-life love for his wife.

Fans quickly found the similarities between the 41-year-old actor’s real and on-screen traits of being a good husband.

“WhaaAt? Looks like you really are your character in Sex/Life,” one commented. Another chimed, “Oh myyy such a good husband in Sex/life & also in real life.”

No wonder you play “Cooper” with so many true emotion in it. Marriage needs 2 people holding in balance.

Vogel and His Wife Are Parents to Three Children

Their eldest daughter Cassy Renee was born in February 2007, their second daughter Charlee B in June 2009, and their only son Gabriel James in September 2013.

The family of five reside in Nashville, Tennessee.

Mike also writes touching lines for his children on their special day, making him an equally good father, Mike – a family man.

“‪11 years ago today, I became a father for the first time…Such joy, and light and love all wrapped up one little body…I love you Cassy Renee,” he wrote on February 20, 2018, wishing his daughter her 11th birthday.

Welcoming his son in 2013, the actor wrote, “Everyone meet my new son, Gabriel James Vogel!!!! We are blessed! #OurAngel.”

Mike and Courtney first met way back in 2002 at a party that was thrown for those in the modeling industry.

The actor struggled to start the conversation during their first meet, but Courtney ensured they had a good talk. Later that day, the Poseidon actor called his mother and said he found his wife.

A year later, they moved into a house together in Los Angeles and subsequently married in Junaray 2004.

A Look into Kat Stickler's Wiki - Her Age, Net Worth, Husband, and More