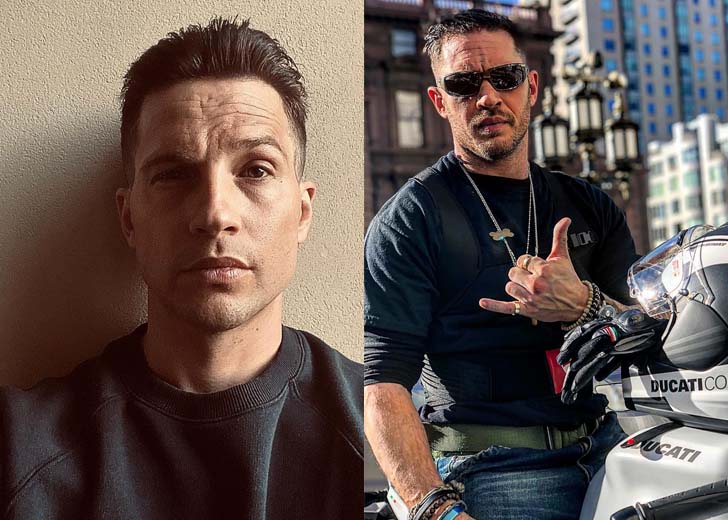 Besides his acting career, he has also gained attention as the man who looks a lot like the English actor Tom Hardy. But, how much do they look alike? Are they related? Read on to find out everything!

Over the years, many people have gotten confused between Marshall-Green and Hardy as they look a lot alike. And, if both of them have beards, it becomes pretty hard to differentiate them.

If you don’t believe it, then take a look at some of these collage pictures of the two actors taken from their respective movies or TV shows.

The first one is a collage picture of Marshall-Green – on the left – as Jackson Brice in the Marvel superhero movie Spider-Man: Homecoming (2017) and Hardy – on the right – as John Fitzgerald in the Academy Award-nominated movie The Revenant (2015).

If that’s not enough, then have a look at this one, in which neither of them has a beard. On the right is Marshall-Green as Dean Bendis in Dark Blue (2009-10), and on the right is Hardy as Tuck in This Means War (2012).

What an uncanny resemblance, right? And if you want to see more of these comparisons, then there are several scoured all over the internet.

After going through those pictures, you might also have the same question in mind as everyone else: Are the two actors related to each other?

Well, to give a straightforward answer: No, they are not related to each other in any way, despite their resemblance.

While Marshall-Green was born in America, Hardy was born in the United Kingdom. Furthermore, they have no similarities in their family.

Logan Marshall-Green Has a Twin Brother

If you were surprised after learning the similarities between Marshall-Green and Hardy, brace yourself as Marshall-Green — who will soon appear in the romantic movie Redeeming Love — also has a twin brother named Taylor Marshall-Green.

As they are twins, it’s pretty evident that Logan and Taylor will look alike. In an interview with DailyMail, Logan mentioned, “I’ve been a twin since the day I was born — and we look a lot alike.”

Since their childhood, the twin brothers had similar resemblance, either their dressing choice or the haircut. For instance, in December 2012, Taylor had shared a childhood picture of him and Logan.

In the picture, the two had a similar hair color, blonde, and their haircut was also the same – bowl cuts. Additionally, they seem to be interested in superheroes as both of them were holding action figures in their hands.

To conclude, it’s best to say that while Logan has similarities with Hardy, he and his twin brother look more alike. In the end, blood relation matters the most.

Born on November 1, 1976, Marshall-Green was raised by his parents in Cranston, Rhode Island. His father’s name is Russell Earl Green (1923-2010), and his mother’s name is Lowry Marshall.

Both of his parents were involved in theatre – they were drama teachers at Brown University. Due to his parent’s profession, he was influenced by it and eventually pursued a career in acting.

Apart from his parents, he has one biological sibling, a twin brother Taylor Marshall-Green [born on the same day as him]. Similarly, he has ten siblings from his father’s side: 7 half-siblings and three step-siblings — Logan’s biological mother is his father’s third wife.

Coming over to Logan’s nationality, as he was born and raised in the United States, he holds American nationality. Additionally, he has mixed ethnicity and is of English, Scottish, and distant German descent.