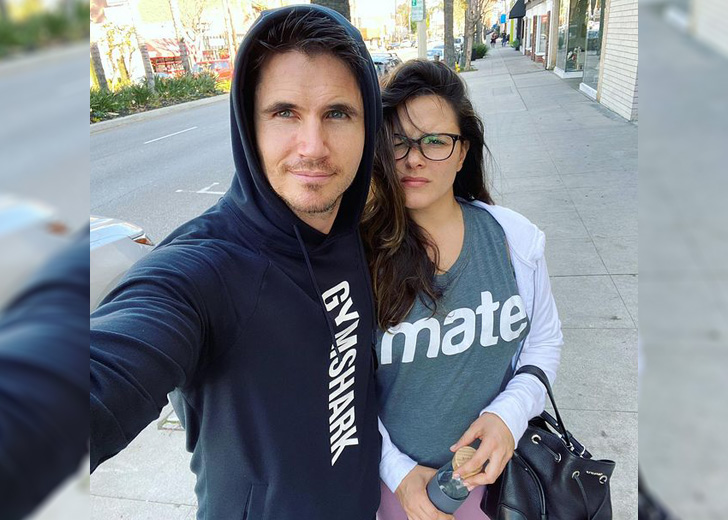 Robert Patrick Amell IV, popularly known as Robbie Amell, is a well-known Canada-born actor and producer. He has garnered the limelight through his acting performances in several movies and TV shows.

Coming to his personal life, it is just as successful as his professional life is. Amell has been married to the love of his life, Italia Ricci, for over five years.

Two years after the marriage, i.e. on April 19, 2019, Amell announced via an Instagram post that his wife, Ricci, was pregnant with their first child.

The actor shared a picture of the couple, where Ricci was flaunting her baby bump while Amell had his fun by imitating his wife with a fake baby bump. “One of us is actually pregnant,” he captioned the post.

Several months later, on a Thursday morning, September 12, 2019, Ricci gave birth to a son named Robert Amell V. Their son was weighing 9 lbs at the time of birth.

The news of the birth of their baby was exclusively revealed by ET Online. “We are definitely resting well and eating all of the things I wasn’t allowed when pregnant,” the new mother said at that time.

On the same day, Ricci shared a picture, via Twitter, of her son holding her hand. “Today we welcome Robert Amell V into the world,” she wrote as the first part of the caption.

Since then, the couple has been busy parenting their son as well as handling their respective acting careers.

Amell began dating his wife on July 19, 2008. The news of the two being together didn’t come as a shock as they often used to hang out together and make several public appearances.

Besides, they even had no problem stopping and posing for paparazzi during their outings.

After they began dating, their public appearances became more frequent. Similarly, they also used to flaunt several pictures alongside each other via their respective social media handles.

Soon, it became evident that they were made for each other and their bond has become strong. People became more invested in the couple’s relationship and began to wonder when they will take further steps.

The day finally came over 6 years after they began dating. On August 20, 2014, the actor shared a picture alongside his partner where he revealed that he got engaged to her. “She said yes!!!… I think. I can’t really be sure. I’m going marry my best friend,” he captioned the post.

In January 2016, Ricci showed her excitement for her wedding with Amell with ET Online as she said, “[It’ll be] classic and elegant — I mean, I hope. As classy and elegant as you can get when there are burgers or pizza [being served] — or maybe both.”

Nine months later, on October 15, 2016, the engaged couple walked down the aisle downtown Los Angeles. Their wedding ceremony was witnessed by close friends and family members.

During their special day, Amell donned a Vera Wang tuxedo and Ricci looked stunning in a James Clifford ball gown.

A day after her wedding, the actress shared a picture from her wedding in which she and Amell were laughing while she was holding a bouquet. Her excitement to be an Amell was clearly seen through her caption.

Though married, nothing much was changed for the two as they still had a love for each other. Their family expanded when they welcomed their first child. Thereafter, the husband and wife have been wonderfully parenting their son.

Amell and Ricci celebrated their fifth wedding anniversary on this year’s October 15th. On that day, the actor posted a picture with his wife, in which they were sharing a kiss. He also wrote a heartfelt caption.

“Watching my wife become such an incredible mother to our son made me realize I’m even luckier than I thought. And I was already the luckiest guy in the world. Happy anniversary you absolute knockout,” he had written.