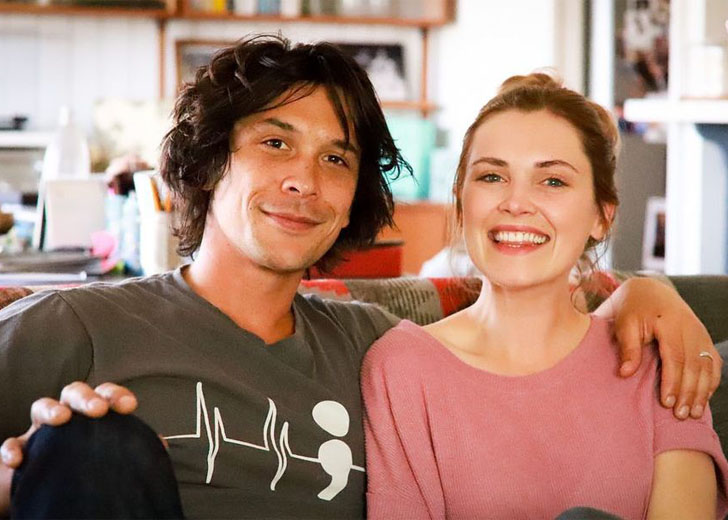 Not only is the actress known for her performances, but she has also earned quite a name for keeping secrets, the major being the secrecy over her love life.

Previously, Taylor had maintained privacy over her relationship with her fellow The 100 co-star Bob Morley. Their togetherness only came out on June 7, 2019, over a month after they shared the wedding vows — they got married on May 5, 2019.

Although there was secrecy before their marriage, the same cannot be said now as the couple usually flaunt pictures alongside each other via their social media handles.

Here is a quick scroll through the Australian actress’ Instagram handle, depicting her and Morley’s blissful marital life.

Since it was the first time, she made it memorable, writing some lovely words in the caption. First thing first, in the picture she shared, the newly married couple hugged each other. While Morley kissed on Taylor’s cheeks, the latter was seen with a smile.

In the caption, the actress appreciated her husband as she went on to state that she is very proud of her husband, his courage, vulnerability, and determination. As she went on to add more sentences, she also added, “I won the life lottery with this man!”

On November 22, 2019, Taylor went on to post a picture from her wedding ceremony, making it the second picture of herself and her husband on Instagram.

They were standing in front of the marriage officiant, and it seems the two had shared rings just moments ago. They were holding each other, possibly being ready to dance.

The heartful picture was further made special when Taylor captioned it, “Best job I ever did get,” followed by a red heart emoji.

Everyone, including Taylor, is grateful to have a cute little family. So, on the occasion of World Gratitude Day, September 21, 2020, the Aussie actress posted a couple of pictures of her little family.

The first picture saw her with her husband, in which both of them smiled and wore matching aprons. The second picture was of Morley enjoying his time with the couple’s pet dogs: Bowie Taylor and Panda Bear.

Taylor’s caption made the post even better. The caption read, “Today is world gratitude day and I wanted to share some pictures of my little family that I am so grateful to have.”

Taylor’s husband, Morley, turned 36 years old on December 20 last year. The actress showered her love for her life partner on that special day through a lovely Instagram post.

She posted two selfies of herself and her partner, where they were seen well dressed; perhaps they were celebrating Morley’s birthday and welcoming some guests.

The pictures were accompanied by some heartfelt words that Taylor had put up as the caption. The caption gave a glimpse of how their relationship journey took off and where they have reached.

She also mentioned that every day she had known Morley, her life has been better for it.

Wedding anniversaries are one of the most important days in the lives of a married couple. Marking the occasion of her second wedding anniversary with Morley, the Thumper star posted some adorable pictures via Instagram.

The very first picture of the post described their amazing marital relationship. In it, the duo could be seen locking their eyes on each other’s eyes as they shared a cute smile. The second picture was a normal one.

In the third one, the husband-wife duo hugged each other, giving their fans and well-wishers a sight to cherish.

Not only were the pictures great, but Taylor’s choice of words in the caption was also good. First off, she appreciated her husband and mentioned that he inspires her every day.

She ended the caption with a great mark of spending more and more years with Morley. “I love you. Two down, forever to go,” the closing sentences read.

Well, going by that, it can be perfectly summed up that the marital relationship of Taylor and Morley is filled with joy, happiness, and love for each other.