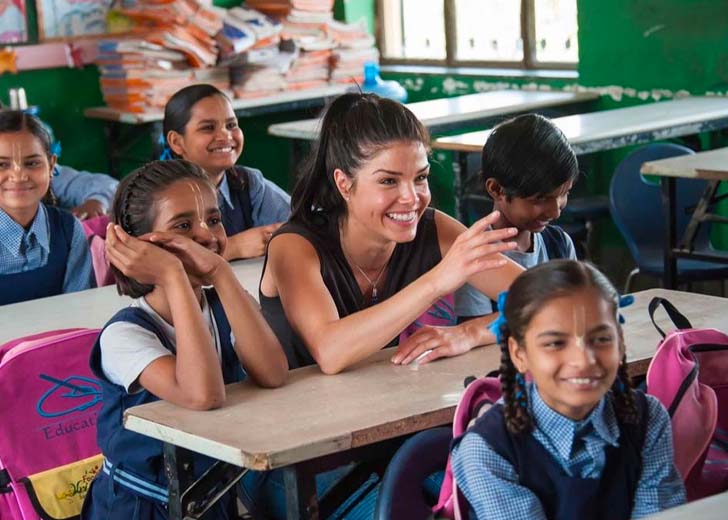 Exploring the rumors about Marie Avgeropoulos having a baby.

People are often wondering if Marie Avgeropoulos has a child. She is best known for portraying Octavia Blake on The CW’s post-apocalyptic science fiction drama The 100.

She is not married and is not dating anyone at the moment. She is currently leading a single life after breaking up with her partner after dating for two years.

However, she allegedly has a baby she does not share with any man. That is because it is reported that The 100 actress adopted a child from India in 2017/2018.

Here is everything we know about Avgeropoulous and the adoption of the baby.

Did Octavia from The 100 have a baby?

Avgeropoulous is a very kind-hearted soul. She is always helping people and is very active in the world of social work.

She has been involved with Food For Life since 2017, and on June 15, 2017, she hosted an event in Los Angeles to benefit Food For Life Vrindavan.

The same year she visited Mathura to visit Sandipan Muni, a poor children’s school run by the Food for Life organization. There, she interacted with students and teachers to learn more about their culture, education system, and way of life.

Racha was on the waitlist for a sponsor at the organization to study. Since her family did not have enough money, she was married at the age of 12.

As a result, her childhood was lost to marriage. Her mother wanted to educate Racha, and she could with the help of Food for Life.

In another post, Avgeropoulous talked about how Racha got to study with the organization’s help and was “making huge strides in her education & confidence.”

When Avgeropoulous was in India, it was rumored that she adopted one of the underprivileged kids. UttarPradesh.org reported how she adopted a child and took responsibility for their education.

They wrote, “The actress also went a step ahead and adopted one of the kids at school, taking responsibility of his education.”

Other than that, there has been no news about Avgeropoulous having a baby or adopting a child. The actress has also not spoken about it in interviews or social media.

Therefore, it is unknown if Avgeropoulous has a kid or not.

According to reports, the couple met on the 2020 film Jiu Jitsu set, in which Avgeropoulos played Myra and Moussi played Jake. They began dating while on the set on July 6, 2019.

On January 17, 2020, the actress first mentioned her partner on social media when she posted a video of him teaching her how to fight for the Jiu Jitsu film.

On her 34th birthday, June 17, she formally introduced her boyfriend to the world by posting a photo of them with the caption, “Birthday field hangouts = boyfriend shout outs @alainmoussi.”

She has mostly been seen in photos with her boyfriend since then. Moussi, like Avgeropoulos, has been sharing pictures from their vacations on Instagram.

On July 6, 2021, the couple celebrated their second dating anniversary. But as of 2022, they have broken up.

marie avgeropoulos and alain moussi being the cutest couple in the world; a thread 🤍 pic.twitter.com/oFWS9A6XDn

Avgeropoulos and her boyfriend have been tight-lipped about their breakup. However, their Instagram page suggests otherwise.

The 100 actress used to share many photos with her boyfriend on social media. But now, she has removed them all from her feed, and Moussi has done the same.

Moussi is currently showing off his new relationship with his fans and followers. He has been posting pictures with his new girlfriend, Ashley Lemery, on Instagram since August 2022.

Unfortunately, Avgeropoulos’ fans are dissatisfied with the split, and they have been spamming the comment sections of Moussi’s photos with Lemery.

They are cursing him for leaving Avgeropoulos and demanding to know why they broke up. Moussi, on the other hand, has not responded to any of them.

He has also not spoken publicly about why he and Avgeropoulos split up, nor has she.

How Much Is Eliza Taylor's Net Worth? All About Her Earnings