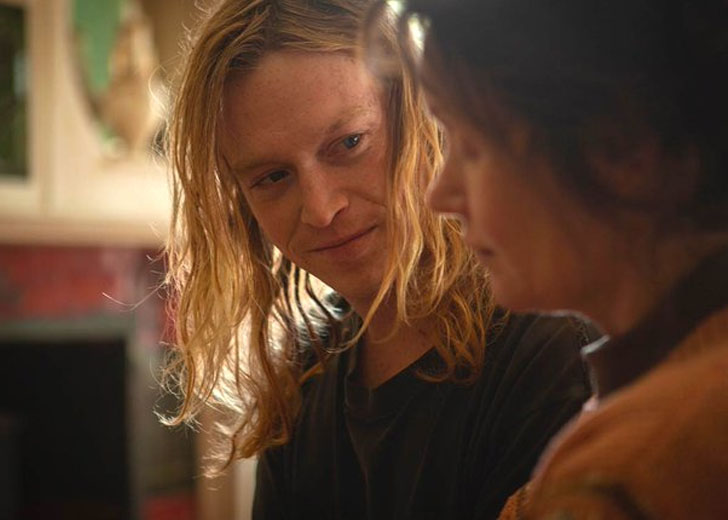 Caleb Landry Jones is an aspiring American actor and singer who has gained remarkable fame through his acting performances. He initially got fame through his recurring roles in two renowned TV shows: Friday Night Lights and Breaking Bad.

In addition, he has appeared in movies and TV shows such as The Social Network, X-Men: First Class, Get Out, Twin Peaks, Three Billboards Outside Ebbing, Missouri, The Outpost, and Finch. His movie, Nitram, is releasing in the US on March 30, 2022 – in select theatres and on AMC Plus.

Coming over to his career as a musician, he has released two albums – The Mother Stone and Gadzooks Vol. 1 – and three singles – ‘Flag Day / The Mother Stone,’ ‘All I Am in You / The Big Worm,’ and ‘I Dig Your Dog’ – to this date.

Jones’ ever-growing popularity has helped him reach different people who are always curious to know more about him. And while his professional life remains vividly clear, it’s his personal life that his fans want to know about. So;

Is Caleb Landry Jones married to a wife?

One of the reasons Jones’ fans want to know more about his personal life is that there is little to no information available about it. The actor has done a good job keeping his love life details away from everyone.

However, Glamour Buff confirms that Jones is yet to get married to a wife. And he hasn’t been in a marital relationship and settled down with a partner in the past.

We can tell so because the 32-year-old actor is presently in a romantic relationship with his girlfriend named Katya Zvereva — she is a Russia-born Los Angeles-based artist.

Vulture first reported the presence of a significant other in Jones’ life during their exclusive interview in May 2020. The outlet had reported that Zvereva had a warehouse space for use in Los Angeles, where she and Jones made the music video for the musician’s album.

In the latter part of the interview, he divulged how his partner helped him in all processes. “My girlfriend makes a lot of monotypes, and she wanted to make a monotype of me,” he said at one part.

Similarly, in another interview with Document Journal in September 2020, Jones mentioned his girlfriend again. The interviewer had asked him how his quarantine was set up. In reply, he first said:

“I’m in Texas, at my parents’ place. I’m not in a city or anything, so it’s not really a quarantine setup I guess, except that there’s food in the fridge and stuff like that. I was here already.”

After that, he stated that he was supposed to go to the film festival, but it got shut down due to the pandemic. So, he came home to say hi to my parents, and then the pandemic got more serious. But, it was perfect for him as he and his girlfriend were “here already.”

Besides these two instances, Jones has never mentioned his partner in any of his interviews or social media handles – but his girlfriend has. Zvereva occasionally mentions her boyfriend on her Instagram handle.

For instance, she once shared the cover of Jones’ debut album. Similarly, on April 5, 2020, she featured her partner for the first time on her Instagram handle.

Furthermore, on November 7, 2021, she shared a few pictures from the premiere of Jones’ movie Finch, which she had also attended. In that post, she mentioned that the outfits she and Jones wore were made by herself.

Caleb Landry Jones and his partner Katya Zvereva at the premiere of ‘Finch’ (Photo: Instagram)

Jones and Zvereva first met in 2019 on Broadway street, New York. While turning around from a weenie vendor, he saw her in a flash of a red coat. And it was that red coat that led him to talk to her as just a day before; he was wearing an identical red coat in Toronto.

He called his future girlfriend and asked her, “Is that a Russian coat?” She turned towards him with attitude and said, “No, but I’m Russian.” And that started everything as they spent the next eleven hours walking around the streets of New York until their feet and mouths gave out.

They eventually began dating, and the rest is history. Besides that, not much is known about their togetherness as both have kept the details of their relationship upto themselves only.

Caleb Landry Jones was formerly linked to his co-stars

Although Jones having a girlfriend was mentioned during a couple of his interviews, several outlets have reported that Jones’ relationship status is single. It might be because the actor wasn’t much popular back in the day.

Additionally, as those two interviews were published in 2020 only, Jones’ personal life remained unknown to many before that. There were only some rumors about his love life, and he was linked to a couple of his former co-stars.

In 2012, he was linked with Sarah Gadon after working together on a gig. However, those speculations were never addressed. Two years later, in 2014, he was rumored to be dating his Heaven Knows What co-star Arielle Holmes Harley.

The two played lovers in the movie, and their chemistry was amazing. Besides, Harley had previously mentioned that Jones made everything realistic. Thus, people wondered if they started dating off-screen as well. But that wasn’t the case.

As no presence of a lady partner in Jones’ life was found, some wondered if he was gay. But, like last time, the topic was never confirmed, and by now, the presence of a girlfriend in his life makes the gossip a hoax.