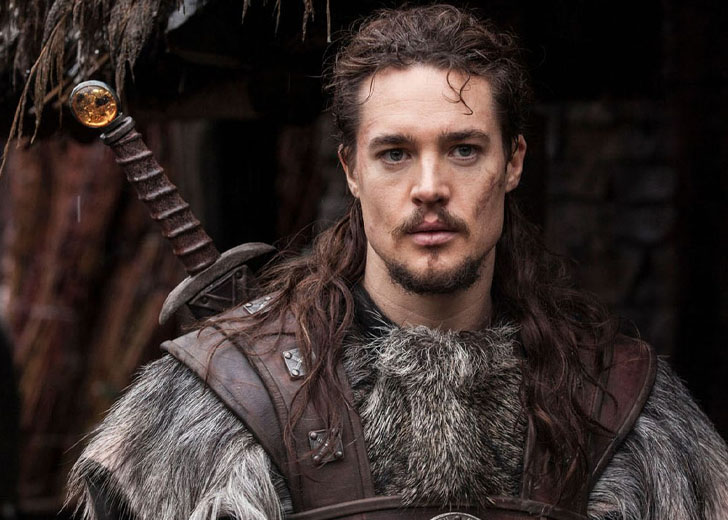 Everything about ‘The Last Kingdom’ star Alexander Dreymon’s personal life.

Alexander Dreymon is a talented German-born actor who came into the limelight for his portrayal of Uhtred of Bebbanburg in Netflix’s historical sword-slinging television show titled The Last Kingdom.

While he gained much fame through the Netflix show, he has also appeared in several other movies and TV shows such as Christopher and His Kind, Resistance, American Horror Story, Blood Ransom, Heartlock, and Horizon Line.

With his ever-growing popularity, there is always some new addition to his fan base. And those new and old fans have been eager to know one specific thing- his personal life – though they still respect his privacy.

Does Alexander Dreymon have a wife?

Dreymon’s character of Uhtred in The Last Kingdom was in love, got married, and settled down with a family multiple times during the course of the show. Some of his wife’s names are Mildrith and Gisela Hathacanutesdottir.

Alexander Dreymon as Uhtred of Bebbanburg in ‘The Last Kingdom’ (Photo: Instagram)

However, that doesn’t seem to be the case for the man playing the role. The actor is yet to share the wedding vows and settle down with a wife. So, if he doesn’t have a wife, does he have a girlfriend?

Dreymon has been very private about his romantic life affairs and rarely shares anything about it. But he does have a girlfriend. And the details of his love life with her came out recently when it was revealed that he and his girlfriend welcomed a baby boy.

According to People, Dreymon is dating actress Allison Williams, and the couple welcomed a baby boy named Arlo this past winter. The family of three was reportedly spotted on vacation with their family at a private resort in Abaco in the Bahamas.

“They seemed to be very happy and very much in love,” a source told the outlet.

Moreover, the two reportedly met while filming the 2020 thriller Horizon Line but have been together since the end of 2019.

“They are both private people individually, and they made the decision to keep this happy news to just a small circle of family and friends,” the insider added. “But they’re over the moon.”

Before dating Williams, the actor was in a relationship with a Greek actress named Tonia Sotiropoulou.

A collage picture of Alexander Dreymon and his ex-girlfriend Tonia Sotiropoulou (Photo: Creeto.com)

It’s reported that the former couple initiated their relationship in 2012 and kept everything low-key. Due to that, it remains unknown when and where they first met. As for their togetherness, it ended after two years in 2014.

The reason behind their split also remains unknown. Soon after their breakup, it was speculated in 2014 that Dreymon was dating his Blood Ransom co-star Anne Curtis. The talks started as they played on-screen lovers in the movie.

But, those rumors were never confirmed, and they got fully buried once Curtis married her boyfriend, Erwan Heussaf, in November 2017. Later, Dreymon sparked romance rumors with The Last Kingdom co-star Emily Cox. In the show, their characters knew each other since their childhood and loved each other.

The two stars were also good friends outside the show. Their chemistry on-screen and off-screen led people to wonder if they were dating in real life. But, like last time, the rumors weren’t addressed by any of them.

There were also speculations about the actor dating another of his The Last Kingdom co-stars, Eliza Butterworth. However, those gossip ended once Butterworth revealed her boyfriend named James Anton Valentine Moore.

Before all these rumors, it was also speculated that Dreymon was gay. The talks started after he amazingly played the gay character of Caspar in the 2011 TV movie Christopher and His Kind. But, given his relationship and romance rumors with ladies, it certainly doesn’t look like he is gay.

Jay Hayden's Realistic Acting in 'Station 19' Started Gay Rumors — But Is He Gay?