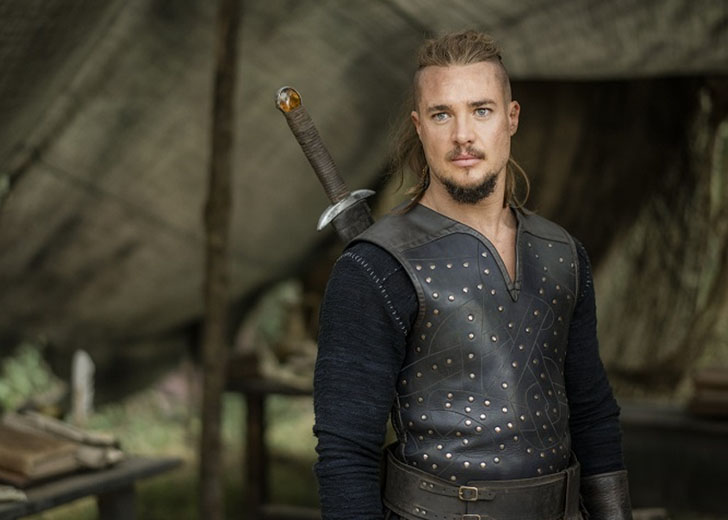 “It’s odd that I’ve grown up in so many different places,” Alexander Dreymon said of his frequent move to many places.

If you are familiar with Netflix’s The Last Kingdom, you must have heard the line “I am Uhtred, son of Uhtred.” This line is said by the character of Uhtred, the original heir of Bebbanburg, now called Bamburgh.

Uhtred is the lead character of The Last Kingdom and is played by the talented actor Alexander Dreymon. He has been a part of the show since its initial release in 2015 and has also served as the co-producer and associate producer in 20 out of 46 episodes.

Thanks to this show and his amazing performance, he has soared to fame and garnered thousands of followers. Besides the Netflix show, he has appeared in movies and TV shows such as Resistance, American Horror Story, Blood Ransom, Heartlock, and Horizon Line.

What is Alexander Dreymon’s net worth?

Dreymon’s history with The Last Kingdom is very long, with the show providing him most of the fame that he now has gained. The fifth and final season of the show recently aired on Netflix on March 9, 2022, which will be followed up by a Netflix special movie, Seven Kings Must Die.

Alexander Dreymon as Uhtred in ‘The Last Kingdom’ (Photo: Netflix)

Considering his long haul as a lead character and his other works, it must be sure that he was paid a handsome salary. Express.co.uk reported in 2020 that the actor makes well over $200,000 per year.

Similarly, it’s reported that Dreymon has an estimated net worth of $4 million. With such income and net worth, he must have a good lifestyle and invest in assets such as a house and more things – but those details are yet to be disclosed.

Alexander Dreymon is originally from Germany

Dreymon is 39 years of age as of this writing. He celebrates his birthday every year on February 7. His zodiac sign is Aquarius, and his birth name is Alexander Doetsch.

Born in 1983, he was initially raised in the suburbs of Germany. However, when a family crisis occured – his aunt in France got severely injured in a horse-riding accident – his mother decided to take him along to France, where they got settled.

Coming over to his education, after his primary education, he learned acting for three years in Paris. The multi-lingual actor then spent another three years at the Drama Centre in London.

The trained mixed martial artist was born in Germany to his father, Wilson Dreymon, and mother, Loran Doetsch. While his mother is a teacher by profession, he has said that his father worked as a doctor.

When Dreymon was a child, his parents’ marriage failed, and they divorced. It was before he and his mother moved to France to take care of their injured aunt.

In an interview with The Bulletin in 2015, he talked about his relationship with his biological father and related it to his character in The Last Kingdom. He said, “Even though I have a great relationship with my dad, he wasn’t always there.”

“And I’m always looking for people who I could take example from. And I think that’s a great parallel with Uhtred as well as the moving-around thing because the premise demands that his allegiance is either with the Danes or with the Saxons.”

Sometime after they moved to France, his mother fell in love with a Swiss businessman. They eventually got married, due to which Dreymon also moved to Switzerland. But, the new family of three didn’t spend much time in Switzerland, as they moved to the United States for his step-father’s job.

They initially lived in Texas, then in San Francisco, and then moved to South Dakota, where Dreymon learned to ride horses. After some time, the family again relocated to Bali and then to New Caledonia, Brazil.

Despite all the movements, the actor feels fortunate to travel worldwide, see different places, and make friends. He told The Bulletin, “I always had friends all over the world and family. I was really fortunate to be able to see these places and still feel at home because it was with my folks.”

As of now, Dreymon has a well-settled thing going on in the entertainment industry. It’s reported that he lives in Los Angeles, California.

Alexander Dreymon has a tall height

Dreymon’s Uhtred in The Last Kingdom stood above all in the numerous battles he fought. And the actor also stands tall in real life, in terms of height, of course. His IMDb profile suggests that he is 5 feet 10 inches (1.78 meters) tall.

The Guys Reading Poems actor is presently available only on one social media platform — Instagram.

Dreymon remains quite active on Instagram, where he occasionally updates his 1.1 million followers about his day-to-day life. But, he mostly shares behind-the-scenes photos, clips, and more related to The Last Kingdom.

The Golden Rules for First-Time Investors

'The 100' Stars Eliza Taylor and Bob Morley Are Parents, Welcomes First Child Together