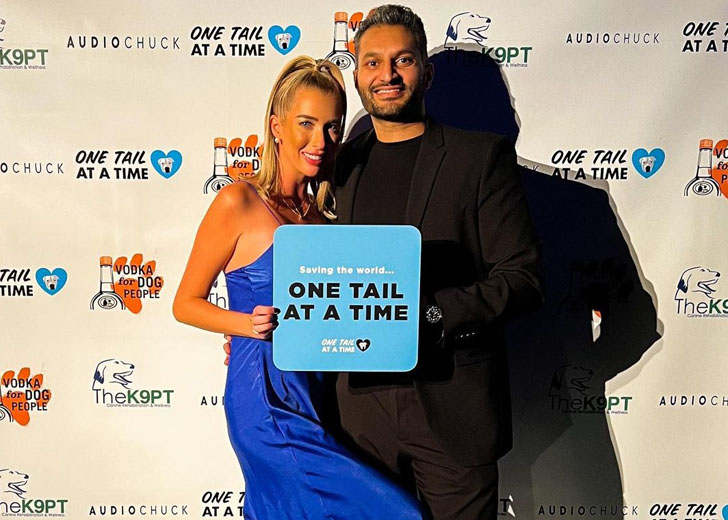 33-year-old contestant of a popular Netflix series, Love is Blind, Abhishek Chatterjee has always been in the limelight because of his relationships.

After splitting from his ex-fiancee Deepti Vempati, the reality TV star has officially introduced his new girlfriend, Emily, to the media on March 17, 2022.

On Thursday, the Love Is Blind star, popularly known as Shake, shared several photographs with his new girlfriend, Emily, via Instagram. In one of the photos, she could even be seen kissing Shake on the cheek.

While making his relationship official, he expressed that he had never been this happier in life. The reality star implied that he had realized it was important to focus on yourself, prioritize yourself, and love yourself.

Moreover, Shake disabled the comments area in his post to avoid any drama among Love Is Blind followers. He did, however, tag Emily on her Instagram account, @emw13.

If you have been following Shake on Instagram, he had already hinted at their new relationship in prior posts. But the recent set of photographs and the caption made everything more clear.

Emily also shared pictures of them on her Instagram account the next day. “Love is blurry,” she captioned.

It’s an age-old story. Strangers enter a dating contest, fall madly in love on national television, get engaged, break up, then shade each other on social media.

Such is the situation with Shake from Love is Blind show.

Shake and his TV partner, Vempati, were recently engaged in controversy after calling off their engagement due to his statements against Vempati during and after Season 2 of the reality program.

Just to let you know, Vempati is now dating co-star, Kyle Abrams, while Shake made his new relationship with girlfriend Emily Instagram public on March 17.

Shake was continually on the fence about his love with the reality TV star, prompting her to break up with him on their wedding day, even though the two got engaged on the show.

“I deserve somebody who knows for sure,” she informed him as she called off the wedding.

Throughout the season, Shake made behind Vempati’s back comments about her physical looks, informing his family and castmates that he wasn’t sexually attracted to her.

Instead, he compared being with Vempati to being with his “aunt,” making him the season’s most memorable villain.

Since the broadcast aired, many fans have condemned his comments on Vempati’s appearance. Her family got involved, with her brother Sunny labeling Shake a “loser” in an Instagram statement on Feb. 27.

Since then, Shake has been fluttering between apologetic on social media and exhibiting no signs of maturity.

He released a video on March 1 in which he stated that he was not sorry for what he did on the show.

“I’m not sorry,” he remarked in the video. “I believe I handled the incident as well as anyone could in my situation. And, at the end of the day, I’m going to continue to live my best life. You don’t have to like me either. Thankfully, I only have to like myself.”

Shake later apologized to Love is Blind cast in an Instagram video posted on March 8 and said he was sorry.

“Deepti, I am sincerely sorry for some of the things I said that could’ve been left unsaid,” he continued, referring to her as a “lady that I know I harmed.”

Vempati responded to Shake’s apologies by telling the Daily Mail on March 11 that it was “fake” and “too late.”

Shake appeared to shade Texas native again a week later in an Instagram post introducing his new relationship. “Good things happen to those who wait, don’t settle,” Shake wrote with photographs and clips of himself and his new partner, Emily Wilson.