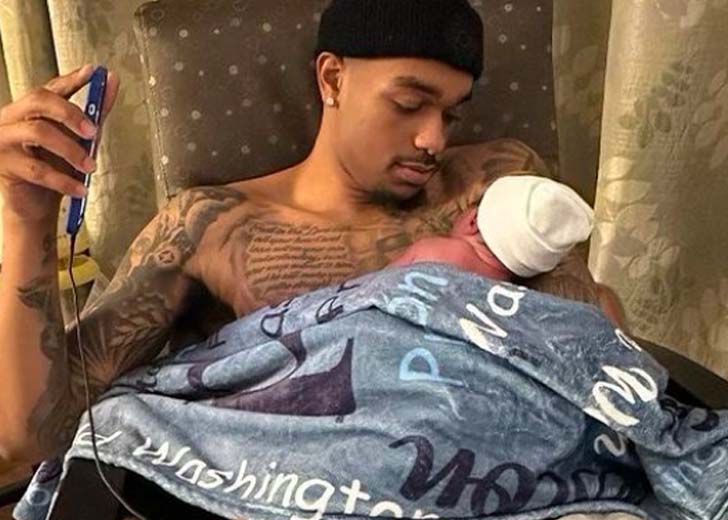 Hearty congratulations are in order for NBA player PJ Washington and his fiancée Alisah Chanel on the birth of their son.

On December 17, 2022, Washington and Chanel announced the birth of their son via their Instagram accounts.

Similarly, Chanel shared pictures of herself with her fiancée and their son, along with their baby’s name. She wrote “Preston Julian Washington” alongside a blue heart and a baby emoji.

On December 8, 2022, Washington surprised Chanel with a brand-new car as a pregnancy gift as she was about to give the greatest gift of his life. Exactly a month before, the couple hosted a baby shower with their close family and friends.

Channel’s pregnancy was made public on July 31, 2022, when she posted a baby bump picture on her Instagram.

She shared a gorgeous photo of herself wearing a stunning gown that revealed her growing tummy, with the message, “God’s greatest gift. This is chapter 25.”

However, since they both already have sons from prior relationships, Washington and Chanel’s experience as parents is not entirely new.

Washington also has a baby boy born in May 2021 from his previous relationship with Brittany Renner.

Similarly, Chanel has a son named Aiden Joseph Licastro, who turned five on February 16, 2022. However, the details regarding her son’s biological father have yet to be made public.

Washington and Chanel began dating in September 2021, not long after he broke up with Renner, the mother of his baby and Alisah’s former friend.

When they first started dating, there was a lot of criticism regarding Washington and Renner’s age gap—she was 28, and he was 22. After giving birth to a child in May 2021, the pair split up in July 2021.

On August 24, 2022, when the pair celebrated Washington’s 24th birthday, Channel revealed that she had only met him a year ago. However, she felt like they have known each other their whole life.

Chanel shared the news of her getting engaged to Washington via Instagram. On August 31, 2022, Chanel flaunted her enormous diamond engagement ring, announcing that she would soon marry the NBA player.

She shared a short clip of her hand showing the engagement ring with Jagged Edge’s track ‘Let’s Get Married,’ playing in the background.

She captioned the video saying, “So this happened this morning. Issa fiancée. WOW babe you did that. I LOVE YOU.”

Numerous well-known people, like Mulan Hernandez, Chania Ray, Marissa Da’Nae, and even Washington’s ex-girlfriend, expressed their congratulations on their engagement.

Renner, who goes by the username @bundleofbrittany, commented on the post, saying, “Congrats y’all.”

The pair hasn’t yet disclosed their wedding day or the location of their vow-exchange ceremony.

PewDiePie and Wife Marzia Mourn the Death of Their Pug Maya