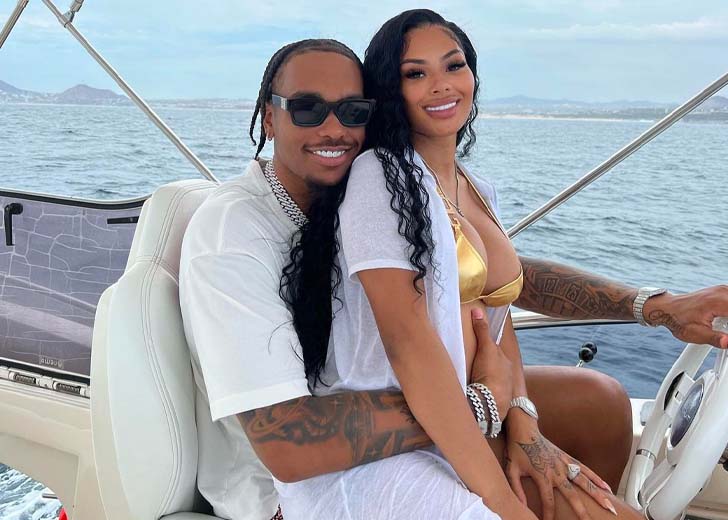 Alisah Chanel showed off her gigantic diamond ring on August 31, 2022, revealing that she is now soon to be the wife of NBA player PJ Washington.

Two new surprises in a row as last month the model Chanel revealed that she and her now-fiancee are expecting their first child together.

However, it is not a brand new experience for both Chanel and Washington as a parent, as both of them already have a son from their previous relationships.

Chanel has a baby boy named Aiden Joseph Licastro, who turned five on February 16, 2022. Similarly, Washington also has a baby boy from his previous relationship with Brittany Renner.

After the revelation of Channel’s pregnancy on July 31, it seems like the pair wanted to take their relationship to the next level.

She shared a beautiful picture of herself in an incredible gown showing her belly bump and captioned the photo, “God’s greatest gift. This is chapter 25.”

Exactly after a month, Chanel shared the news of her getting engaged to Washington via Instagram. She shared a short clip of her hand showing the rings with Jagged Edge’s track ‘Let’s Get Married,’ playing in the background.

She captioned the video saying, “So this happened this morning Wow babe you did that. I love you.”

Last week while celebrating Washington’s 24th birthday on August 24, Channel disclosed that she only met him a year ago. However, she felt like they have known each other their whole life.

Many renowned personalities congratulated them on their engagement, including Mulan Hernandez, Chania Ray, Marissa Da’Nae, and even Washington’s ex-girlfriend.

However, the couple is yet to announce their marriage date and where they will exchange their wedding vows.

Before Chanel, Washington was in a romantic relationship with Renner. Together, they have a son, who was born around May 2021.

However, just weeks after welcoming their child, the pair broke up. People had previously criticized Renner for her former relationship with Washington and even claimed that she had lured him to pay her $200k in child support.

According to HollywoodMask, fans even alleged Renner was stalking the NBA player before starting their relationship.

However, in a recent interview with The Shade Room, she cleared out that she gets only twenty-five hundred dollars monthly for child support.

After Renner found out that her ex-boyfriend got engaged to Channel, Renner went over to Channel’s post to congratulate them on their engagement.

Renner, who goes by the username @bundleofbrittany, commented on the post, saying, “Congrats y’all.” As soon as they saw her comment, the fans replied to her quite rudely.

One of the fans wrote, “@bundleofbrittany punching the air rn,” while another fan replied, “What audacity you have finished swindling him and you come to congratulate him for being stupid.”

“@bundleofbrittany should’ve been you.. but didn’t know how to treat the boy,” said one of the followers of Washington.