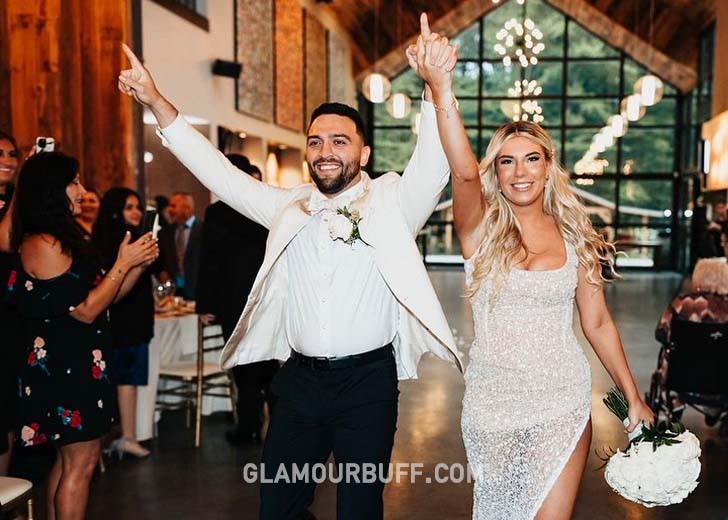 While the groom announced their wedding week to their fans with an Instagram post captioned, “Wedding weekend is finally here.”

“I cannot put into words how excited I am for our big day. The amount of effort and support that has gone into this journey, along with things that have happened (Axton being born prematurely with 27 days in the NICU), cannot be measured. Thank you, @sapphirecreekwinery, for hosting our special day, and thank you to everyone along this journey that made this day possible.”

The bride followed up on her husband and revealed their marriage on Instagram by posting wedding photos and captioning, “Officially The Cuevas family.”

Love is blind fans are excited to see this beautiful couple together. Read along to find out more about their wedding details and relationship.

Cuevas, 28, and his now wife, Rainey, announced their engagement in November 2020 to PEOPLE.

The couple was expecting their first child when Cuevas surprised Rainey with a gender reveal-turned-proposal outside the Rock and Roll Hall of Fame in Cleveland.

“I set up with the Rock & Roll Hall of Fame to light up their building the color of the gender, disguising the proposal as a gender reveal!” the reality star told PEOPLE.

“Aubrey was very surprised because she thought we were going to the venue, but I blindfolded her so she wouldn’t know where we were actually going,” he continued, revealing that he had done a month’s worth of planning, making sure Rainey didn’t find out.

The couple married two years after they were engaged and had two sons, Ace, 16 months, and Axton, 6 months.

Mark Cuevas and Aubrey Rainey with their sons (source: Instagram)

Their sons served as ring bearers at the wedding, dressed in matching suits like their fathers. They even danced with the couple during their first dance.

Mark Cuevas was left on the alter by his ex

Cuevas first appeared in the first season of Love Is Blind, which aired in late 2018.

After a few days of communicating through a wall, he proposed to fellow contestant Jessica Batten on the show.

However, their relationship did not end well when Batten abandoned the reality star at the altar on their wedding day, leaving him heartbroken. She said that their 10-year of age gap was her reason behind such a decision.

After the end of Love Is Blind, contestant Lauren “LC” Chamblin accused him of cheating on her with Rainey. The Netflix star, however, denied the allegations.

In the summer of 2020, the Love is Blind alum met Rainey. The couple told People about their meeting, saying, “We met at a restaurant in Atlanta, kept in contact, and started visiting each other frequently.”

“We took a Fourth of July trip to Savannah, Georgia, where we officially started dating and then never left each other’s side since.”