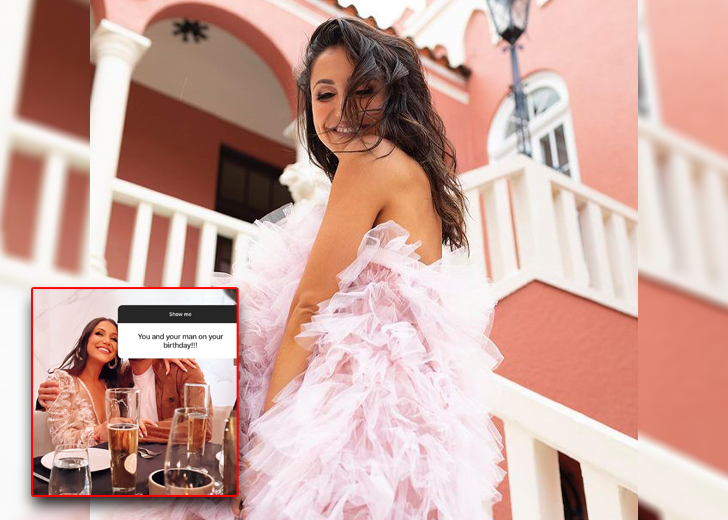 And Stickler clearly had quite a celebration during her 27th birthday celebration. She gave glimpses from her special day to her fans sharing some snaps on her social media.

After her birthday party wrapped up, the SNL aspirant took to her Instagram handle to share some pictures and clips. She shared several Instagram stories as well as a total of two Instagram posts, containing multiple pictures.

The Instagram stories were mostly shared by her friends and family members who had attended her birthday celebration and Stickler had reshared them. In those stories, her birthday cake cutting program, family and friends’ dinner, as well as other party celebration moments were seen.

Coming over to the pictures she shared, in one of the two Instagram posts, she was seen alongside her daughter, MK, her brother, Chris, her best friend plus the sister of her alleged boyfriend, Taylor Winter, and others.

In all of those pictures, the birthday girl looked stunning as she donned a white “For Love & Lemons Temecula Jumpsuit.” Going by where the pictures were taken, it seems they had small close friends and family-only birthday dinner celebrations out in a restaurant.

Similarly, another birthday post that Stickler shared was a photoshoot. She shared two pictures in which she was seen donning a pink-colored gown. The TikTok star used a purse emoji to caption the post.

While several of Stickler’s fans wished her on her birthday, some fans noticed something unusual with the photoshoot post. The thing to be noticed was that the photoshoot pictures were taken by an Elopement Wedding Photographer named Brittany Borders.

One of her fans noticed this and commented, “Ok. but the tagged photographer’s bio is ‘elopement photographer’ does this mean something?”

The comment from this fan comes amid the speculations around Stickler’s dating life as it is believed that she has a new boyfriend, Cam Winter. The Miami, Florida native has been slowly revealing her new boyfriend through TikTok videos.

Some days later, Stickler even revealed through her Instagram story that her boyfriend had attended her birthday, as she revealed their picture after a fan requested her to share the couple’s picture from the birthday celebration.

But she is still keeping the relationship private. That is because, she didn’t fully reveal the face of her new man in the picture.

That said, pictures from the wedding photographer and the inclusion of her new boyfriend at her birthday celebration definitely hint that something big is coming up very soon. Maybe, a wedding announcement – who knows!