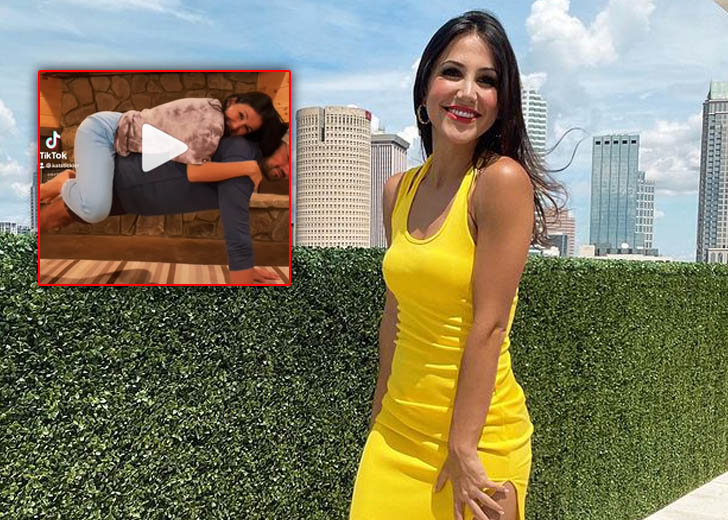 Kat Stickler, who rose to fame with her TikTok videos, has allured her fans into her dating life ever since she was in a relationship with ex-husband Mike Stickler, with whom she shares a daughter named MK.

The excitement among the fans regarding her love life remains the same, despite her split with Mike, as she is now allegedly in a romantic relationship with a man named Cam Winter.

Kat first teased her alleged boyfriend on September 16, 2021, when she posted a TikTok video to wish him on his birthday, writing, “Happy Birthday.” In the same video, she was also seen kissing Cam inside a moving car.

While the identity of her partner is yet to be officially confirmed by the TikTok star herself, her fans have already done the digging and found out the man.

Ever since the above-mentioned birthday post, Kat has been slowly revealing her beau via TikTok videos, which she also shares on her Instagram handle.

In one Instagram post of September 25, she posted a TikTok video of her sleeping in her bed and suddenly waking up and screaming. The video had a background text that read, “When you forgot he spent the night.” Additionally, the caption was “What’s in my hair.”

Similarly, in another Instagram post of October 10, Kat posted another TikTok video, where she was spotted riding on the back of a man, believed to be Cam, while he was doing push-ups.

Only the body and a small portion of the chin of the man was seen in the video. TWINNEM by Coi Leray was used as a background song.

“A little more to the right please,” a fan commented.

Most recently, on October 20, she posted a Tiktok video via Instagram. In the first part of the video, she was seen blushing all over as the background text read “POV: you’re dating a guy who respects you, adores you & is proud of you…”

As the blushing part ended, several screenshots of text messages appear, which seemed to be sent to her by her new boyfriend. Some of the messages read, “Good morning beautiful!,” “I’d be more than happy to pick up,” “How’s MK doing today?,” “Wanted to say how proud I am of you,” and more.

Someone commented, “I saw you guys at the movies & you two were adorable! Good for you girl!” revealing the couple was recently out for a movie date.

Going by all of those, it seems like Kat’s smooth revelation is working out. She has been doing this for a while now and it might not take much time for her to fully introduce her new boyfriend to the world.

As mentioned earlier, Kat’s alleged new boyfriend is Cam Winter. He hails from the suburbs of Tampa, Florida and he is an engineer by profession.

As per Cam’s Instagram bio, he currently works at a construction company named Barr & Barr, located in Tampa, Florida. His bio also indicates that he is associated with Big Storm Fishing in Florida as well as Texas.

When dug further, it was found out his father’s name is Lee Winter and his mother’s name is Misty Winter. Cam’s sister, Taylor Winter, is the common link between him and Kat.

Taylor and Sticker are best friends and can be seen making multiple appearances on each other’s Instagram handles.

As for Sticker’s appearance in Cam’s Instagram handle, nothing can be said about that as his Instagram profile is private. Other than these, there are currently no further details available on Kat’s new partner.