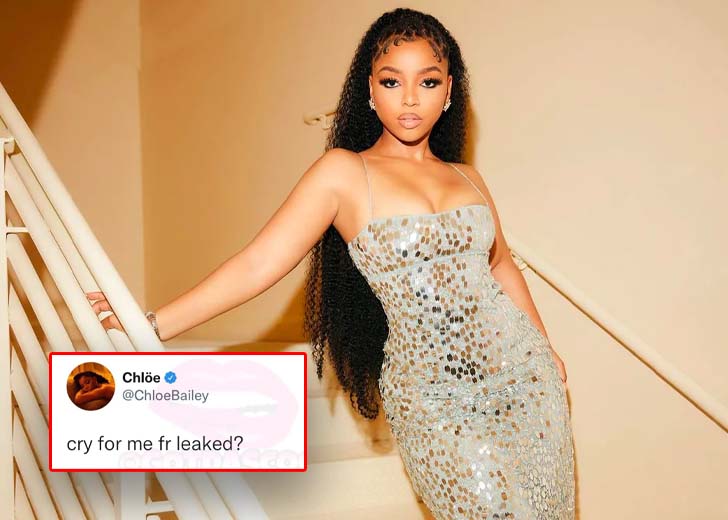 Chloe Bailey’s new unreleased song ‘Cry for Me’ feat 6lack has been leaked on the internet.

And when the American singer-songwriter found out about this leak, she immediately took to her Twitter handle to express her thoughts in a since-deleted tweet.

“Cry for me fr leaked?” she wrote. But as mentioned earlier, the tweet was taken down moments after being posted. Nonetheless, some quick notification tappers were able to take a screenshot of the tweet and repost it on the platform.

In addition, they wrote that the song is “so fireee” and asked people to stop leaking Bailey’s music.

Similarly, people who heard the leaked song took to their respective Twitter handles to express their reactions. One wrote, “Cry For Me is a serve. Chloe’s solo career is about to take TF off; watch!”

“I kid not when I say that I have listened to cry for me over fifty times since finding out it leaked. Chloe baby, I swear I will buy the album 6 times when it comes just let me have this,” another user tweeted.

“cry for me is literally better than anything Chloe has officially released,” one user added, whereas a Twitterati wrote, “Why Chloe still holding onto cry for me- DROP IT ALREADY!!!!”

On the other hand, many people on Twitter claimed that the leak came from none other than Bailey herself. However, as there are no proofs to confirm it, these claims should just be taken with a grain of salt.

And while Bailey did delete her tweet, she later posted another tweet. On August 1, 2022, she posted a behind the scene picture from her music video of ‘Cry For Me,’ in which she and 6lack were standing inside a heart-shaped fire.

“The video was fire too… literally,” she captioned her tweet along with fire and laughing emoji. Under her tweet, many users jumped in and asked the singer to release the song officially.

A new snippet posted by Chloe Bailey from her unreleased song ‘Cry For Me’ (Photo: Twitter)

Bailey started her musical career as the one half of the duo Chloe x Halle, the other half being her sister Halle Bailey. In 2021, the sisters decided to put a momentary pause on their career as a duo and focus on more solo projects.

In August 2021, Chloe released her debut solo single titled ‘Have Mercy’ from her upcoming debut solo studio album. At the end of the year, she teased her forthcoming collaboration with 6lack by posting a snippet on her social media handles.

The small teaser was immediately loved by thousands, and many believed it would be an instant hit upon its release. But, the project – later titled ‘Cry For Me’ – is yet to be officially released, and now, it has been leaked.

Posted on August 15, 2022August 15, 2022
"I should clearly state that these accusations were proven to be false," said SVB on his video.
Read More