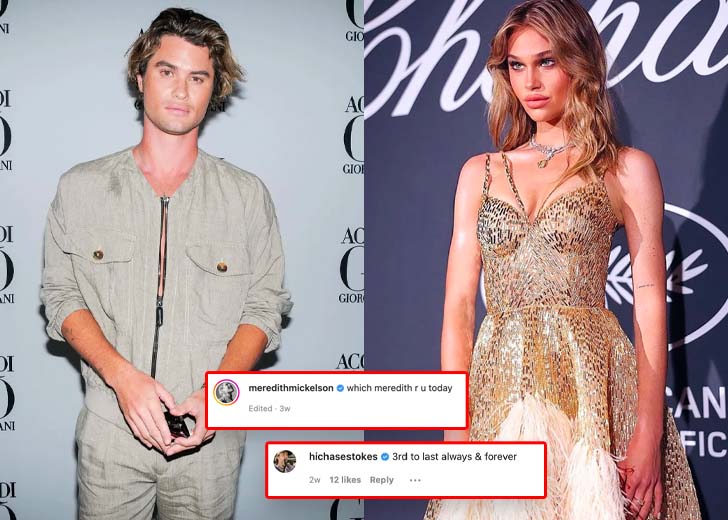 The chemistry between actor Chase Stokes and model Meredith Mickelson has become a hot discussion among fans.

The Outer Banks actor is rumored to be dating model and social media star Mickelson. Fans even asked Deuxmoi whether the two are dating or not after Stokes was seen being flirty on Mickelson’s comment section on Instagram.

In response, Deuxmoi, in their Instagram story, added a screenshot saying, “Any tea on Chase and Meredith? Chase not missing a single ig post of Meredith’s to comment something flirty on.”

In a picture uploaded by Meredith on July 3, she was posing holding a book and a cup. There, Stokes commented, “What’s in the Cup.” Then again, on July 16, the model uploaded a series of pictures where the actor commented, “What is on the raspberries….”

Furthermore, the model uploaded photos saying, “which Meredith r u today” to which Stokes’ reply was “3rd to last always and forever.”

Prior to Mickelson, Stokes was also rumored to be dating model Izzy Metz. He was seen getting really flirty with Metz in New York City, as per Us Weekly.

“They attended a party at The Box together and were seen arriving and leaving together. Afterwards, Metz and Stokes went to Marquee and left there together as well,” a source told Us Weekly.

Even though the party was full of famous and renowned personalities, Metz and Stokes had eyes for each other only. An insider disclosed, “They were really flirty and hugging and holding hands. They were snuggling and canoodling in the car and were definitely trying to be low-key.”

Nonetheless, model Metz soon responded to the dating rumors with Stokes. “Goes out one night to get over a boy who treated me wrong,” she wrote in a TikTok video, followed by “Gets revenge on accident.”

Then, her video showed multiple headlines about her and Stokes’ recent outing in New York City. The clip puzzled many users, and they wanted more clarity on the matter.

“Was it a one time thing girl?” commented one of the fans, while another wanted clarification saying, “Um spill the tea??”

Before Metz and Mickelson, Stokes was rumored to be dating Steve Jobs’ daughter, Eve Jobs, as per HollywoodMask.

Deuxmoi replied on her Instagram story saying, “I had a couple people DM me this but I have yet to see photographic evidence” to the statement, “Chase Stokes is dating Steve Jobs’ daughter Eve Jobs. They are on vacation together now.”

Deuxmoi’s reply to the anonymous’ answer to the question(Source: Instagram)

Likewise, Stokes was previously involved romantically with Madelyn Cline, who works alongside Stokes in Netflix’s mystery teen drama series titled Outer Banks. The pair officially confirmed their romance in June 2020 but called it quit in November 2021.

Posted on February 2, 2022February 2, 2022
Tayler Holder has been unfollowed by many, especially his friends, on Instagram. But why? Although nothing has been confirmed as to what’s the main...
Read More