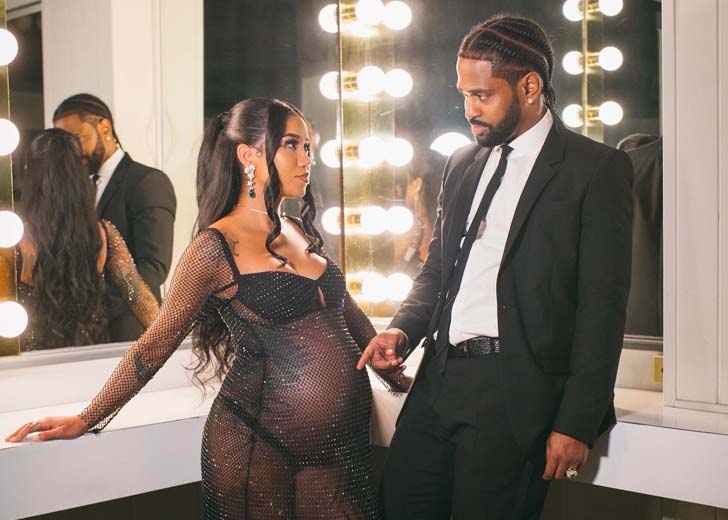 The couple interrupted in the middle of a duet and yelled out the gender of their unborn child while asking the audience to cheer.

Famous couple Big Sean and Jhene Aiko, who have been seeing each other intermittently since 2016, announced they are expecting a son during their performance on Thursday, October 13, at the Greek Theatre in Los Angeles.

As seen in the video posted to Twitter below, Sean made the announcement in the middle of one of their duets while pausing to stroke Aiko’s belly and asked the audience to “make some noise” for their “baby boy.”

When the couple stepped out in Beverly Hills at the beginning of July, Aiko, who is also the mother of a 13-year-old daughter named Namiko Love with musician O’Ryan, was clearly showing signs of pregnancy.

In mid-July, soon after candid pictures of Aiko showing a baby bump emerged, the pair announced they were having their first child together by posting their first maternity photos on Instagram. Aiko posed nude while cradling her pregnancy and sporting gold streaks all over her body, and Sean stood shirtless next to her.

Since the release of their collaborative album Twenty88 in April 2016, the two have been dating. They first connected at No I.D.’s studio in 2012.

They went on what Aiko later described as a “date” at a Los Angeles Lakers game around that time, despite the fact that she was dating someone else at the time. In an interview with Flaunt Magazine from 2016, Sean reflected on his choice and said, “I didn’t care.”

Their first public kiss occurred in June 2016 at Power 105.1’s Powerhouse event. They attended another public excursion at another Lakers game in December of that same year after Aiko filed for divorce from Dot Da Genius.

The pair were reported to break up in March 2019 but resumed working together as Sean wished Aiko a happy birthday on Instagram in March 2020.

The American rapper wrote, “Always proud but never surprised cause I know how great you are at everything you do.”

By New Year’s Eve, they were again teasing a romance as they posted a selfie together. Then, in March 2020, Jhene released her album, Chilombo, and the rapper sent her heartfelt public congrats. He wrote, “Congrats my baby you earned this one.”

Sean and Aiko teased an engagement over an online video chat session that was full of flirtation and compliments back in April 2020, sending their followers into a frenzy.

“You look good,” Big Sean told Aiko, and she said, “Oh yeah? Why don’t you marry me? The comments section erupted after Sean replied, “It’s in the work. Don’t even trip.”

Sean made sure to call her girlfriend a “Beautiful Mom” in the comments section of an Instagram photo last month. Recently, he even brought his child’s soon-to-be-mother to Detroit to give her a tour of his early years.

They made stops at his old home, high school, and grandma’s house and showed Aiko his first kid, their “family roots.”

On October 16, 2022, the rapper and his singer-partner shared pictures of their baby shower celebration. Their close friends and families attended their shower and blessed them and their unborn baby.

Blessings’ singer dressed in Burberry shirts and white bottoms, and her partner looked like a fairy in a white floor-length tulle gown.

Features of Gambling in Australia