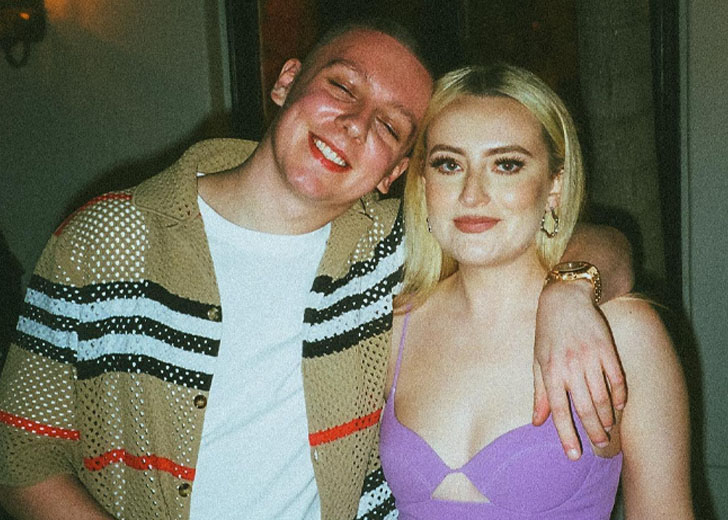 Everything you need to know about Aitch and Amelia Dimoldenberg’s relationship.

The British rapper confirmed his togetherness with the Chicken Shop Date creator on Friday, March 11, 2022, after teasing it for weeks.

Aitch — real name Harrison Armstrong — had taken to his Instagram handle to share some pictures alongside his beau, probably for the first time.

In the three pictures he shared, the first two were with Dimoldenberg, whereas the last one was of him standing alone while holding a bouquet of red and white roses on the right hand and showing a middle finger on the left hand.

Likewise, in the first picture with Dimoldenberg, the newly-confirmed couple were standing still with Aitch’s hands over her shoulders and smiles on their faces — he was holding a diamond necklace in his one hand.

In the second one, he could be seen putting the said-diamond necklace on his girlfriend’s neck.

Aitch putting on a diamond necklace on his girlfriend, Amelia Dimoldenberg (Photo: Instagram)

A little over an hour before Aitch confirmed his togetherness with his comedian girlfriend, Dimoldenberg had also taken to her Instagram handle to confirm her relationship with Aitch.

She had shared a short clip – a fun one – in which she was in front of Aitch’s doorsteps and said, “Do you miss me?” In the end, she says, “Come one, Hurry up, let’s go,” and hands the above-mentioned bouquet of red and white roses to him.

Captioning her post, she wrote, “So who’s coming to the wedding?” After that, she officially confirmed her relationship by writing, “❤ [love] u @aitch.”

Before confirming their relationship, the couple had teased their romance quite a lot via TikTok and Instagram.

Aitch first teased about it on TikTok when he went on his first date with Dimoldenberg. Though he had kept her identity a secret, he revealed that he was nervous and asked his followers if he should ask for a second date.

The couple then went for a second as well as a third date. On one of their last two dates, the couple went bowling. As per DailyMail, Aitch had even shared a compilation video from their bowling date in which they looked “extremely close and cute.”

Following that, they had teased even more about their love. Additionally, the couple was caught by paparazzi in Los Angeles, where “they couldn’t keep their hands off each other.”

Aitch and his girlfriend Amelia Dimoldenberg on their bowling date (Photo: Instagram)

And now that they have confirmed their togetherness, their fans can finally rest. But can they? It’s because Aitch has started another talk just after putting the one about his relationship with Dimoldenberg to rest. And that is:

Are Aitch and Amelia Dimoldenberg engaged?

The engagement in question was raised by the rapper himself while confirming his relationship with Dimoldenberg.

Going more deeply, Aitch had captioned his post by writing “Amelia Armstrong,” followed by a ring emoji and a heart eyes emoji. And as we all know, Aitch is the rapper’s stage name is his real name is Harrison Armstrong.

When he put up that post, his partner had also commented, “Steady on with that caption Harrison 😅😅 ❤️❤️.”

Thus, putting his real last name with his girlfriend’s first name and the ring emoji on the caption has led fans to speculate if they are engaged.

So, are they engaged? Well, that question remains unanswered for now as neither of them has announced anything on their engagement. So, fans of the couple might have to wait a little longer to hear that news — if they are engaged.

How Adult Learners Can Boost Their Cognitive Function