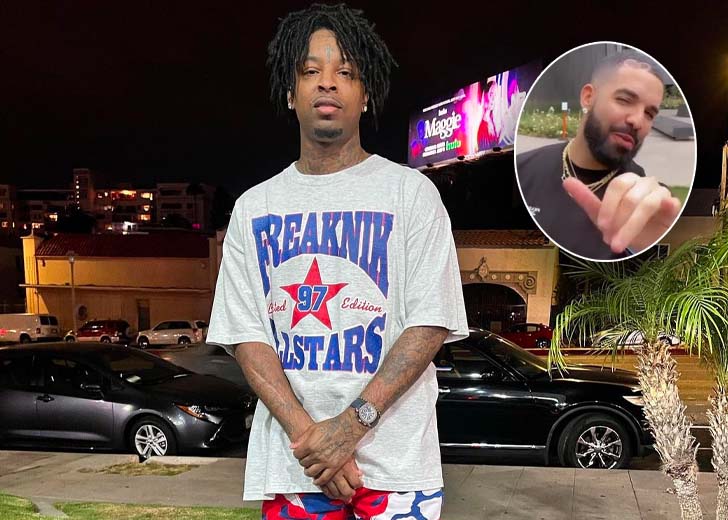 21 Savage tries to hold his laughter at TikTok videos.

Drake has been the roast center since he released his new album Her Loss. Fans have been trolling him for making “flirtatious” remarks on 21 Savage in his song lyrics of Rich Flex.

The singer recently released his new collaborative album, Her Loss, and fans have noticed his unintentional flirt with 21 Savage. Moreover, they are making funny TikToks to roast him on the song lyrics in the BBL context.

In addition, 21 Savage has responded to some of the TikTok videos. He collaborated with Kai Cenat and made a reaction video to some particularly sensual videos.

The fans have been berserk about the song lyrics, but 21 Savage seems unamused with their reaction. In a video, a TikToker makes fun of Drake by making a sensual dance move regarding 21 Savage.

His reaction to the video was, “Oh Hell no,” as he thought the person in the video was a girl. However, it was a boy making funny dance moves. He added, “I thought that was a girl, bro. On God, I did. He look like a girl.”

In the comments, fans were stunned by this hilarious response. One of the fans said 21 Savage was trying hard not to laugh, making the reaction video even funnier.

Drake rapped these lyrics, which took fans aback as they thought he showed his BBL intuitions throughout the chorus. One of the fans reportedly commented, “He was feeling sassy on this track … definitely in his bbl era,”

The album Her Loss was released on November 4th, and Rich Flex was the first song. The song starts with Drake rapping the chorus calling out 21 Savage. It began with the first chorus; now, Drake and 21 Savage are being trolled for it.

One of the TikTokers also made an animated version of Drake’s BBL to 21 Savage. The video received over 11 million views and is increasing by the day.

Furthermore, Drake seems to have dissed Megan Stallion in one of his songs. On the other hand, he allegedly called Serena Williams’ husband, Alex Ohanian, a “groupie.”

In the Off The Record podcast, 21 Savage revealed that he encouraged Drake to pour out all his honest feelings on the album. He said, “You know I’m gassing him. I’m behind him. Whatever he standing on, I’m standing on it, too. So say what you feel, n-gga, ’cause I’m riding.”