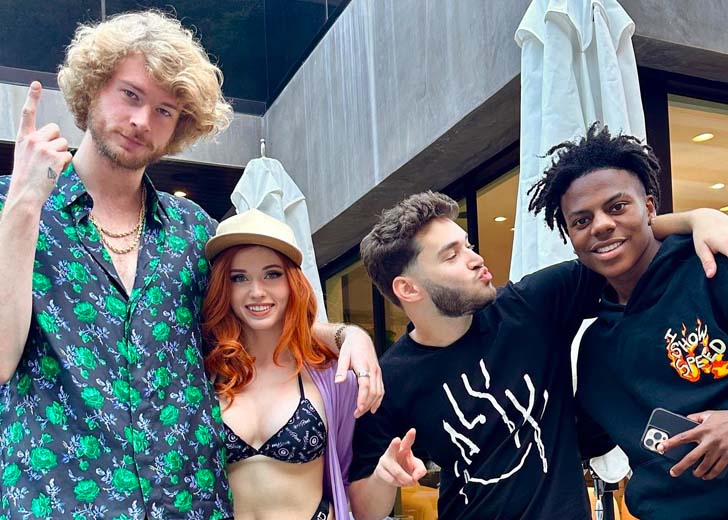 Amouranth ended her abusive marriage because her husband was financially and emotionally abusive to her.

Yung Gravy is an American rapper and songwriter best known for his 2016 single Mr. Clean. The photos of Gravy hugging Twitch star Amouranth have recently led to rumors that the two are dating.

On October 28, Amouranth appeared alongside Gravy on Adin Ross’ hot-tub stream, sparking rumors of a possible relationship. However, there is no confirmation whether or not Gravy and Amouranth are dating.

Likewise, Gravy tweeted a photo of himself with his arm around Amouranth’s shoulders, standing alongside Adin Ross and YouTube star iShowSpeed on November 1, 2022.

He captioned the photo “Double Date.” This prompted fans to respond with their thoughts on the rumored relationship.

Fans may believe the singer is seizing the golden opportunity to date Amouranth because she is currently single. Recently, Amouranth ended her abusive marriage as her husband was financially and emotionally abusive to her.

Easterling met the rapper online and started chatting, dedicating videos to each other, and Facetiming. Their bond soon transformed into something. During Gravy’s Jeff FM interview, he stated: “It’s true. We’re going on a date soon because she’s recently single.”

Gravy also revealed his plans for romanticizing the date. He asked fans to share their date ideas to select the best. He told the host that he decided to do something special for their first outing, such as a beach date with Easterling.

After Gravy and Easterling made their red carpet debut at the 2022 VMAs, Easterling’s ex, Lopez, shared his thoughts on his Instagram Story. He wrote, “Unbothered!” over a shirtless photo of himself. Thank you for taking the leftovers, @yungravy! I’d rather be with my daughter and two grandchildren, whom Sheri Nicole forced me to abandon as a child, to be with her!”

After about two months of dating, Gravy and Easterling’s relationship ended. According to E! News, “It was very short-lived, and they wanted to get people talking. Easterling was interested in him and enjoyed the attention, but they both knew it wouldn’t be serious.” As of now, Gravy and Easterling remained good friends.

Moreover, Gravy was also in a relationship with a TikTok influencer Tana Mongeau, and they lived together during their relationship. Fans are unaware of his relationships but know that the rapper is obsessed with older women. He joked in 2018 that he was engaged to Brandi Love, who was married to Chris Potoski.

Besides Gravy’s dating life, he has a new album that dropped on October 28, 2022, called Marvelous. He has built an impressive music career for himself, and his 2022 hit song Betty (Get Money) was his first single to hit the Billboard Hot 100 charts. Aside from being a successful rapper and songwriter, Gravy also attempts to establish himself as a music producer. His mission is to discover and promote young performers.