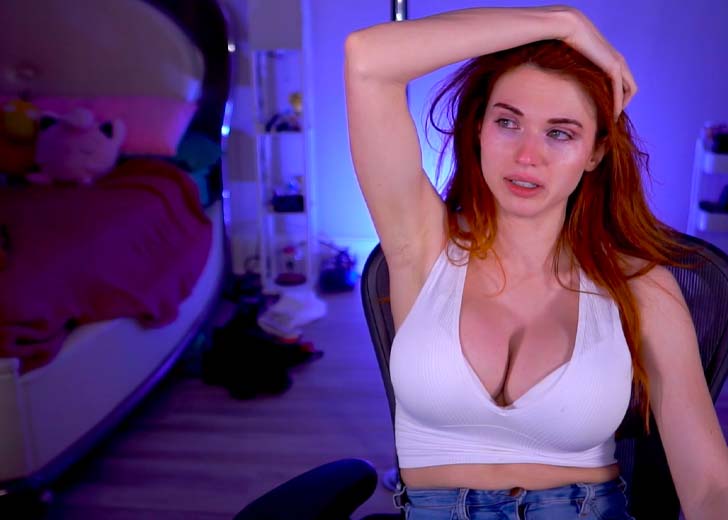 Amouranth said her husband forced her to continue pretending to be single and working as a hot tub streamer.

Popular adult Twitch streamer Amouranth has made headlines after revealing on a stream that she was in an abusive relationship with her husband.

Amouranth has hidden her personal life from her fans for many years, but she recently revealed everything about her relationship. She went live on Twitch on October 15, telling about her toxic marriage, and accused her husband of domestic and financial abuse during her live stream.

According to the Twitch streamer, her husband has complete control over her finances and other assets, making it impossible for her to leave him. He is also accused of forcing her to go on stream and threatening to kill her dogs if she did not.

While they were on the phone on that same stream, her husband yelled at her and called her a liar.

Likewise, Amouranth claimed in an earlier video that her husband forced her to continue pretending to be single and working as a hot tub streamer. Her therapist even told her that it was a form of emotional abuse and that she lived in a fancy prison.

The Twitch streamer also claimed he threatened to leave her with $1 million if she took legal action against him. Her husband allegedly threatened in court to burn all of her money and put it all in crypto.

Moreover, Amouranth said that all of her accounts use two-factor authentication and are linked to her husband’s phone number. She has also shared text messages between herself and her husband, exposing additional allegations of domestic and financial abuse. He allegedly deleted Amouranth’s social media and threw away her money after she failed to return Lee’s calls.

The streamer has been silent since Amouranth’s last broadcast ended. While others attempted to contact her and even the police, it was on October 17 that her content team provided an update to reassure worried fans of her well-being. Just hours later, Amouranth returned to the spotlight, providing a direct update on her current situation.

She said, “As of today, I have regained access to all of my accounts and finances. He’s not here because he’s looking for help. I’m looking for legal and emotional advice.”

Amouranth is planning a new beginning after divorcing her abusive husband

Amouranth can enjoy her newfound freedom after leaving the abusive relationship. In a stream, she stated that she is safe and has regained access to her social media and bank accounts.

She began the hour-long video by saying that her friends, family, and haters had reached out to offer their support. She expressed surprise at the outpouring of support, a sentiment she repeated several times throughout the video.

Amouranth is living a free life after the divorce from her abusive husband. (Source: Twitter)

The streamer answered questions about her current plans by saying she needed to know when she’d return to a full-time schedule.

Amouranth stated that she intends to stream again in the future. She expressed gratitude to her team and her intention to use her platform for good, reiterating her love of and desire to do work for the benefit of animals.

She also stated that she is looking forward to establishing her terms with her work and no longer worrying about her husband storming in and yelling while she streams.