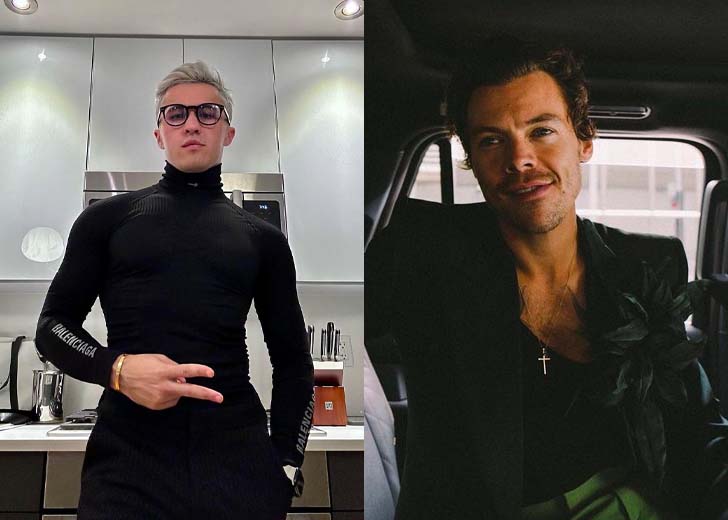 Chris Olsen’s wish is finally fulfilled after a failed attempt at the TIFF.

Chris Olsen has longed to be noticed by Harry Styles for a long time, and his wish has now been fulfilled.

The TikTok star was among the thousands in attendance at Styles’ Halloween-Themed show: Harryween, last night on November 2, 2022, in Los Angeles. And that’s where his dream came true.

As for what exactly happened, here is a little summary. Olsen had prepared a sign that read, “Daddy?” And at one point, when Styles was speaking to a fan, the camera operator turned the camera towards Olsen, who was still holding the same sign.

And the crowd went berserk when Olsen, holding the “Daddy?” sign, popped up on the Jumbotron. The Hollywood star walked a little and stood below the Jumbotron to see what the audience was cheering for.

And when he saw the reason behind the huge pop, he pointed at the Jumbotron and asked the audience, “Is that why you are screaming for?” The answer from the crowd was an even more, louder pop.

After that, Styles looked at Olsen and generously asked him, “How are you, sir?” The Don’t Worry Darling star then asked someone named Mandy to stand by, walked up to the edge of the stage, pointed his hands toward Olsen, and answered the “Daddy?” sign by saying, “Yes? Yes?”

Styles continued, “…there may be a communication breakdown from this distance but just know, yes?” and then added, “Mandy got fired, he [Olsen] wants Daddy, anyone else?”

That was it from the event as Olsen’s dream of being noticed by Styles and having a small interaction with him finally got fulfilled. However, Olsen’s excitement about it was far from over, with him using social media to express more of his feeling.

First, he took to his Instagram handle to share multiple pictures and videos from the memorable night. Among the photos and clips, one photo was of him holding his “Daddy?” sign, and one video was of the interaction with Styles. “this is my legacy (i will never recover),” he wrote.

Olsen then posted a duet video on his TikTok handle. The TikTok account of 102.7 KIIS FM had posted Styles’ entire interaction with Olsen, and Olsen had made a duet reacting to the events.

In another TikTok video, Olsen himself posted his entire interaction with the Hollywood A-lister after a fan asked him to do so. In the caption, Olsen mentioned that he took the video from fellow TikToker Kayla Kascht as his phone froze while recording.

But wait, there is more, as the chain of TikTok videos didn’t stop there. On November 3, he uploaded a video of him framing the “Daddy?” sign and putting it up above his bed. Olsen did that after a fan said, “u have to frame that poster now.”

Olsen is a renowned internet personality who came to fame through his content on TikTok. He initially used to make videos alongside his now ex-boyfriend Ian Paget. Yes, that’s right! Olsen is openly gay, and he came out a long time ago.

Speaking of his identity to E! News, he said, “My identity will already be something that can be of controversy, depending on who the audience is. So one of my passive-active missions in having this platform is to try to break that down and bring normalcy to this identity.”

“I had my first experience with a guy during the summer between seventh and eighth grade. When I went back to school, I told people I was bi, which I think was like a soft launch of sorts of my queer experience,” he added.