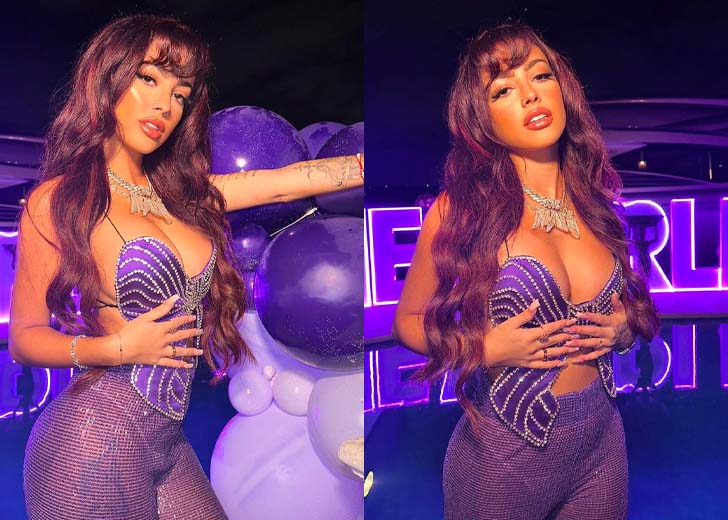 Malu Trevejo does everything with a bang and her birthday was no less. She recently turned the age of 20, and she celebrated her birthday in style, which she shared on her Instagram.

Trevejo is a singer from Cuba. She rose to prominence due to her videos on the video-sharing app Musical.ly.

She is now an Instagram influencer with over 10 million followers. Her debut single, ‘Luna Llena,’ was released on September 22, 2017, and was widely acclaimed.

Since then, she has been making music and increasing her fanbase. Mostly, she has fans and followers on her Instagram.

As a result, she mostly makes announcements via the platform, especially Instagram stories. And she did the same for her birthday.

Trevejo was born on October 15, 2002, making her age 20 in 2022. As she was finally done with the teenage phase of her life, she celebrated her 20th birthday with a bash.

The singer uploaded a photo of when she was a baby to commence her birthday. She captioned it as, “My first potito, and I did not like it, but I’m 20 y’all 😊🥰 happy birthday to me.”

She then posted a slew of pictures from her party, looking fabulous in a purple butterfly top and mesh pants. She wore a huge diamond necklace that spelled her name with black heels.

Trevejo did not celebrate her birthday alone. In fact, she invited many people via Instagram stories.

She wrote if any models or “baddie” wanted to join, they could. She asked them to hit her up since only she and her team could give out the passes.

Moreover, she asked the guests to bring their own bathing suits and towels to enjoy the luxurious pool party. The singer also provided them with the black SUV that said “MALU, the world is yours”  from a point so that they could easily come to her birthday bash.

She also posted the itinerary on her stories so that people would know what to expect at the party. It started at 2 PM and ended at 11 PM and included welcome drinks, snacks, a Jetski ride, dinner, and a live show, among others.

Trevejo reposted a couple of stories posted by others that featured her. They showed her enjoying her birthday party — whether she was drinking or dancing.

All in all, it seemed like the singer had a fun and exciting birthday. This is quite different from her last birthday since it raised a lot of controversies.

On her 19th birthday, Trevejo uploaded an Instagram post that announced that she had signed with Travis Scott’s label, Cactus Jack Records and Atlantis Records.

She claimed that her dream came true after being signed to those labels. Many believed that she was lying, especially after she deleted the post.

But in December, she threatened the rapper that she would expose him and his label if they did not let go of her contract. However, Scott’s rep said Trevejo was lying and it was fake news.

Who Is Vinessa Shaw’s Husband? Her Spouse and Children Discussed