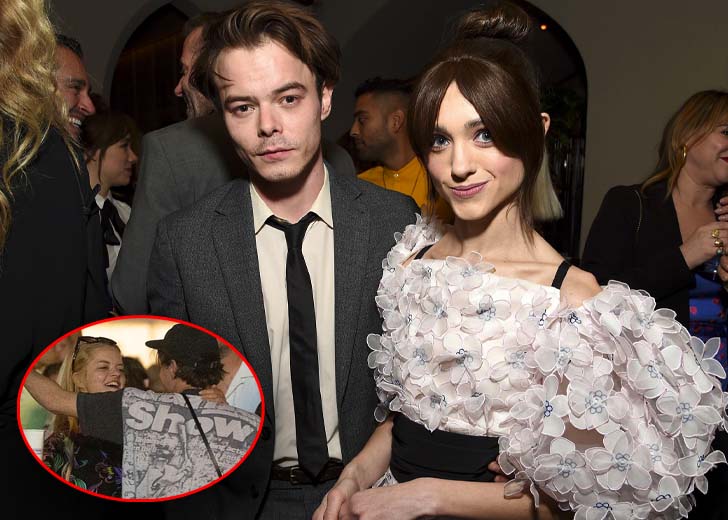 Charlie Heaton was captured with a blonde girl with her arms around his neck at All Points East in Victoria Park.

Charlie Heaton, star of Stranger Things, was photographed on Friday, August 19, with a blonde woman who put her arms around him. The two were seen on camera while attending the All Points East music festival in London’s Victoria Park.

Heaton and the anonymous female attended the music event together, but the Stranger Things actor’s girlfriend Natalia Dyer was not present with them. Many online comments implied that the mysterious blonde might be Heaton’s new girlfriend, which fueled separation rumors with Dyer.

Rumors of Heaton and Dyer’s alleged breakup have been spreading since the COVID lockdown. But during the Stranger Things Season 4 premiere, the two did share the red carpet.

However, fans are concerned about Heaton’s breakup with Dyer after seeing this most recent photo of him with this unknown woman.

Did Charlie Heaton and Natalia Dyer break up?

After Heaton was captured with a blonde girl with her arms around his neck, fans attacked Heaton once the photos were made public, and most of them thought that this blonde woman was Heaton’s new lover.

Heaton appeared quite cozy with the blonde girl at Luno presents All Points East in Victoria Park following suspicions of a breakup with Dyer surfaced.

The fans started investigating and found out the blonde girl was no other than Heaton’s close friend, Lauren Cherice. Heaton and Dyer even attended Lauren’s wedding a few months back.

Fans also found out that Heaton was not alone with Cherice at All Points East in Victoria Park. Her husband and a group of friends were also present with them.

However, according to Dailymail, Heaton and Dyer were on a shopping trip together in June. Given these public appearances, it is very plausible that the two are not separate.

Many of today’s power couples met on set while filming; just like that, Heaton and Dyer also had their first encounter while filming Stranger Things in 2015.

Everyone liked their on-screen relationship, and their off-screen romance likewise started slowly. After a few months of the series’ release, viewers began to believe that the two performers had something going on in real life.

When they were sighted together at the Los Angeles International Airport following the Golden Globes, the couple sparked even more dating speculations in 2017.

The pair started to make an appearance on each other’s Instagram and also made their red carpet debut in 2017.

In 2018, Dyer opened up about their relationship for the first time and explained [via US Weekly], “He’s alright I guess. He doesn’t mess up our scenes too much!”

Charlie Heaton is a dad

Heaton has a child with his ex-girlfriend Akiko Matsuura, a Japanese drummer and vocalist. A source told US Weekly that the child lives with Matsuura.

The source also revealed, “Charlie visits.” During filming Stranger Things, Heaton spent most of his time in LA but somehow managed to visit his son. “They are amicable co parents,” an insider disclosed to US Weekly.