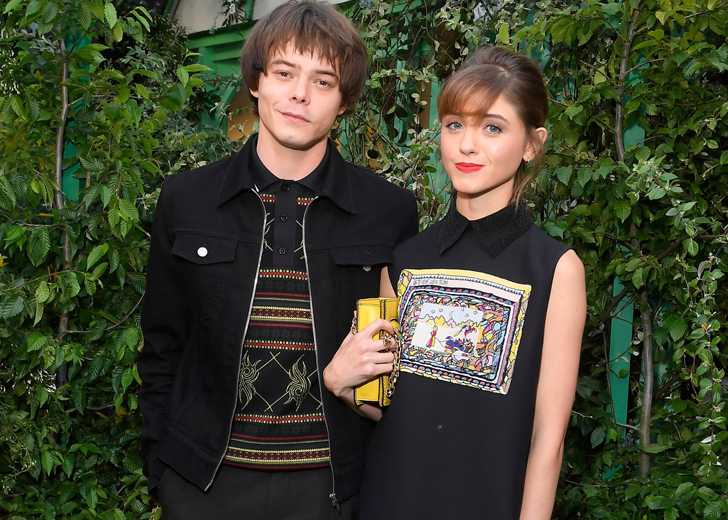 Natalia Dyer is an American actress best known for her portrayal of Nancy Wheeler in the Netflix sci-fi horror series titled Stranger Things.

Through the show, she also met a very special person, who is now her boyfriend. Dyer has been in a real-life relationship with her Stranger Things co-star and on-screen boyfriend, Charlie Heaton, who plays the role of Jonathan Byers in the series.

Here is a complete timeline of Natalia Dyer and Charlie Heaton’s relationship!

Rumors and Confirmation of Natalia Dyer and Charlie Heaton’s Relationship

Dyer first met her now-boyfriend on the sets of Stranger Things, where they are each other’s love interests. Soon, their on-screen romance turned into off-screen romance and it has blossomed since then.

On September 9, 2016, Heaton featured Dyer on his Instagram handle for the first time, apart from the show’s promotional posts. The picture was from the actor’s trip to the island of Menorca, where he had gone alongside Dyer and some of his friends.

On September 14, 2016, Dyer featured Heaton for the first time on her Instagram handle when she posted a picture of the actor holding up three birds, one each on his shoulder, head, and arm. This led people to speculate if they were dating in real life.

In that year’s Halloween, Dyer, Heaton, and their two other friends dressed up as the four main characters from The Wizard of Oz. In January 2017, the two were spotted leaving Los Angeles International airport just after they had attended the 74th Golden Globe Awards.

All of this led the speculations to fire up. In the same month, Life & Style magazine reported that the two were indeed in a relationship. Additionally, a source mentioned that they began dating way before October of 2016.

Despite the source’s claims, on March 23, 2017, Dyer and Heaton neither confirmed nor denied their togetherness when they were asked by TMZ whilst leaving the Los Angeles International airport.

However, the air was finally cleared up on October 4, 2017, when they were caught holding hands and walking down the street in New York City. After that, it was official that Dyer and Heaton were in a relationship.

After it was officially confirmed that the co-stars were dating in real life, Dyer and Heaton’s affection towards each other was seen in public more often.

On November 7, 2017, the two were spotted doing some window shopping in the streets of Paris while they were there during the press tour for Stranger Things season two. Around a week later, while they were in London, they were caught kissing each other in the middle of the street.

On December 4, 2017, they made their first red carpet appearance as a couple as they attended the 2017 Fashion Awards in London. The duo looked dashing as Dyer donned a beautiful star-embellished burgundy dress and Heaton wore a satin canary yellow bomber jacket.

Likewise, on the occasion of Dyer’s 21st birthday, January 13, 2018, Heaton took to his Instagram handle to wish his partner. Accompanying the post was a cute caption. At the end of it, he wrote, “P.S – Not feeling too well but I still wanna meet you at piedmont park tonight x.”

On April 14, 2018, Dyer and Heaton were spotted twice at the Coachella, a music festival, together. On September 16, the duo made yet another big event as they walked in at the Emmy Awards arm in arm.

On January 21, 2019, Dyer praised her boyfriend during the 25th annual Screen Actors Guild Awards as she said, “He’s alright I guess. He doesn’t mess up our scenes too much! [She jokes] No, he’s great. He’s talented, like everybody in the cast. They’re all super, just great to work with.”

A week later, on January 28, Heaton accompanied his partner as her date during the Los Angeles premiere of the Netflix movie Velvet Buzzsaw, in which Dyer played the role of Coco.

In the next month, the actor opened up on his relationship with Dyer as he said, “You can break the walls down with your partner. Because we work in the same industry and have had similar trajectories, we’ve gone through it together.”

He continued, “Sharing that does bring you closer. They understand something that maybe no one else would. You go into high-pressure situations together but you can share those insecurities or whatever they are. The great, happy times, too…Really f**king sweet!”

Similarly, in July 2019, Dyer talked about the perks of working together with Heaton. She stated, “It’s an interesting thing to work with somebody who you go home with. It’s always really fun. We’re really comfortable with each other, so we can play and feel more free, and we can talk about it before.”

Dyer and Heaton’s Relationship After 2020

Speaking of Dyer and Heaton’s relationship after 2020, their cute moment was first seen on the occasion of the actress’s 25th birthday, on January 13, 2020. Heaton had shared a cute picture of himself alongside Dyer and captioned it with a simple cake emoji.

Following that, there haven’t been many public appearances of the duo. In addition, both of them also haven’t featured each other on their social media handles in a while.

One of the main reasons behind it might be the lockdown caused by the COVID-19 pandemic, due to which they might not have been able to meet each other more often.

It might also be possible that the couple has gone back to their old ways and are keeping their togetherness low-profile for now. As of now, they are still together and there hasn’t been news of their split.