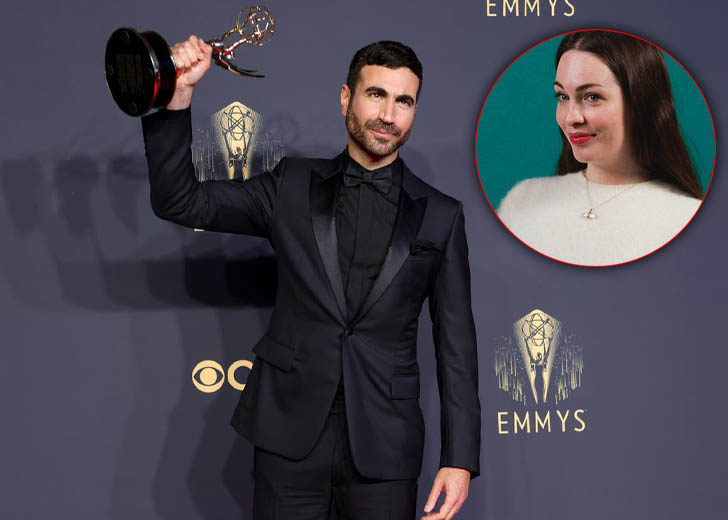 Brett Goldstein is an English actor and writer who recently made it to the headlines after his portrayal of Roy Kent in the Apple TV+ television show Ted Lasso (2020-present). Besides, for his performance, he even won a Primetime Emmy award over a week ago.

Not only he is an actor on the show, but he is also one of the main writers and producers. Other than Ted Lasso, Goldstein has acclaimed fame for his work in 2015’s SuperBob (actor), 2015-16’s Hoff the Record (actor/writer), and 2020’s Soulmates (writer).

Ever since his rise to fame, people have been very eager to know several details related to him. Among all other queries, one of the main is about his personal life as he has always kept it secret. However, all of that changes now as his relationship status is officially known — Goldstein is in a relationship.

Who Is Brett Goldstein Dating Now?

Goldstein is presently in a romantic relationship with a fellow English comedian named Beth Rylance.

Their togetherness was made official by the actor himself during his Emmy Award acceptance speech, on September 20, 2021. While delivering the speech, he firstly thanked his fellow cast members of Ted Lasso as well as his family members.

Then, he went on to say, “Beth, I love you,” making his relationship with her official.

Following Goldstein’s Emmys win, on September 21, his partner took to her Instagram handle to share the actor’s acceptance speech and put on the caption, “I wanna cry so bad, but I don’t think I can spare the moisture.”

Rylance also made a funny joke on Twitter when she tweeted, “My godmother has just text [sic] me to say congratulations on my boyfriend’s Grammy award and this is why I love her.”

Before the official confirmation, the Comedian had teased her relationship with Goldstein multiple times. For instance, just a day before the Emmys, she had tweeted, “Today is the day that my boyfriend goes to the Emmy’s as a Best Supporting Actor nominee and I am at home on my second load of laundry.”

Moments later, she made another follow-up tweet, as a joke, as she wrote, “Just to confirm, my boyfriend is Kenan Thompson off of SNL.”

On other occasions, she had posted some clips of the actor in some small comic skits during UK’s pandemic lockdown. Around the same time, she had also posted a picture of her wearing Goldstein’s Ted Lasso’s character, Roy Kent’s jersey.

As of now, all of Rylance’s tweets as well as Instagram posts are not available as she has deleted her social media accounts. The reason behind it is still unknown.

Prior to all of the teasings and final confirmation, Goldstein’s co-star, Hannah Waddingham, had mentioned to PEOPLE that he “has a girlfriend.” Other than that, no other details had surfaced on his girlfriend until now.

Previous to his relationship with Rylance, Goldstein might have been in some relationships but he has never been married to a wife.

The English actor has always been very secret when it comes to his personal life. He rarely opens up on his love life, either in public or on his social media handles.

As a result, his past dating relationship details are unknown, if he was in one.

Speaking more of his recent acting gigs, he made a short appearance in 2021’s TV series short titled Robot Chicken. Then, he went on to appear in Ted Lasso.

As for his credits as a writer, in 2020, he worked as a writer in two acting projects – a movie titled This Nan’s Life and a TV show titled Soulmates. In 2021, he went on to write three episodes of Ted Lasso.