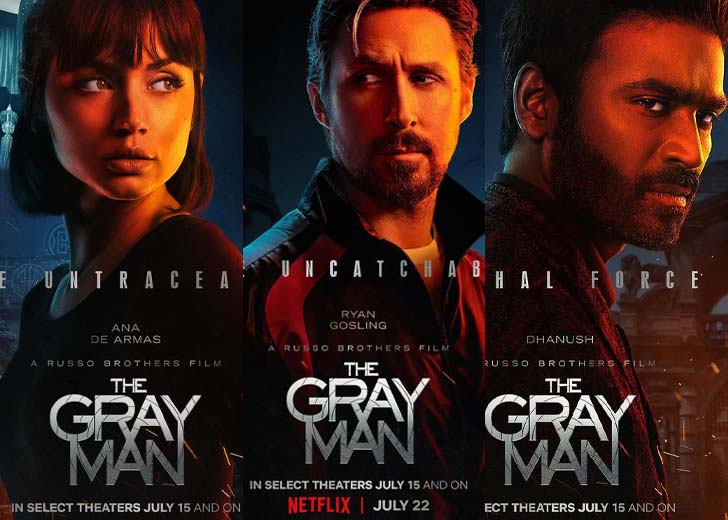 All we know about Netflix’s ‘The Gray Man.’

Netflix has finally released some official posters for one of their most anticipated upcoming movies — The Gray Man.

On Monday, May 23, 2022, Netflix dropped some exclusive posters – one each for their lead stars – and the following day, the trailer for the action-thriller movie was also released.

The Instagram post contained three red-themed posters. The first poster was of Ryan Gosling as Court Gentry aka Sierra Six. “The Uncatchable” was written just above the La La Land star’s name.

The directors of the movie Anthony Russo and Joseph Russo aka the Russo Brothers had also shared those posters. They went on to write the caption, “Choose your character… #TheGrayMan is available on Netflix on July 22. TRAILER DROPS TOMORROW.”

The trailer eventually came out and fans were happy to see their favorite stars.

While the much-awaited trailer for the movie was set to release a day after the posters were released, Indian fans/audience were angry all over the comment section and asked the directors as to where is the poster for the Indian star Dhanush – also featured in the film.

Just an hour later, the Russo brothers fulfilled the wishes of the Indian fans and released an official poster featuring Dhanush. Indian actor’s poster was much like the posters of the three leads and the same theme was used. “Lethal Force” was written above his name.

Before the release of the posters and the announcement of the official trailer’s release date, there were only a few stills from the movie and sets released by the directors.

The first preview – which was of around 2 seconds – was first shown on February 3, 2022, during the Netflix 2022 Movie Preview video. Then, on April 25, the Russo brothers released eight exclusive first look pictures from the movie.

Stars like Gosling, Evans, Armas, Regé-Jean Page, and Dhanush were featured in those pictures. Another new still was shown when Gosling and Evans were featured in Empire Magazine’s “Huge Summer Preview!” which contained multiple huge upcoming movies, including The Gray Man.

For the last few days, the Russo brothers had been teasing the trailer’s release date by sharing a picture of Gosling’s character looking out of a broken door of a moving train while holding a gun. As the days passed by, they removed one carriage from the end of the train.

Well, now that some exclusive posters have been released, the fans are eagerly waiting for the trailer. And the hype of the movie has already reached the sky thanks to the amazing cast members.

The Gray Man has great cast members and some names have already been dropped earlier. To repeat those names, the lead casts are Ryan Gosling, Chris Evans, Ana de Armas, Regé-Jean Page, and Jessica Henwick.

Speaking more about the movie itself, it is an American action thriller film which is directed by Anthony and Joe Russo and produced by their company named AGBO. The screenplay is co-written by Joe Russo, Christopher Markus, and Stephen McFeely.

The Gray Man is based on Mark Greaney’s 2009 novel of the same name. And reports have mentioned that the Russo brothers are hoping to kickstart a franchise that is based on Greaney’s Gray Man novels.

It’s also reported that the movie has a production budget of $200 million, making The Gray Man the most expensive film ever made by Netflix. As for the plot, it’s yet to be known.

But, the synopsis reads, “When the CIA’s most skilled mercenary known as Court Gentry aka Sierra Six accidentally uncovers dark agency secrets, he becomes the target and is hunted around the world by psychopathic former colleague Lloyd Hansen and international assassins.”

Coming over to the release date of the movie, The Gray Man is set to have a limited theatrical release on July 15, 2022. One week later, on July 22, 2022, the movie will be available to stream globally on Netflix.