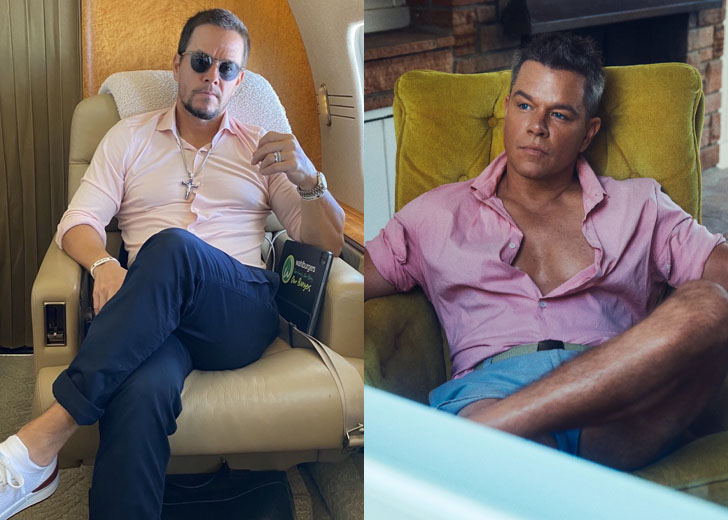 Everything on the confusion!

It has been something of a usual thing for fans to get confused between two or more celebrities because they look so much alike.

The same could be said for these two big Hollywood stars: Mark Wahlberg and Matt Damon. The two-time Academy Award nominee is often confused with being the same as Damon and vice-versa.

As Wahlberg and Damon have already become giant figures in the entertainment industry, they have gained millions of fans worldwide. Due to such popularity, it’s sure that people would come up to you and ask for pictures or autographs.

During one such fan moment, Wahlberg was mistaken to be Damon — because they lookalike each other. In early August 2013, Wahlberg was out and about to enter his car.

Just at that moment, one fan named Angelique Dormevil screamed “Matt Damon!” at Wahlberg. The actor agreed to a picture with the fan and her mother — she had wrapped her arms around his waist.

After taking those pictures, she sent them to one of her friends and wrote, “We saw Matt Damon.” But, her friend clearly didn’t mistake Wahlberg for Damon as they shot back by sending the real picture of Damon.

Following the realization, the fan wrote to her friend, “Lmao, I screamed “Matt Damon!!” “He didn’t correct us at all, lmao.”

Later, Wahlberg got hold of the conversation between the two friends and shared it via his Facebook page with the caption, “Close enough.” Upon posting that, the same fan made a comment saying;

“Sorry for the mistake. My mom and I saw him and I yelled out Matt Damon. I knew all his movies but I confused the two awesome actors.”

In August 2016, Wahlberg did an interview with Extra’s Mario Lopez, where he talked about the topic of mistaken identity. He said that people often say to him that they loved him in The Bourne Identity — a 2002 movie that starred Damon, not Wahlberg.

“And I just say, ‘Thank you,'” he added. Additionally, Wahlberg mentioned what Damon had said to him. He said, “Matt always gets it all the time too. They say they loved him in ‘Ted’ or one of these other movies that I’ve done.”

After that, Wahlberg stated what he and Damon had agreed to. He said, “We just kind of laugh it off. I never correct anybody, I just say, ‘Thank you very much. Watch me in ‘The Bourne Identity 4.'”

Coming over to what Damon has to say on the topic, in August 2013, Absolute Radio host Geoff Lloyd asked him if people ever mistook him for somebody else when he was out and about.

In reply, the Academy Award winner said, “Yeah, yeah. All the time. I get Mark Wahlberg a lot. And I have talked to Mark about it, uh, because he gets me. People would come up and say, ‘I love you in The Bourne Identity.’

As Damon went on, he also talked of a deal that he had made with Wahlberg. He said, “So, Mark and I have a deal. If we are mistaken for one another, we have to be as polite as possible.”

One of the reasons why people might be getting confused between the two is that Wahlberg and Damon have shared the screen in the 2006 movie titled The Departed. And of course, another reason is that they look alike.

Other celebrities are also mistaken for Matt Damon

Wahlberg isn’t the only one that falls in the line of stars who are mistaken for Damon. There are a couple more, and actors Brad Pitt and Leonardo DiCaprio fall under that list.

During their interview with BBC Radio 1’s Film Critic Ali Plumb in April 2019, both Pitt and DiCaprio shared their stories. Plumb asked his guests when was the last time people went ‘Do I know you?’ or confused them with other renowned persons.

In reply, both of them give the same answer at the same time: Matt Damon. “I get Matt Damon,” said DiCaprio, and Pitt chipped in by saying, “I get Matt!” Additionally, DiCaprio said that he was once confused with being Brad Pitt.

Following that, Pitt mentioned that he has even signed autographs as Matt. He gestured a random squiggle with his hand and said, “They’ll figure it out later.” Robbie seemed to agree with Pitt as she said, “Yeah, why ruin their day? Why ruin the moment?”

As for why Pitt and DiCaprio get confused with Damon, there is a couple of good reasons. First, all three of them have been making headlines years after years for their work. Secondly, they have shared the screen.