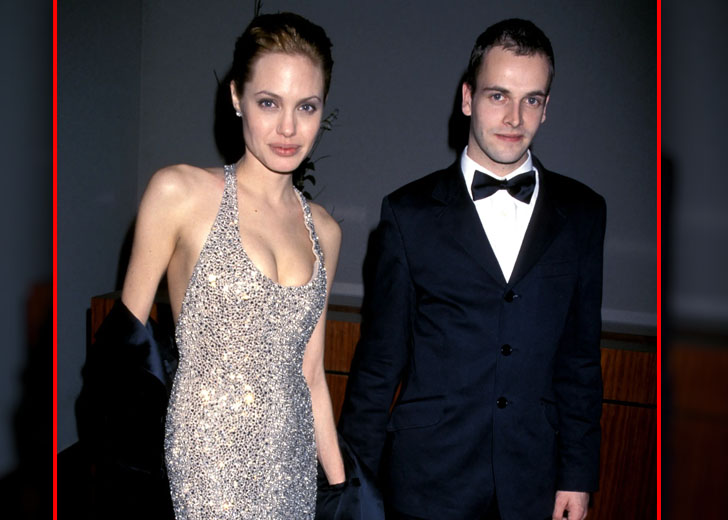 The two are still friends at present.

Jonny Lee Miller and Angelina Jolie could be a fine example of former spouses still being friends after their split.

The formerly married couple’s dating and marriage relationship lasted for a brief period only. However, they still have a lot of love and respect for each other even after their divorce over two decades ago.

They could be seen spending hours with each other over dinner on multiple occasions. Here is a detailed look at the couple’s married life!

The English actor and the American actress first met each other in 1995 while filming their movie Hackers. After their first meeting, Miller and Jolie fell in love but reportedly lost connection after the filming ended.

They eventually got reconnected again and began dating. Recalling that meeting with Miller, Jolie said in 2014 that she still associates that movie with the word “love.” “That’s where I met Jonny, who is still a great friend. So I think of him when I think of that,” she added.

She mentioned that though that movie looks very much ancient now, she and Miller had a lot of fun making that.

Jonny Lee Miller and Angelina Jolie got married in 1996

Around a year after meeting each other, Miller and Jolie were already head over heels in love. Taking that to a new level, they decided to share the wedding vows on March 28, 1996, in a private ceremony witnessed only by Miller’s best friend and Jolie’s mother.

During the wedding, the actor wore a black leather dress. On the other hand, his wife’s wedding dress was quite the talk of the down. Instead of a regular wedding gown, Jolie opted for regular black rubber pants and a white T-shirt.

But that wasn’t the main talk, as in the white T-shirt she donned, she had written the name of her to-be husband in her own blood. Speaking more on that, she said that she drew her blood through a surgical needle.

Additionally, she told the New York Times, “It’s your husband. You’re about to marry him. You can sacrifice a little to make it really special.”

Some months after the duo’s wedding, Jolie was again interviewed by the New York Times. She talked about life after her marriage with Miller, and her answers left some people dazzled.

The Eternals star mentioned that it was weird to get married immediately, and then “you kind of lose your identity.” “You’re suddenly somebody’s wife. And you’re like, ‘Oh, I’m half of a couple now. I’ve lost me,'” she added.

Elaborating more on that, she stated that she and Miller went on some morning show, and they “threw rice on us, and they gave us toasters. I was thinking, ‘I need to get myself back.'”

Miller and Jolie were quite the big deal in the entertainment industry – as they are now. They had to travel constantly due to their professions and had hectic work schedules.

That became one of the main reasons behind the split of the couple. Additionally, they had some difficulty where to live, as Miller is English residing in London and Jolie is American based in Los Angeles.

All of that led to their split just 18 months after tying the knots in September 1997. At that time, neither of them chose to file for divorce. But, their marital relationship officially ended when Jolie filed for divorce in February 1999.

Although their marriage ended in a bitter-sweet way, the actress has previously expressed her regret for not being able to make her marriage with Miller work. As per DailyMail, Jolie said this in an interview with Calgary Sun:

“He deserves more than I am prepared to give at this time in my life, but there is a very good possibility that we could get married again some time in the future,” she further added.

On the other hand, Miller had expressed to Heavy that he has no regrets over the time he and Jolie spent together. He said, “There are no regrets and no bitterness. Marriage was something that didn’t work out, and I had to make the decision sooner or later. I decided to make it sooner.”

Following Miller and Jolie’s divorce, the former couple went on their respective lives. Miller married Michele Hicks in July 2008 after two years of dating. They welcomed a son named Buster Timothy Miller in December 2008. The couple divorced in 2018.

As for Jolie, she got married twice afterward. Her first marriage was with Billy Bob Thornton from May 5, 2000, to May 27, 2003. Then, on August 14, 2014, she tied the knots with Brad Pitt after years of dating – she shares three biological and three adopted children with him.

Jolie’s marriage with Pitt also didn’t work out as she filed for divorce in 2016. Their divorce was finalized in 2019, with the court giving joint custody over their six children.

With all the happenings in their professional and personal lives, Miller and his ex-wife Jolie have still maintained a friendly bond over the years. The divorced couple has occasionally been spotted spending some time.

In June 2021, Jolie reportedly had dinner with Miller at his apartment, with the actress bringing over a bottle of Peter Michael wine. Months later, in October 2021, they were again spotted together at Beverly Hills.

These moments have led some to wonder if they are getting back together as both of them are single now. However, there has been no such news.