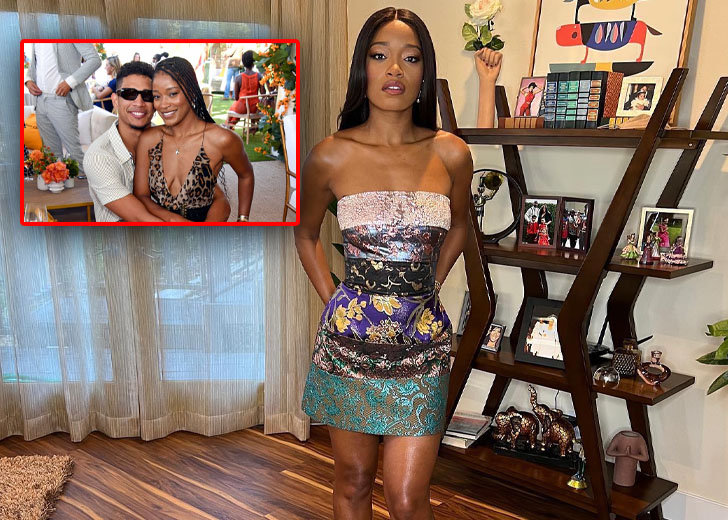 “There is stuff that I do save for family and friends,” Keke Palmer on her decision to be private.

Keke Palmer and her boyfriend Darius Jackson seem to be the perfect couple who have supported each other through thick and thin.

The True Jackson, VP actress and her boyfriend have been dating each other for a while now. However, the exact timeframe couldn’t be told as they have kept their relationship details private.

It has only been reported that Palmer and Jackson possibly met each other while attending Issa Rae and Diddy’s Memorial Day party in Malibu in May 2021. So, it could be said that their relationship is rather new.

Palmer had already been established as the one to keep her love life away from the public and social media handles. And Jackson seems to have tagged along with his girlfriend on this matter.

The couple had been so private that their togetherness was revealed by Jackson himself when he wished on his actress partner’s 28th birthday. On August 26, 2021, he had taken to his Instagram handle to share a series of pictures taken alongside his beau.

Palmer and Jackson’s first meeting was reported to be in May 2021. And it was on August 26, 2021, that Jackson made his relationship with Palmer Instagram official.

Considering those two dates, it could be said that the couple hadn’t been together for a long time before going public with their togetherness. Nonetheless, in such a short time, they had been through their lowest and helped each other in it, strengthening their bond.

This specific detail was revealed when Jackson wished Palmer on her 28th birthday. In the caption, he first wrote, “To the birthday girl.. never would’ve expected summer 2021 to turn out the way it did but here we are.”

“You’ve been a blessing from above & I thank you for showing me a lot of feelings I didn’t know I had in me & also seeing me as someone you can finally be yourself to.”

The caption concluded with Jackson telling Palmer to enjoy her day, make most of it, and “I love you.”

When Palmer saw such a sweet birthday wish from her partner, she went towards the comment section and wrote, “I love u thank you.”

Two months later, the actress featured her boyfriend on her Instagram handle while sharing a video with him. Like her partner, she also wrote some lengthy words which were dedicated to Jackson.

She wrote, “Without being too mushy because I HATEEEE THAT, it feels really nice to not be afraid to show this kind of care for someone that I don’t share the same blood with. I thought it could never happen, I can be quite guarded, but I appreciate you for being a safe space. I will always cherish what you have given me.”

As of now, the couple has once again opted to keep their relationship low-key. Furthermore, Jackson’s birthday wish to Palmer and the said-Instagram post of October 2021 has also been deleted.

Who is Keke Palmer’s boyfriend?

As mentioned earlier, Keke Palmer’s boyfriend is Darius Jackson, also known as Darius Daulton. It has been reported that he is the younger brother of the Insecure film actor Sarunas J. Jackson.

As for his profession, his LinkedIn profile reveals that he has been working as a Fitness Instructor for Inspire Fitness US since September 2019. At the same company, he worked as a Production Supervisor from September 2019 to February 2021.

Jackson’s first working experience came in January 2017 when he joined KBCH Internet Radio – left the workplace in August 2017. After that, he worked as a Color Analyst & Reporter for Lawndale City TV from August 2017 to May 2018.

In June 2017, he joined 24 Hour Fitness as its Service Representative – left in February 2020. Similarly, he was a Street Team Member of Anaheim Ducks from September 2018 to September 2019.

In June 2019, he had taken the part-time job of a Promotions Assistant at iHeartMedia – left in September 2020. His last workplace before his current one was at Bleav Podcast Network, where he worked as a Show Host from June 2020 to July 2021.

Apart from his working experience, it’s known that in 2017 he took an intensive 30 weeks course in radio broadcasting at The Academy of Radio and TV Broadcasting. He learned the fundamentals of board operation, copywriting, voiceovers, news writing & reporting, music programming, etc.

We have already established that Palmer is private about her love life, a thing which she has freely mentioned in during her interview with Harper’s Bazaar.

She mentioned that she once used the dating app called Raya, and her date “felt like networking.” Adding more, she said, “I’ve always had the same philosophy when it comes to dating.”

“Not that I wouldn’t give someone a try. But trying to keep my private life outside of my work life, to me, it’s easiest when you don’t date someone with the same career.”

She also talked about not posting about her love life on social media and said, “I don’t really do relationship stuff online, mainly because I don’t know how I would do it without looking, like, cheesy or something, you know?”

“Yes, I’m a hundred percent authentic, but there is stuff that I do save for family and friends. I do have a Finsta. Sometimes I forget to post on there, ’cause I do post a lot of real moments and raw moments on my main Instagram page,” she added.

In the end, she said that when it comes to romance, posting about it online doesn’t really occur naturally to her. So, she just lets it be and doesn’t force it.

Although the Winx Club star has kept most of the details about her love life upto herself only, tidbits of information have been found concerning her past relationships.

Palmer’s first known relationship goes back to 2012 when she was dating her producer boyfriend named Rodney. In a conversation in the Sway In The Morning podcast, she revealed that they were living together in California – not in Atlanta.

Later, it seems like the two broke up. Then, in 2015, she sparked rumors with her Brotherly Love co-star Quincy Brown. However, none of them confirmed or denied those speculations. Palmer’s other unanswered romance rumor was with rapper Meek Mill.

Furthermore, her relationship before her current one was with music artist Styn. The now-former duo reportedly began dating each other in 2019. Besides, in 2020, Styn had occasionally featured Palmer on his Instagram handle.

However, he didn’t give out many details, making things private. But when they were caught holding hands during their outing in Hollywood, it was seemingly confirmed that they were a thing. That instance happened in late February 2021, and it looks like they separated soon afterward.