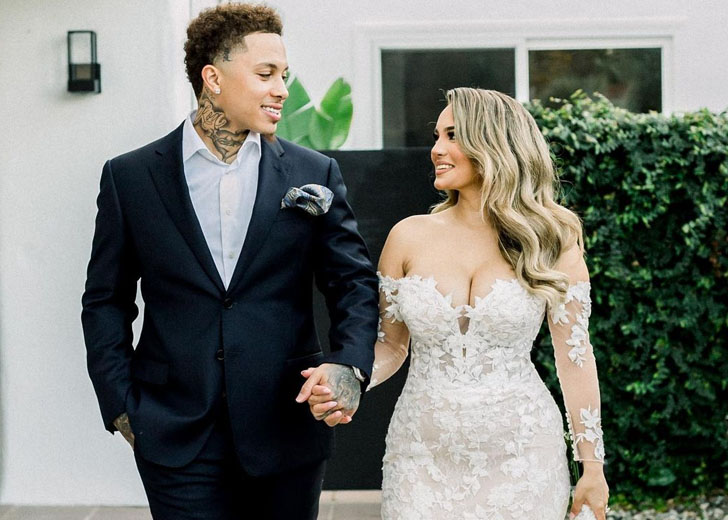 Everything you need to know about JuJu and Des’s personal life!

Julius Brown and Destiny Rodriguez, who are majorly known as JuJu and Des, are a YouTube power couple who have gained the limelight through their content on the video-sharing platform.

They have garnered more than 1.42 million subscribers and 206 million views on their joint YouTube channel. Additionally, they have over 1.5 million followers and 25.3 million likes on their joint TikTok handle.

JuJu and Des have certainly achieved a level of success as social media personalities. However, they might not have even made it this far if they hadn’t met each other and fallen in love.

Their relationship has come a long way since its initiation. They dated for years before taking their togetherness to a new level. Now, the couple is married and proud parents to their baby boy.

Here is everything about their relationship!

JuJu and Des got to know each other for the first time in as traditional a way as in the past – through their mutual friends. The year was 2017, and Rodriguez had completed her bachelor’s degree from UCLA and worked as a bartender at Hooters.

It was at her workplace where Brown first met his future wife. Similarly, around that time, Brown was pursuing a career in modeling and acting. He had also opened a YouTube channel and gained a little bit of popularity via Instagram and Twitter.

Coning back to their relationship, Brown started the conversation by asking Rodriguez to get her a Sprite. After that, he asked his cousin and took suggestions on how he should approach and talk to her.

Slowly and eventually, conversations began to build. They even went on a hike with their friends, which gave them some free time to have a good conversation in nature. Then, they went on a few dates and ultimately initiated their romantic relationship.

Months after they began dating, in July 2018, they opened their joint YouTube channel and started to upload various types of videos. As years passed on, both personal life happiness and professional life success entered the couple’s lives.

After years of togetherness, on April 9, 2021, Brown went down on one knee and asked Rodriguez to be his wife with a ring on his hand. She accepted her then-boyfriend’s proposal, and they got engaged.

Around a day later, Rodriguez and Brown took to their Instagram handles to announce their engagement and give some glimpses on how the proposal went through.

Their posts revealed that Brown proposed to her with a diamond engagement ring in Big Sur, California, in an open sky and clear ocean view.

Less than two weeks after announcing their engagement, on April 21, 2021, Rodriguez and Brown shocked their fans with another happy news when they announced that they were expecting their first child in October 2021.

Rodriguez had shared a picture of her holding her baby bump while her then-fiance stood beside her. Their pet dog was given the duty to hang a board, in which “Mom and Dad are getting me a Human. Due October 2021” was written.

“WE ARE HAVING A BABY!! Our Rainbow Baby Will Be Here October 2021. WE ARE SO BLESSED!” Brown had captioned his announcement post.

In the next month, on May 20, the couple hosted a gender reveal event for their child. Close friends and family members were there to join it. And at the end of that spectacular party, they popped the party popper, and it was revealed that they would be welcoming a son.

The couple had documented the event held at Calabasas, California, and shared the video via their YouTube channel. Revealing the news on her Instagram handle, Rodriguez wrote, “I’m growing a BABY BOY! I can’t wait to meet my little King.”

But things didn’t go well for a bit of time for the couple as they tested positive for COVID-19. While Brown could recover quickly, Rodriguez had a difficult time recovering as she suffered from pneumonia and other complications amid pregnancy.

Thankfully, nothing serious or bad happened, and she recovered. No harm had been done to their baby. And on October 4, Rodriguez gave birth to her baby boy named Koa Cai Brown.

The birth procedure of their baby was also documented, which was later posted on their YouTube channel. Since the birth of their son, the couple has been busy raising him and giving him the best care possible.

JuJu and Des got married in late 2021

2021 was a great year for Brown and Rodriguez: they first got engaged and welcomed their son. And it was made more special when they shared the wedding vows.

On December 17, 2021, the couple posted a YouTube video revealing that they would soon get married. Then, on December 20, they made a joint Instagram post mentioning that they had gotten married in Los Angeles, California.

“Mr & Mrs. Brown. I Love You,” they had captioned the post. On the same day, they posted another YouTube video that documented one of the most special days of their lives. And in that video, it was revealed that they got married on December 15, 2021.

Since their marriage, the couple has lived some of the best days as a married duo and parents to their child. But, it seems as if nothing has changed as they still have the same amount of love they had for each other. As of now, the family of three reside in Los Angeles, California.

Is Bryana Holly Nicholas Hoult’s Wife? All You Need To Know