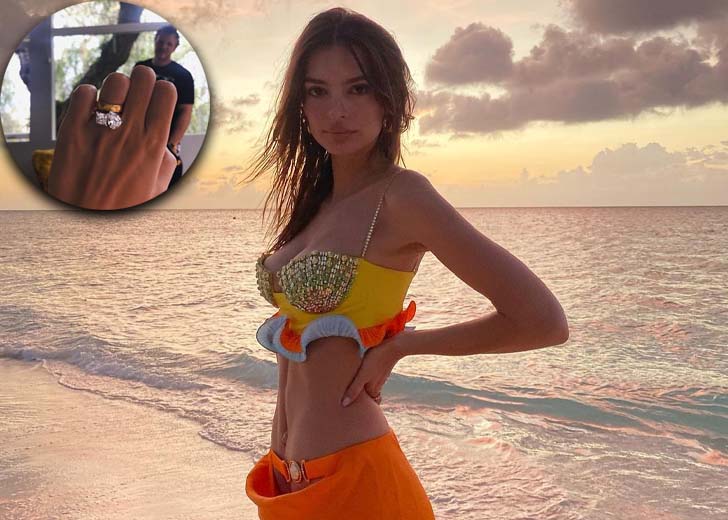 As a model, she has done modeling at several fashion shows as well as for different brands. She has also been featured on the cover of some popular magazines.

Not only the London native is successful professionally, but she also has a blooming personal life with her husband of over three years.

Emily Is Married to Sebastian Bear-McClard

The 30-year-old is currently married to Sebastian Bear-McClard, an American actor and producer. The two have been married for more than three years, having shared the wedding vows on February 23, 2018.

Ratajkowski and Bear-McClard first met each other just a couple of weeks before officially legalizing their bond. However, despite the short-lived connection, it seemed as they bonded very well.

On February 22, 2018, when both were at Minetta Tavern bar in New York, the producer proposed to his to-be wife. The model said yes, and they got engaged.

Later on, Ratajkowski surprised her followers by announcing her engagement through a series of Instagram selfies.

On the very next day, the newly engaged couple went to the New York mayoral office to legalize their bond and became husband and wife. On her special day, Ratajkowski went fully unconventional as she donned a mustard-colored power pantsuit and a long double-breasted jacket with matching flared trousers.

In addition to that, she was also wearing a simple circular gold pendant, a black brimmed hat that had a French netting veil over her face, with a cute pug accompanying her.

After the wedding was made official, she took to her Instagram handle to share the news, shocking her fans once again.

For their honeymoon, they went to the Utah desert.

Ever since they got married, they have been relishing their lives together. Ratajkowski and Bear-McClard are still together, celebrating their third wedding anniversary on February 23, 2021.

Sneak Peek into Their Engagement and Ring

Just a day before sharing the wedding vows, Bear-McClard proposed to his now-wife Ratajkowski. As he didn’t have a ring, the model initially said no, jokingly, of course.

Later, the New York native made a ring out of a paperclip attached with the bill they paid. Now that there was a ring, Ratajkowski said yes, and they got engaged. Soon after the engagement, they made plans to get married.

However, as the two had to wait for another 24 hours before officially legalizing their bond at the New York mayoral office, they spent that time searching for wedding bands. Then, in a conversation with Jimmy Fallon on The Tonight Show, Ratajkowski revealed that they bought an ounce of gold at Chinatown.

After buying gold, they finally found a store in Midtown, and a man agreed to melt down the gold and turn it into rings by hammering it with a blowtorch. When the wedding bands were made, they wore them to their wedding and have been wearing them since then.

Although the wedding rings were special, what caught the people’s eyes was the beautiful diamond engagement ring (replacing the paperclip ring) that Ratajkowski flaunts in style, which was seen more clearly in an Instagram post of July 11, 2018.

The new engagement ring had two diamonds attached to a gold band, one was a gigantic square princess cut, and another was pear-shaped. It was later revealed to Vogue that she hired her friend Alison Chemla to help her find the right setting.

The Duo Recently Welcomed a Baby

After being married for over two years, on October 26, 2020, Ratajkowski revealed that she is expecting her first child with her husband. The news was exclusively announced through a cover video on Vogue’s YouTube channel.

On March 8, 2021, Ratajkowski and Bear-McClard welcomed a son named Sylvester Apollo Bear. On March 11, the actress took to her Instagram handle to announce the news officially.

“Sylvester Apollo Bear has joined us earthside. Sly arrived 3/8/21 on the most surreal, beautiful, and love-filled morning of my life,” she wrote in the caption.

Since the birth of her son, she has usually been flaunting pictures alongside her baby. However, she has been doing so without revealing the face of her son—she usually blurs the face or covers it with a sticker/emoji.

Going by that, it seems like Ratajkowski doesn’t like to reveal the face of her newly-born son, at least for now. There is no news about having other children in the future as well.

Posted on September 17, 2021April 24, 2022
Cleo Rose Elliott once had an unhealthy relationship with her mother.
Read More