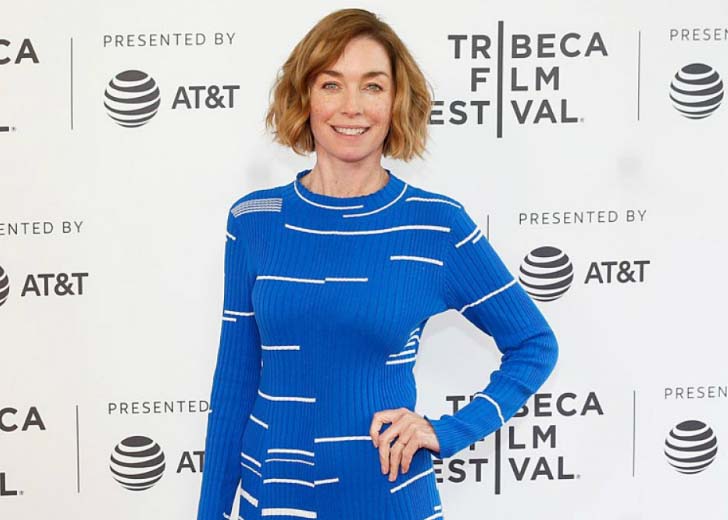 One of the veterans in the entertainment industry, Julianne Nicholson, has achieved a lot through her performances. Born on July 1, 1971, the Medford, Massachusetts native’s first career choice was not acting.

Initially, she started out as a model in New York. Six months later, she took a year break only to return as a model in Paris. But, the modeling career in Paris also lasted for another six months only.

Later, she returned to New York and enrolled at Hunter College. While studying there, she began working as a waitress and eventually developed an interest in acting. She left her studies and began to pursue a career in the entertainment industry.

Her first gig came in 1997 with a small role as Cara in the TV series titled Nothing Sacred. Afterward, her good performances landed her in some amazing roles in several acting gigs.

Although she has appeared in a number of movies, she has received more limelight for her performances in TV shows.
Maybe, that’s why she has more TV shows credits to her name than movies. Here is a look at Julianne Nicholson’s Top 5 TV shows, as per IMDb rankings.

Counting in descending order, the first TV show on the list is The Good Wife, a crime drama mystery series with an IMDb rating of 8.3 out of 10.

Nicholson played the cameo role of Callie Simko, an attorney, in the 4th season of the show.

She was accompanied by other cast members consisting of Julianna Margulies as Alicia Florrick, Matt Czuchry as Cary Agos, and Christine Baranski as Diane Lockhart.

The show follows the character Alicia Florrick who must provide for her family after her husband, a former state’s attorney, is sent to prison after his very humiliating personal life and corruption scandal gets revealed.

All of the seasons of the TV show aired on CBS. It was created by Robert and Michelle King, with several directors involved throughout the run of the show.

In the HBO series Boardwalk Empire, we saw Nicholson portray the recurring role of U.S. Assistant Attorney General Esther Randolph from 2011 to 2013. Her character was based on a real-life person named Mabel Walker Willebrandt, known as the First Lady of Law.

The American period crime drama TV show follows an Atlantic City politician who plays both sides of the law by conspiring with gangsters during the Prohibition era. It was created by Terence Winter, with 14 directors directing the show from the start to the end.
In the show, Nicholson appeared alongside Steve Buscemi as Enoch ‘Nucky’ Thompson, Kelly Macdonald as Margaret Thompson, and Shea Whigham as Elias ‘Eli’ Thompson.

The American medical drama television series, ER, was Nicholson’s ninth TV project. In the series, she guest-starred as Jordan in the 11th season.

The multiple award-winning show, which aired on NBC, followed the lives, loves, and losses of the doctors and nurses of Chicago’s County General Hospital. It was created by Michael Crichton.

The 50-year-old actress has appeared on three different shows with the same name of Law & Order, with her portraying different roles in every show.

While she played recurring and lead roles in the two other shows, she only guest-starred as Jessie Lucas in the 11th season of this particular TV show. Her appearance came in the 20th episode of the show titled ‘All My Children.’

The show was created by Dick Wolf. Its synopsis read, “Follows a crime (usually a murder), usually adapted from current headlines, from two separate vantage points, the police investigation and the prosecution in court.”

On the very top of the list is the recently released TV show, Mare of Easttown, with an IMDb rating of 8.5 out of 10. The 7-episode crime-drama show premiered on April 18, 2021, on HBO.

In it, the American actress portrays one of the lead roles of Lori Ross. She is accompanied by fellow cast members, including Kate Winslet as Detective Mare Sheehan, Jean Smart as Helen Fahey, Cameron Mann as Ryan Ross, and Angourie Rice as Siobhan Sheehan.

The show follows Mare Sheehan, a police investigator in a small Pennsylvania town, as she investigates a brutal murder while trying to keep her life from falling apart. The show has been receiving good reviews from viewers and critics.

All of the cast member’s performance was so good that the show has earned 16 nominations at the 73rd Primetime Emmy Awards.

As for Nicholson, she has earned a total of 4 nominations, including one at the Primetime Emmy Awards for Outstanding Supporting Actress in a Limited or Anthology Series or Movie.

The 5 feet 9 inches tall American actress has appeared in numerous TV shows in her acting career. Due to that, it might be unfair if we only listed the top 5 TV shows that she has been involved in.

Some of the honorable mentions in the TV shows category are:

Furthermore, we haven’t even listed some of the amazing movies she has played a part in. so, Here is the list of top 5 movies of Julianne Nicholson: