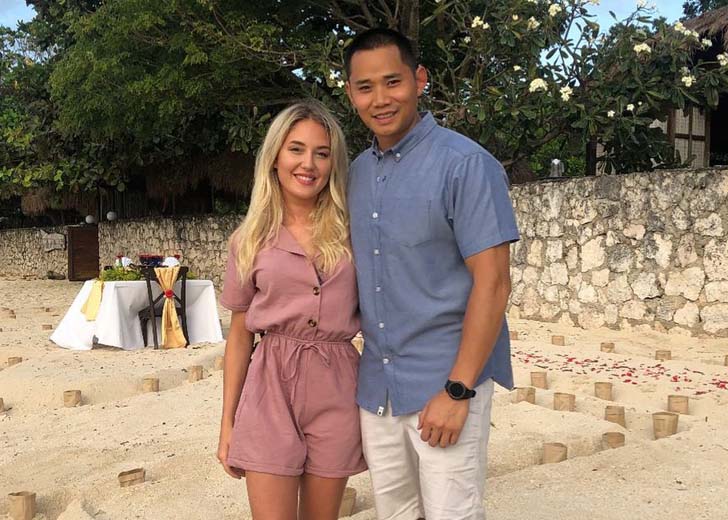 Yolanda Lynes is an English actress and writer known for her works in movies such as The Reals Target (2017), Dragon Kingdom (2018), and Knuckledust (2020).

She recently came into the spotlight for her role in the Marvel movie Black Widow, released on July 7, 2021. In the movie, she portrays the role of Widow, a trained assassin.

Now, with Lynes’s rising popularity, her fans are curious to learn about her life, more precisely about her love life.

Lynes Is Currently Engaged with Her Long-Time Boyfriend

The Black Widow famed actress has been relishing a relationship with her long-time boyfriend, David Cheung. The two are currently engaged as well.

Cheung is a Hong Kong-Chinese action actor, martial artist, and stunt performer best known for his stunts in Black Widow, 6 Underground, and Now You See Me 2.

The couple hit it off after they first met circa 2015. Later that year, in October, they officially started dating.

Marking the occasion of their second dating anniversary, in 2017, Cheung re-posed Lynes’s Instagram picture and captioned it writing, “Happy 2 year anniversary to my one and only Yolanda Lynes. Can’t believe how fast time is flying!”

Over 4 years later, on New Year’s Eve 2020, when both of them were at Shangri-La Mactan, Cebu, Cheung went down on his knees and eventually proposed to the actress. In reply, she said “yes,” and they got engaged.

Since then, the couple has been inseparable. They usually flaunt pictures alongside each other and celebrate different occasions. Most recently, the duo celebrated Valentine’s Day 2021.

Looking at their chemistry, fans have also been querying when Lynes would marry her partner. Maybe, very soon!

Lynes Is Yet to Disclose Her Age

Although some internet outlets have claimed Lynes was born on June 25, 1992, the actress, as well as, any official media has not revealed her actual date of birth and age.

That being said, Lynes, who was born and raised in the suburbs of the United Kingdom, celebrates her birthday in November every year. Her boyfriend Cheung wished her birthday in 2018 on the 22nd of November, writing,

Slightly late posting this photo but this months been a busy month. Happy 3 year anniversary and birthday to my love @yolandalynes.

Besides, the actress, who is of British nationality, has a younger brother. She stands tall at the height of 5 feet 4 inches (1.63 meters).

A Brief Look Into Her Movies and TV Shows

Lynes’ journey in the entertainment industry started in 2017 when she made her big-screen debut through the movie The Take Down. She played the role of Amber’s mother.

The same year, she starred, wrote, produced the movie The Real Target. She also performed stunts in that movie. In addition, she appeared as Mia in the short movie named Tengu, Birdmen of the Mountains.

In 2018, she appeared in two movies: Dragon Kingdom as Arete and LoveYatri as Skater Girl. She took a break in 2019 and didn’t appear in a single acting gig.

She started 2020 by portraying the role of Jenny in the short movie, Jenny & Jimmy: A Glimpse. Later, she played the role of Ally Maxwell in Knuckledust.

She has another upcoming movie to her name titled Case Closed Movie. In it, she will portray the role of Sammie. She is also the writer, executive producer, and director of the movie.

Furthermore, she has also partnered with PlayStation for video game commercials.

With such a successful career, it must be sure that she has garnered a healthy net worth. However, the figures are yet to be disclosed and are still under review.