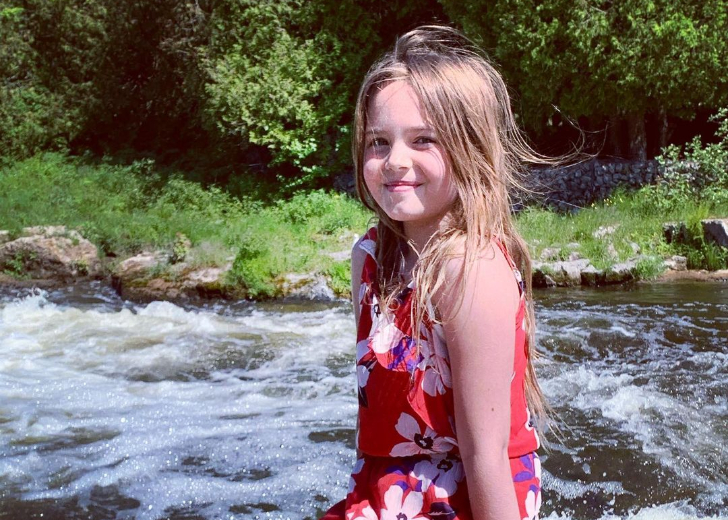 She is currently trending for her appearance in two recently released big movies; Amazon Prime Video’s The Tomorrow War (as Young Muri Forester) and Marvel’s Black Widow (as Young Antonia).

The child actress celebrates her birthday on the 10th of March every year. In 2021, she turned 11 years old.

Armstrong celebrated her 11th birthday in style with the cast and crew of the TV series American Horror Story. She shared some snaps from that day on Instagram and captioned it writing, “BEST. BIRTHDAY. EVER.”

Hailing from New York, United States, Ryan Kiera Armstrong was born on March 10, 2010. She was delivered at the Beth Israel Hospital in New York City. Her zodiac sign is Pisces.

Additionally, she goes by the nickname of RKA and Ry. As for her measurement, she currently stands at a height of 4 feet 5½ inches (1.36 meters).

Her Father Is Also an Actor

Meanwhile, her mother’s name is Berta Bacic who is a certified doctor. She has a good relationship with both of her parents and usually shares pictures with them through her Instagram handle.

Apart from her parents, it is reported that she has four siblings. Among the five children her parents have, she is the youngest of all. However, the details of her older siblings are not disclosed yet.

Her Acting Journey Started in 2017

Ryan Kiera Armstrong’s journey in the entertainment industry officially started in 2017 when she booked a recurring role of Minnie May Barry in the TV series titled Anne with an E (2017-19). Since then, she hasn’t looked back and has continued to play some amazing roles one after another.

In the next year, she played in two acting gigs; The Truth About the Harry Quebert Affair (as Young Nola Kellergan) and Benson (as Violet). She started 2019 with a titular role in another short movie, Athaliah.

In the same year, she made her big-screen debut through the movie The Art of Racing in the Rain—played the role of Zoë. Additionally, she appeared in two more movies that year; An Assortment of Christmas Tales in No Particular Order and It: Chapter Two.

In 2020, she added two more movies to her acting credits; Unicorn (as Mia Dindal) and The Glorias (as Gloria). This year, she has already made her presence felt by appearing in three big acting projects.

The first one is Amazon Prime Video’s latest Action/Sci-fi movie The Tomorrow War (as Young Muri Forester). The second is Marvel’s first Phase 4 movie Black Widow, released on July 7, 2021. In Black Widow, she portrays the role of Young Antonia, a character whose future self becomes one of the antagonists going by the alias ‘Taskmaster.’

Likewise, the third one is a horror TV series titled American Horror Story. In the show, she plays the role of Alma Gardener / Lola Gardener.

As of now, Armstrong has two more upcoming acting gigs; Maternal (as Sophie Talbot) and Firestarter (Charlie). The two movies are currently in the post-production and filming phase, respectively.

With such an amazing career at such a young age, Ryan must have accumulated a considerable amount of net worth. However, her net worth is still under review.

Who Is DeObia Oparei's Wife? A Look Into 'Loki' Star's Brief Biography