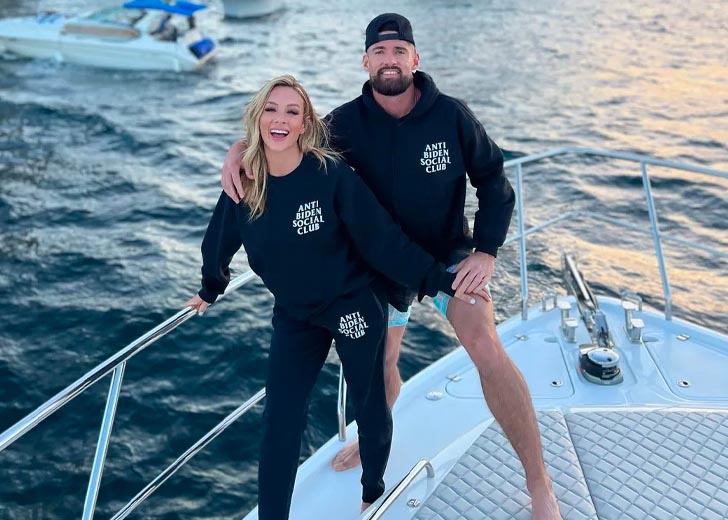 Paige Hathaway is an internet personality who meteorically became an online sensation and a fitness icon. She is presently an entrepreneur and fitness cover model who is continuing her journey in the fitness world.

And accompanying her throughout the whole journey is her life partner and future husband, Jason Moritz Sebastian. Together, they are a power couple and could be seen hitting the gym as well as traveling around the world.

Hathaway and Sebastian have been together for a very long time. But, their story goes way back before they even started their relationships.

It was during their teenage years that the two first met each other — while attending gatherings in Dallas, Texas. In a conversation during the Pandanomics Podcast, they mentioned that they used to flirt but never expressed their feelings.

Afterward, the two got separated for almost 10 years. Later, their mutual friend, Jason, reminded the fitness model of Sebastian and asked if she could contact him for some business work. She obviously remembered him as she had a crush on him.

They got reconnected on social media and then when Hathaway came to Dallas one weekend, they got to meet again. And, as Sebastian said in the podcast, they have been “inseparable” since then.

However, the exact timeframe of those events couldn’t be said. But, it’s quite safe to say that they might be together since 2018 as Hathaway was with another man during the mid-2017.

As time passed on, the two continued to stay together and hold each other’s hands through thick and thin. On June 7, 2019, Hathaway announced that she got engaged to her boyfriend Sebastian.

She posted a bunch of pictures and in the first one, she showed her engagement ring as she kissed her now-fiance. “I Said Yes,” was written over her palm. Additionally, other pictures showed how Sebastian proposed to Hathaway.

Earlier this year, on January 14, the two had made a joint Instagram post mentioning that they had planned their wedding. Their post’s caption hinted that they would get married 99 days later, i.e., on Saturday, April 23, 2022.

In another joint Instagram post on January 19, they mentioned that only 13 weeks were left until they shared the wedding vows. That would mean that they would get married on Wednesday, April 20.

However, although the month of April has already passed, there has been no news of Hathaway and Sebastian tying the knots. Both of them aren’t that private and have shared small to big details among their well-wishers.

One could only think that their wedding might have gotten postponed due to some undisclosed reasons. But, not to worry, as the fitness icon and her future husband are still together and they might get married sometime this year.

Paige Hathaway and Jason Moritz Sebastian are parents of one

Before the love birds even got engaged, they were all set to welcome their first child together. On April 19, 2019, Sebastian posted a picture with Hathaway to announce that they were expecting their first kid.

Paige Hathaway with her fiance, Jason Moritz Sebastian, and their daughter (Photo: Instagram)

In the picture he shared, he was holding Hathaway as she held a picture of her fetal ultrasound. Similarly, Sebastian was wearing a black cap in which “DAD” was written.

Sometime after they announced the pregnancy, they did a gender reveal party and found out that they will be welcoming a daughter into their family.

Months later, on Friday, September 13, 2019, Hathaway gave birth to her baby girl named Presley Marie Sebastian. Following the birth of their daughter, the duo has done everything to raise their kid in the best way possible.

Before she once again met her now-partner Sebastian, Hathaway was in a relationship with a Bachelorette alum named Chase McNary for a brief time in mid-2017.

The news of their togetherness was broken by McNary himself during an interview. He had mentioned that he was seeing someone due to which he couldn’t join Bachelor in Paradise.

While he refused to reveal further details of the person he was romantically involved with, people on the internet were quick to do the digging, piece together the things on McNary’s social media handles, and come to the conclusion that the woman he was dating was Hathaway.

Later, he confirmed his relationship with Hathaway and stated that their bond was in the initial stage. However, it seems like they weren’t able to make it work as they eventually parted ways as silently as their relationship started.

In November 2017, Hathaway was linked to Casper Smart – Jennifer Lopez‘s ex-boyfriend – after they were seen during their romantic getaway in Miami. Nonetheless, it wasn’t confirmed whether they were dating or not.

One month later, the fitness model expressed to The Cosmopolitan that she desired to get married and welcome children. And sometime later, her wishes seemed to be fulfilled as she got a husband-like partner in Sebastian and welcomed a daughter with him.