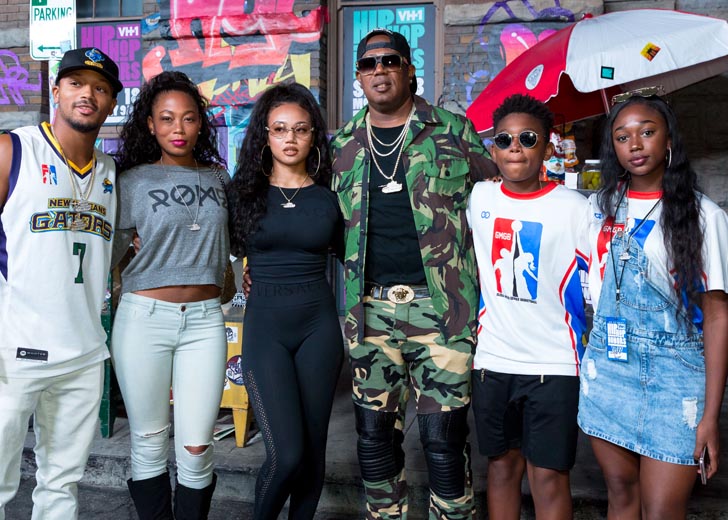 Percy Robert Miller Sr. is a renowned American rapper, record executive, and actor who is best known by his stage name of Master P. Thanks to his works since the early 1990s, he is considered one of the wealthiest hip hop artists in the United States.

Outside his professional life, Master P is a family man and a father to nine children. Among his nine kids, he shares the most with his ex-wife Sonya C — a reputed singer on her own.

Percy Romeo Miller, or Romeo Miller only, is the eldest child of Master P and Sonya C. He was born on August 19, 1989, and was initially raised in the suburbs of New Orleans, Louisiana.

Romeo followed the footsteps of his father since his childhood and used to go by his stage name Lil Romeo. He started gaining fame when he started making music under his father’s Limit Records.

Romeo is presently a business and has founded several musics and record labels, such as Guttar Music, The Next Generation, Take a Stand, and No Limit Forever Records.

Additionally, he has appeared on the television screens a couple of times, appearing in the Nickelodeon show titled Romeo! (from 2003 to 2006) and co-hosting The Mix on Fox Soul.

Coming over to his personal life, he is in a romantic relationship with his girlfriend named Drew Sangster. On February 15, 2022, the couple welcomed their first child, a daughter, whom Romeo calls Baby R.

Vercy Miller is the second eldest child of Master P and Sonya C. He was born on July 26, 1991, and also goes by the nickname of Young V.

Like his father and older brother, Vercy once stepped foot in the entertainment industry and made his appearance in multiple movies, including The Team, Decisions, and I Got The Hook Up 2.

As for whether or not he is involved in the music industry, The Sun has reported that Vercy might be a part-time producer and DJ.

Besides that, not much information could be found about him as he rather lives a private life. He could be found on Instagram where he has presently garnered around 16,700 followers.

Distractify reports that Master P adopted his brother’s son with Sonya C after Kevin’s death in a robbery in 1990. And although Veno isn’t his biological child, Master P has always regarded him as his own child.

Veno has been somewhat active in the entertainment industry and has appeared in multiple movies and TV shows such as Zoey 101, Master P’s Family Empire, LaLa Land, and Victorious.

In 2021, he got his major break after playing one of the major roles of Carter Conley in his big-screen debut movie Malibu Horror Story.

Among Master P and Sonya C’s children, most people are quite familiar with the former couple’s daughter Tytyana Miller — she tragically passed away in May 2022.

Tytyana was born on June 15, 1992, and was on the spotlight multiple times since her birth. She mainly earned fame as the daughter of Master P and Sonya C, but there were also contributions from her works as an actress and model.

She was also known for her appearance on the WE TV series Growing Up Hip Hop where she opened up with her father and brother, Romeo Miller, about her drug and drinking addiction. And thanks to the support from her family, she was able to overcome those addictions.

On Sunday, May 29, 2022, Master P announced the death of his beloved daughter Tytyana. Some of his words were, “Mental illness & substance abuse is a real issue that we can’t be afraid to talk about. With God, we will get through this. #MyAngel.”

Intylyana Miller is another child of Master P and his ex-wife Sonya C. Apart from her birth name, she is also known by the names of Inty and Princess Inty.

Her debut single came in 2017 when she released ‘That Real Love.’ Her first song was successful and Inty followed it with the release of her second single titled ‘You Know I See You.’

Similarly, some of her other songs are ‘For Better Or Worse’ and ‘Whatever It Takes.’ Furthermore, she has appeared in movies such as A Mother’s Choice and I Got The Hook Up 2.

Cymphonique Miller, aka Cymphonique, is another daughter of Master P. However, her biological mother isn’t Sonya C, and the name of her mother is yet to be publicly revealed.

Born on August 1, 1996, she was initially brought up in San Francisco, California. Like her other siblings, she is also involved in the field of music and acting.

To this date, she has released one mixtape titled Passion, one EP titled No Days Off, and numerous singles, including ‘Takin’ Over,’ ‘All About Tonight,’ ‘My Everything,’ and ‘Been Through It All.’

Speaking of her career as an actress, she has appeared in movies and TV shows such as Phineas and Ferb, Opposite Day, Big Time Rush, Winx Club, How to Rock, The Dempsey Sisters, and Never and Again.

Itali Miller is the sixth child of Master P with his former wife Sonya C, and the rapper’s seventh child in total. She was born on May 6, 1999.

Itali is one of Master P’s children who hasn’t actively pursued a career in the music or acting industry. She has only appeared in the 2010 short movie A Mother’s Choice and the 2019 movie I Got the Hook Up 2.

As of now, it’s unknown what she does for a profession. Nonetheless, as she is only 23 years of age, it might also be possible that she is focusing more on her studies rather than finding a job.

She is active on Instagram where she has amassed around 28,000 followers. Her Instagram bio reads: “A young woman who possesses the quality ‘It’; absolute attraction.”

Hercy Miller is one of the youngest children of Master P and Sonya C. He was born on March 28, 2002, in California, United States.

Unlike his brothers and sisters, Hercy has completely remained off the music and acting industry. Instead, he is a rising and talented basketball player who is presently playing for Xavier University’s Men’s basketball team.

As per Nashville Tennessean, Hercy had transferred from Tennessee State in 2022 after he landed a $2 million Name, Image, and Likeness deal.

As for how talented he is to receive such a big deal, his head coach, Travis Steele, had to say this in January 2022, “I think he just decided he wanted to try to experience something different in college basketball. He’s a great young man, comes from a really good family.”

Mercy Miller is the youngest of nine children of Master P — his biological mother is Sonya C. Born in 2005, he celebrates his birthday every year on September 13. As of now, he is 16 years of age.

Like his older brother Hercy Miller, Mercy is also a fan of basketball and could be seen playing the sport for his high school team.

In January 2022, he took a transfer from Minnehaha Academy to Oak Hill Academy. He is one of the rising aspects of the game and has a bright future ahead of him.

Speaking of his youngest, Master P said this in an interview, “Growing up he [Mercy] was able to go to a lot of the games and see a lot of the greats play there and Coach [Kelvin] Sampson he is a man of his word.”

In the end, Master P mentioned that Coach Kelvin is building a great program and by the time Mercy graduates, he’ll be a big part of that.