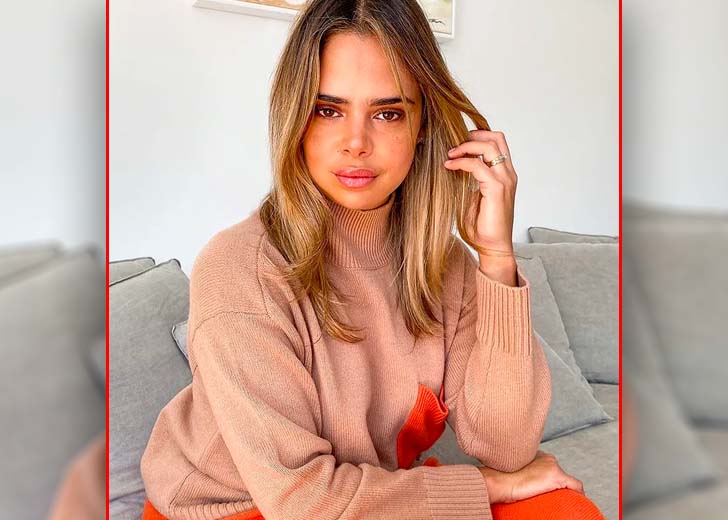 Australian fashion model Samantha Harris rose to international fame at the bare age of 13 when she overthrew other contestants to win the Girlfriend Magazine Covergirl competition.

Since then, she has been on the rise and has continued her modeling career. She has been featured multiple times on some prestigious magazine covers, such as Australian Vogue, Harper’s Bazaar Singapore, and Façon Australia.

Thanks to her talents, she has earned ever-growing popularity, and now people are curious to learn more about her. Among many things, one is Harris’ personal life. So, here is a look at it!

In the early 2010s, people were aware that Harris was in a romantic relationship with her boyfriend Luke Hunt and that the couple had gotten engaged.

Years later, speculations came floating on the internet, mentioning that the engaged duo had shared the wedding vows. However, those rumors stayed as such until it was confirmed by Harris herself in 2016.

In late October 2016, the Aussie model spoke exclusively with Marie Claire Australia, where she finally spilled the beans about her marriage. Harris mentioned that she and her fiance had tied the knots in a secret wedding ceremony in March 2014 but decided to keep it a secret.

Speaking more about her intimate wedding to Hunt, she said, “My family was there, Luke’s family, and a few of our close friends. It was more like a family gathering or a Christmas dinner, full of love and support.”

Harris and Hunt decided to write their own vows. For her wedding day, the bride opted for a white, strapless Carla Zampatti dress which was offset by a simple bouquet of roses and lilies.

Since they got married, the couple has been inseparable and held each other’s hand through thick and thin. As of now, the two have been married for more than eight years, having celebrated their eighth wedding anniversary in March 2022.

Harris could be seen flaunting some cute selfies alongside her partner via her Instagram handle. Similarly, the married couple is occasionally seen going on outings in the streets of Sydney, however, they often keep their relationship private.

Harris and Hurt presently reside in Sydney, New South Wales, with their pets. The couple is yet to welcome any children.

Sometime before Harris and Hunt’s marriage, the then-engaged couple was going to a gym at Sydney’s Northern Beaches. It was the weekend and there was bad traffic, due to which they had to take a different route to the gym.

Additionally, Hunt was overspeeding and driving 30 KM beyond the speed limit. He ultimately ran an amber light and the vehicle collided with a car that was being driven by a 78-year-old local resident named Kenneth Lay.

In another conversation with Marie Claire Australia, Harris mentioned that she and her husband had a busy schedule at the time. “Everything that could go wrong did that day. I was texting on my phone and had my head down, so I don’t remember the actual accident  – I think my body went into shock and I fainted.”

When she was conscious and saw what had happened, she started freaking out. “I didn’t know what was happening. Luke was in a lot of pain (with suspected spinal fractures) and thought he was dying,” she added.

Paramedics were there immediately and they rushed all three of them to the hospital. Thankfully, nothing serious had happened to Harris and Hunt, but they were devastated after learning about Kenneth Lay’s passing.

Harris said, “The police came in and said Mr. Lay had passed away. Luke was in shock and started sobbing, he couldn’t believe it.”

Police charged Hunt with dangerous driving that resulted in a death, and he was eventually sent to two years in prison. And as the pair were to be separated for two years, they deemed it perfect to share the wedding vows.

Their wedding was held two months before Hunt was sentenced to prison, in March 2014. However, they decided to not reveal their wedding news and keep their wedding low-key as well out of respect to Kenneth Lay and his family.

Harris told Marie Claire, “We had been engaged for a few years and were planning to get married. Would our wedding have been bigger under normal circumstances? Probably not, but I would have posted a photo or something on social media.”

In May 2016, Hunt was released after completing his time at the Muswellbrook minimum security prison, and Harris and Hunt’s mother was there to pick him up.

Hunt started working again after being released and some months later, he surprised his wife with dinner with the money he had saved. “We stayed a night at the Shangri La [Hotel] in the city,” Samantha said.

She continued, “And somehow he had organized for us to have dinner at Tetsuya’s restaurant. I was in shock. I hadn’t ever had anything like that done for me. It was like the honeymoon we never had.”

As of now, Hunt is a changed man and they have tried their best to move on from the tragic incident. Harris said, “We don’t talk about the accident much because I can’t handle it, but I know he feels deeply for Mr. Lay’s family and always will. I wish we could bring him back but we can’t. Something like this hurts so many people.”

Who Is Lauren Parsekian? Know Her Family, Husband, and More