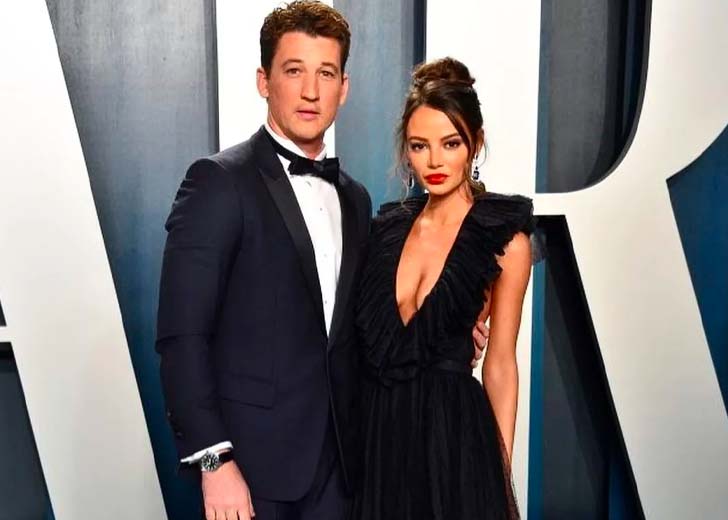 Keleigh Sperry Teller, aka Keleigh Sperry, is a successful model. She is mostly known among the media and public as the longtime girlfriend turned wife of American actor Miles Teller.

Keleigh and Miles have been married for a long time, and have already completed two years of marital togetherness. Continue reading to know five facts about Keleigh!

1. How old is Keleigh Sperry?

Sperry is presently 29 years of age. She celebrates her birthday every year on October 16. Her date of birth suggests that her zodiac sign is Libra.

On October 16, 2021, the model turned 29, and she celebrated her special day with her family. She shared several snaps and a clip taken alongside her family members.

Born in 1992, Sperry was raised in the suburbs of Orange County, California. Her birth name is Keleigh Rand Sperry. Besides these, there aren’t many details available about her early life.

As mentioned earlier, Sperry celebrated her 29th birthday with her family members, and her family is a bit big in number.

Her father’s name is Rand Sperry, and her mother’s name is Rosemary White Sperry. Currently, there is little to no information available about the model’s parents and their profession.

Apart from her parents, Keleigh has five siblings named Katie Sperry, Michelle Sperry, Brian Sperry, Christie Sperry, and Kevin Sperry. In her Instagram post of October 2015, she revealed that she is one of six children of her parents.

While sharing a picture alongside her siblings from a wedding, she wrote, “My siblings and our significant others. When there’s 6 kids, it quickly becomes 12 and I love it! Love you guys!”

Keleigh still has a healthy bond with her parents and siblings as well. She could be seen flaunting multiple pictures alongside her family members via her Instagram handle.

In his 2019 interview with Vogue, Teller mentioned that he and Sperry had mutual friends in The Black Keys, and they were at the rock duo’s party in 2013. When Teller first saw Sperry, he instantly fell in love with her.

He told Vogue, “Keleigh had caught my eye early in the night, and we talked. I didn’t think it went well, but after a few more attempts, I got her to dance with me, and a week later, we went on a date. After we met, I knew she was the one.”

They officially started dating on May 11, 2013, and only took another step in their relationship years later. On August 20, 2017, Teller proposed to Sperry while they were on a safari in South Africa – she said yes and they got engaged.

“I’ll never get the image out of my head of him down on one knee with a tear in his eye. He really thought about every detail and was so nervous!” Sperry told about Teller’s proposal.

More than two years after getting engaged, on September 1, 2019, they walked down the aisle and shared the wedding vows. Their wedding was a private one, and it was held in a Catholic church in Maui, Hawaii.

Keleigh Sperry and her husband, Miles Teller, at their wedding (Photo: Instagram)

Since their marriage, the couple’s bond has been stronger than ever. They are always seen together at multiple events. As of now, Sperry and Teller are embarking on their third wedding anniversary which is on September 1. The duo is yet to welcome any child.

4. Keleigh Sperry has a fair height

Sperry has a fair height as compared to her actor husband. It’s reported that the model stands at the height of 5 feet 7 inches or 1.7 meters – which is somewhat taller than an average American woman. As for her husband, he is 6 feet 1 inch or 1.85 meters tall.

5. How much is Keleigh Sperry’s net worth?

Unlike her husband, Sperry hasn’t been actively involved in the entertainment industry. She has only been a part of a few short movies and Taylor Swift’s music video I Bet You Think About Me (Taylor’s Version).

Coming over to her modeling career, she has been quite successful. Sperry has done photoshoots for several brands and has been featured in magazines as well. Additionally, she occasionally endorses through her social media handles.

Considering all that, she must have accumulated a decent net worth. However, the exact figures aren’t revealed yet, though some outlets have reported it to be around $500,000 to $1 million. As for her husband, Celebrity Net Worth has mentioned Teller’s net worth as $10 million.