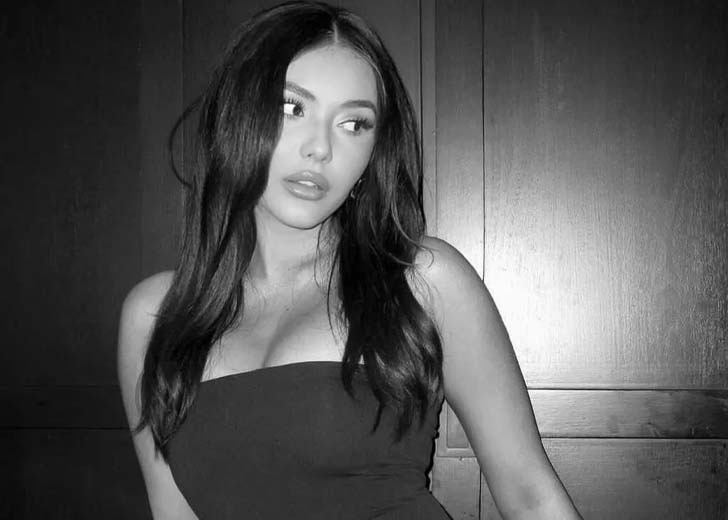 With Travis Barker and Kourtney Kardashian’s wedding in Italy, there have been several additions to the Barker family.

Shanna and Oscar started dating in October 1997 and just one year later, they announced that they were engaged. On March 29, 1999, the then-engaged couple went on to welcome their first child together: Atiana De La Hoya.

However, the duo’s relationship didn’t last long for a long time as they broke up in 2000. It’s reported that Shanna ended things with Oscar after she caught him escorting another woman at the Latin Grammy Awards.

Years after her split with Oscar, in October 2004, Shanna got married to Travis Barker. She and the singer welcomed two children whom we know as Alabama Luella Barker and Landon Asher Barker.

How many siblings does Atiana De La Hoya have?

From her biological father’s side, Atiana has a total of five step-siblings: two older brothers, one younger brother, and two younger sisters.

Going into the details of her step-siblings from her father’s side, Oscar was a father of two sons from two different relationships before he welcomed Atiana with Shanna.

Atiana’s first older stepbrother is Jacob De La Hoya, whom Oscar welcomed with his former partner Toni Alvarado. Jacob was born on February 18, 1998. As of now, it’s unknown what he does in terms of profession.

Similarly, Atiana’s second older stepbrother is Devon De La Hoya, whom her father welcomed with his now-former partner Angelique McQueen. Devon was born on November 30, 1998, and has followed the footsteps of his father to become a boxer.

The remaining three half-siblings were born after Atiana’s biological parents parted ways. When Oscar and Shanna ended their relationship, the former boxer went on to share the wedding vows with actress Millie Corretjer.

Among Atiana’s five half-siblings from her father’s side, she seems to be more close to her two older brothers. The American model could occasionally be seen pouring birthday wishes to her step brothers via her Instagram handle.

It has already been mentioned that Shanna married Travis Barker after her split with Oscar, and then they welcomed two kids.

Thus, Atiana has two step-siblings from her mother’s side: a brother named Landon Asher Barker and a sister named Alabama Luella Barker.

Landon was born on October 9, 2003, and Alabama was born on December 24, 2005. As of now, they are 18 and 16 years of age, respectively. Similarly, both of them are building a successful careers in the music industry.

As for Atiana’s relationship with Landon and Alabama, the three of them are very close. She could be seen flaunting pictures alongside them and sending them well wishes on their birthday.

Additionally, Atiana has a good relationship with her stepfather, Travis. Besides, she was mostly raised by Travis — a thing which Atiana’s biological father has also acknowledged.

The acknowledgment came during an Instagram Q&A session in December 2021 when Oscar was asked what he thinks about Travis’ claim that he raised Atiana. In reply, Oscar said, “I have nothing but respect for my man @travisbarker.”

As we said earlier, Travis Barker and Kourtney Kardashian’s wedding has brought some addition to the Barker family.

That’s because Kourtney has multiple children from her former relationship with her ex-boyfriend Scott Disick. Her children are Mason Dash Disick (b. 2009), Penelope Scotland Disick (b. 2012), and Reign Aston Disick (b. 2014).

So, now Atiana has three more step-siblings — meaning she has a total of 10 step-siblings. And considering that she is already bonding well with Kourtney, it might not take more time for her to establish a good relationship with her three new step siblings.

Is Ser'Darius Blain Married to a Wife? His Personal Life Explored