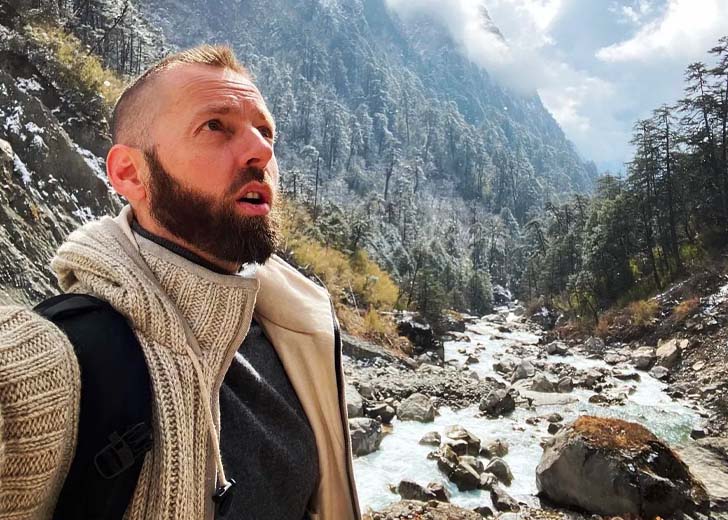 Popular Norwegian traveler Harald Baldr, aka Heraldo Baldieri, recently visited one of his favorite destinations, Nepal, and went straight into the laps of the Himalayas – located in the northern region of Nepal.

During his time at the Langtang mountain range, he also spent time at the Himalayan Hard Rock Cafe where he was greeted by amazing hospitality.

While he was there, he and the owner of the cafe, Kartok Lama, engaged in a long conversation. One of the topics they talked about was marriage, and Baldr also expressed the kind of wife he is looking for.

Harald Baldr talks about marriage in the Himalayas

On January 24, 2022, the traveling YouTuber uploaded one of his many videos while he visited Nepal and it was titled ‘Hard Rock Cafe Himalaya.’ In the 30th minute of the video, Baldr engages in a conversation about marriage with Kartok Lama.

He asked Kartok what were the procedures for marriage and how they find a bride or groom in her village. In reply, she said, “We are searching from another village.” “Because everyone knows each other in this village,” Baldr added.

After that, the YouTuber asked Kartok to ask an old woman who was sitting nearby them how she got married. “She went to India and her husband also went to India [where] they met and they [got] married,” Kartok replied after asking the old woman who spoke the Tibetian language.

Baldr then said that if he wanted to find a wife, he would have to go to another village. Kartok agreed and then stated that she would go with him and find a good wife for him. “Wife hunting next time,” Baldr said and they laughed heavily.

After some time, another woman in her early or late 60s came and joined them. The locals nearby them mentioned that she is ready to marry Baldr. “Apparently, she’s ready. Does she like my pale complexion or do I need to tan up a little bit?” the YouTuber asked.

“All right they set me up in the village. I might never leave,” Baldr funnily added. All of them talk more about the said marriage and joke about it as well. Then, Baldr pointed out to his tea and said, “I’m glad there’s no alcohol in this tea because I might actually do it.”

Harald Baldr at the top of one of the mountains in Lantang, Nepal (Photo: Instagram)

A local then asked if Baldr would like some Raksi [alcohol], and the YouTuber responded by saying that he won’t have it today because “things will happen.” Kartok also offered some rice beer all of them were about to share, but Baldr again declined it by mentioning that he is still recovering from the food poisoning he suffered.

Later all of them had more conversation and fun. “Oh man they’re trying to they’re really pushing for the marriage in there,” Baldr said as he left the cafe. He then jokingly told Kartok, “You’re the worst one.”

Afterward, Kartok took Baldr to the place he was going to spend the night. More conversation took place after reaching the place.

Is Harald Baldr married to a wife?

For some time, Baldr’s fans have been wanting to know if the YouTuber has a wife or not. And the answer wasn’t known, it has now been answered.

In the 32-minute and 58 seconds of the same video, a local man asked Baldr if he is married yet. In reply, he said that he is yet to share the wedding vows.

Kartok then asked Baldr if he is looking for Nepali ladies or ladies from other countries. “I don’t know. I was kind of thinking like an American with a gun or something but I don’t know we’ll see. You never know what happens,” Baldr replied.

Later, Kartok again asked Baldr the perfect age of the woman he is looking for. He replied by saying, “My whole life perfect age of a woman has been 29. When I was 19, I liked girls that were 29. Now that I’m 40, I also like girls that are 29.”

So, that’s it on Baldr’s conversation on marriage with the people of the Himalayas and some of his views on what kind of woman he is looking for. The video also clarified that he is single and doesn’t have a wife or a girlfriend.